Diving in the Deep

Diving in the Deep

The day is hazy, but the sky is percolated with bright rays of sunlight. The lake is covered with dense layers of mist which separate from the surface of the water and rise into the air, leaving a wavy outline that resembles a mountain or an island from a distance.

The mist slowly disperses, and light gradually penetrates down to the lake until the still water reflects the deep blue sky and the rolling white clouds. Hazy mountains appear in the distance—a beautiful landscape painting is unfolding in front of my eyes.

This is Qiandao Lake, a famous vacation spot close to Hangzhou. Tourists are attracted to this region of central Zhejiang province by the beautiful mountains, sweet spring water, and the delicacies that swim in the lake. They come in droves to drive or bicycle around the islands, and take in the scenery.

But there is one group of visitors who come here not to linger over the picture-perfect landscape, but to find a mysterious ancient city submerged beneath the water. 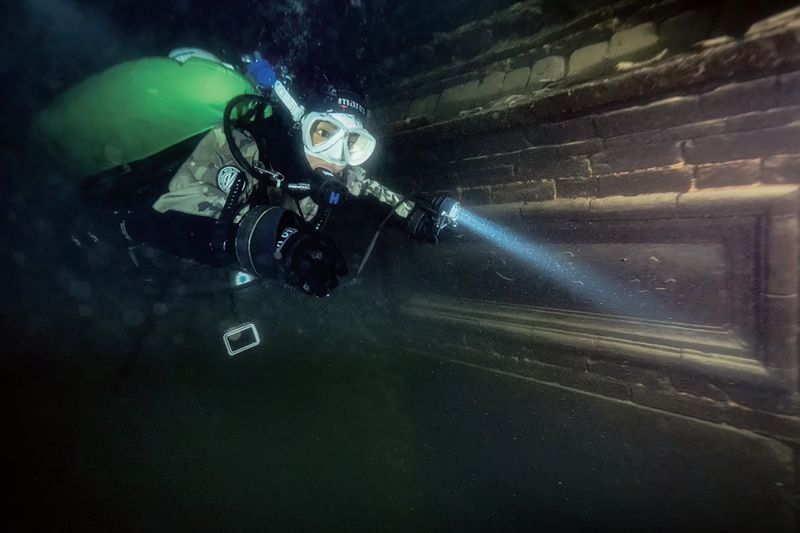 In Shilin Town, at the southwestern part of Qiandao Lake, a gas room’s pump rumbles as a group of technical divers test the gas content in the cylinders, debug their diving equipment, and change into their diving gear and wetsuits. They are getting ready to plunge into the cold, murky, dark green depths, and explore a ruin that has been silent for half a century.

I first came to Qiandao Lake in April of 2020 by pure chance. I had originally wanted to dive abroad, but Covid-19 scuppered those plans. My father and I took the high speed train from Shanghai to Jiande, where Mr. Yu, a Qiandao Lake local, met us and drove us along the Xin’an River toward Shilin.

The Xin’an River, which feeds Qiandao Lake, originates in Huining county, Anhui province, and becomes the main source of Zhejiang’s renowned Qiantang River after it intersects with the Lanjiang River in Jiande. The river stretches a total of 373 kilometers, and has been a source of life in the region for thousands of years.

Qiandao Lake, or Thousand Island Lake, is the name most non-locals are familiar with, and the one found on tourism brochures. But our destination has another, lesser-known name: the Xin’an River Reservoir. As we drove, Mr. Yu told us stories about the area where he had grown up, and talked at length about the construction of the reservoir. “A lot of people were forced to leave their home,” he said, “and most of them suffered a lot.” 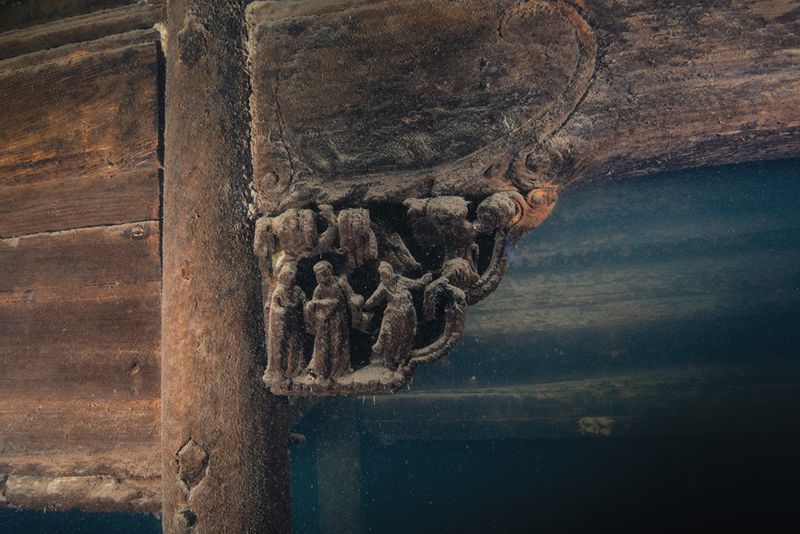 In April of 1957, in order to provide power to the population centers of east China, construction began on the Xin’an River Dam. As part of construction, the valley was flooded to create a reservoir, submerging over 1,300 towns and villages in two counties, Chun’an and Sui’an. The affluent communities in Chun’an, where the local population was concentrated, quietly sank to the bottom of Qiandao Lake, along with two historic towns: Shicheng (“Lion City”), which dates back to the Han dynasty (206 BCE – 220 CE), and Hecheng, which can be traced back to the Tang (618 – 907).

From 1958 to 1959, close to 300,000 people were forced to leave their homes and businesses, collecting just 298 yuan in compensation for saying goodbye to their hometowns. Many left in a hurry, with less than a month to discard their possessions, and traveled hundreds of miles by foot or train to resettle in Jiangxi and Anhui provinces. According to the book National Mission: The Fifty-Year Late Report of the Great Xin’an River Evacuation, published in 2009 by Zhejiang writer Tong Chanfu, many evacuees suffered starvation and schistosomiasis, and it was only after the reform period that the Chinese government gave additional compensation to these migrants.

Over 60 years later, the original inhabitants of the underwater towns and villages have scattered to the ends of the earth, while their former homes have become “China’s Atlantis”—a fun and challenging exploration for technical divers. 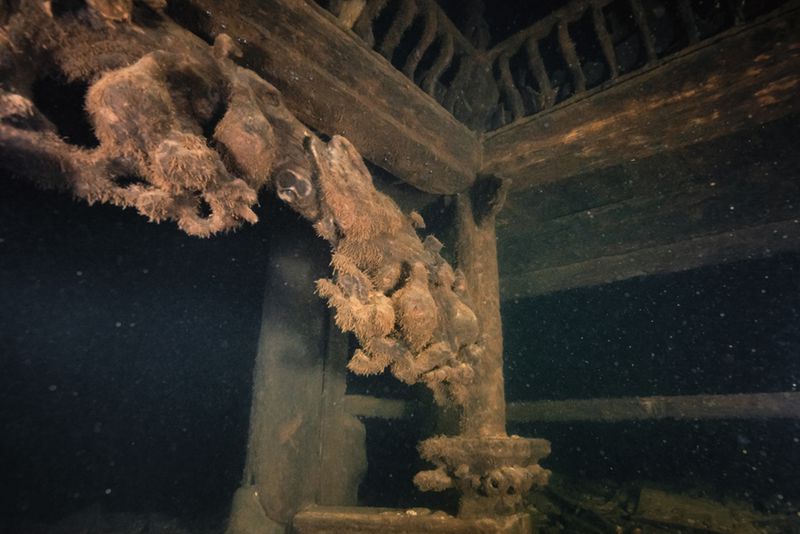 Diving in Qiandao Lake is far more difficult than in tropical divers’ paradises in the Philippines or Indonesia. In Qiandao Lake, the water can be frigid, with a significant drop in temperature every two to three meters you descend. Visibility is poor, too, and if the diver kicks too close to the lake floor, silt and dust sends everything into murky nothingness. At the deepest levels, sunlight struggles to penetrate the water, leaving divers cold, dark, and instinctively fearful.

So why do people endure these conditions to plunge the depths of one of Zhejiang’s most famous lakes? It has to do with the secret beneath the lake, the thrill of exploring an ancient city submerged forever. And the stories of people who can never return to their homeland is too seductive and fascinating to ignore.

My first dive in Qiandao Lake was a complete disaster. At the Qiandao Lake Diving Center, an experienced diver named Chen Xuan reminded me of the difficult conditions, and suggested that it might be better to use recreational diving equipment rather than more complex, heavy technical diving gear.

Scuba divers use a strict buddy system, and I partnered with two experienced technical divers on my first outing. But when I descended, water poured into my diving mask and blurred my vision. I was so nervous that I forgot to equalize the pressure in my ears, which left me in agony. Everything was in chaos, and I was so scared that I held onto a rock tightly underwater, my body shaking uncontrollably. 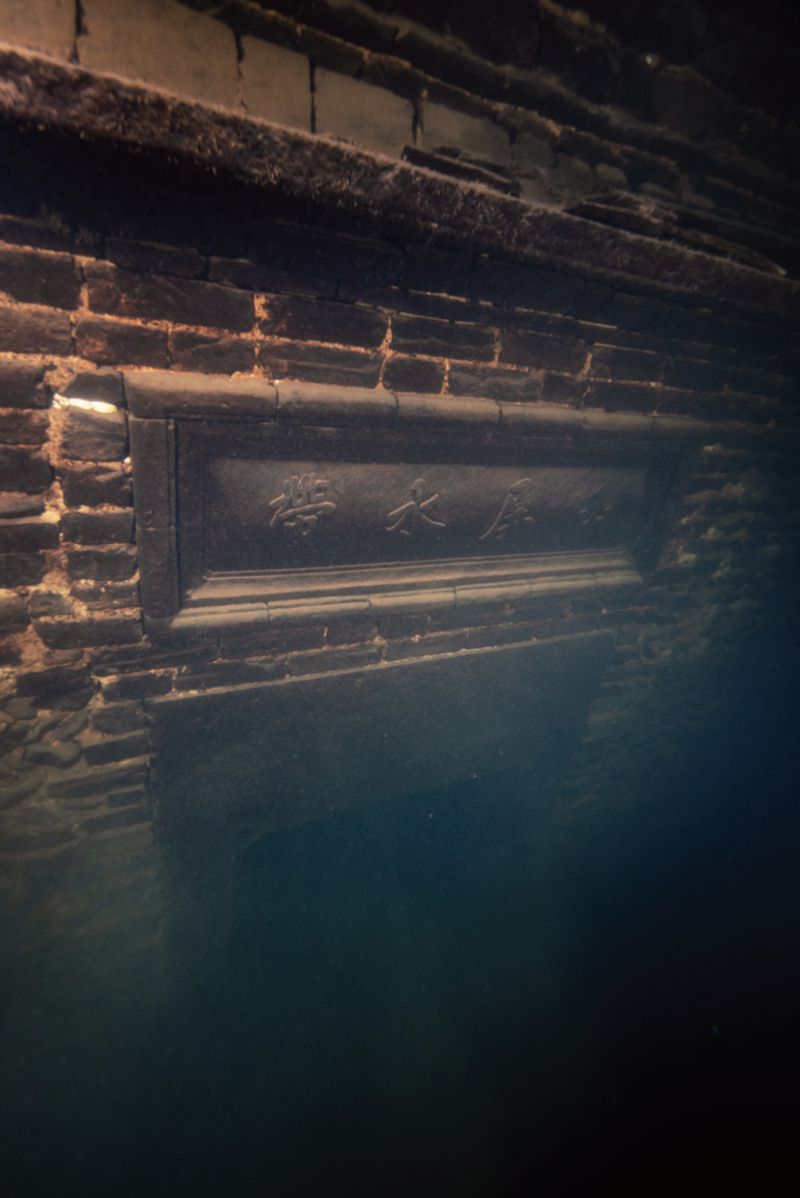 The “Mountain Screen, Water Belt” plaque is a must-see sight for divers under Qiandao Lake (Photo by Zhou Chun)

“You have to find a way to overcome your fear,” my father told me back on dry land. I decided to work on my diving technique, and organized a training course for myself back in Qiandao Lake at the end of May, spending 15 days practicing valve drills, safety drills, and kicking drills. Our training site was a sandy area with an average depth of 10 meters: no ancient cities there, only shoals of fish which swam among us.

At the end of June, I was ready to explore Xujiayuan, a historic village located 30 meters under the lake. With excitement and a small amount of fear, I embarked on the ship from the shore with a 50-kilogram diving kit, about as heavy as myself.

After finishing our pre-dive checks, my buddies and I followed the lay line that had been set down by previous divers to direct us, and dived down along the terrace. Three meters…six meters…10…20…and we were encroached by darkness completely. Our only source of visibility was from the primary light of every diver; without this, we could not even see our own fingers.

After nearly ten minutes of descending, obscure outlines of homes began to emerge in the distance. As we moved closer, the details became gradually clearer: stone walls, wooden roofs, intact patios, and window frames. The only difference from a village on land was that what moves between the buildings was not the wind, but water. The framework of these buildings was fragile after being submerged under the water for more than 60 years. We had to move cautiously to avoid damaging the ancient structures. Following the line, we arrived at a building with a patio. This building was around two meters tall, and is believed to be a branch building of an ancestral hall.

Above the towering lintel of the doorway, there is a stone plaque inscribed with the words “Mountain Screen, Water Belt.” This was probably taken from the poem “My Travels” by Zhou Boqi (周伯琦) from the Yuan dynasty (1206 – 1368), which goes, “A mountain screen spreads along the shore/ A water belt lingers through the sand.” There were even carvings inside the hall, so vivid that we could imagine hearing what the three men in ancient robes were murmuring on the beam.

The village was discovered by divers three years ago, and has already become a must-dive destination. “We have only managed to restore an old map of the area, and know very little about what is underwater. Sometimes, at a new diving site by the lake shore, you can find stone bridges, houses, memorial temples, and more,” Zhou Chun, an experienced diver, told me. “This is what makes Qiandao Lake so fascinating to me.” 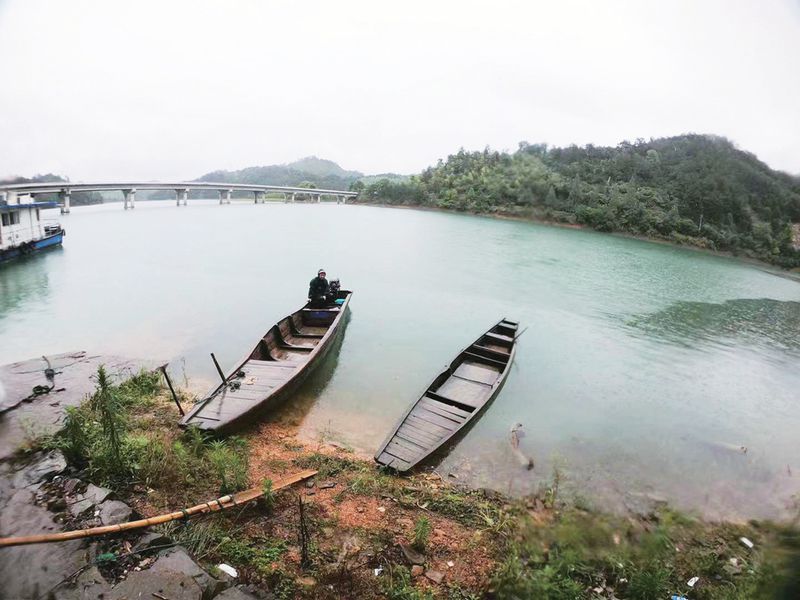 Zhou began exploring in 2016 after he came across a few houses belonging to Xujiayuan village during a dive, and then decided to stay on and unravel the details of this submerged hamlet. In 2017, after years of efforts by different groups of divers in underwater mapping, genealogy research, and interviews with local elders, the story of Xujiayuan began to emerge. Archeological studies show the village is at least 600 years old, and certainly dates from before the Ming dynasty (1368 – 1644).

After my first real taste of the underwater villages, I became obsessed. I spent almost every weekend from September to November at Qiandao Lake practicing my technique and exploring the ancient depths. With no way of traveling abroad, other diving enthusiasts from around the country have also descended on Qiandao Lake to get their underwater fix.

From the Qiandao Lake Diving Center, Chen Xuan and his diving friends continue to ask local elders for details of submerged villages and keep charting new discoveries in the lake.

In late September, they managed to find a collapsed ruin called the Longhua Temple. However, due to poor visibility, divers from the same center failed to find the same site when they explored another time. After several attempts, they accidentally found an underwater tombstone in the same area at a different depth.

“This is how underwater exploration works, with curiosity and constant trials and error,” Chen told me. “Countless secrets are still frozen in time below the waves. This lake area is too big; we might have explored less than one percent of it.”

Diving in the Deep is a story from our issue, “You and AI.” To read the entire issue, become a subscriber and receive the full magazine. Alternatively, you can purchase the digital version from the App Store. The Great Ride Of China

Two rogue motorcyclists attempt to take on all of China