Russian daredevils and staunch Canadian allies: How do the Chinese see other nations?

This summer, Chinese visitors were banned from taking colored pebbles from a Vladivostok beach: Locals claimed that “busloads” of boorish tourists had been grabbing free souvenirs, depleting the beach of its precious resource. Netizens joked, “Even the ‘warrior tribe’ is scared of Chinese tourists.”

The story invoked a clash of both cultures and stereotypes—bad Chinese tourists, warlike Russians—that the Chinese are happy to acknowledge. Often stereotyping themselves by region, Chinese are also adept at forming dubiously sourced, insulting, or just plain bizarre impressions across national borders. Why are Russian considered daredevils? Why do K-pop singers get so much hate? TWOC editors explain some classic national stereotypes below:

Many Chinese see Russians as a “warrior tribe”: a tough, stoic, slightly scary people. One of the common tropes of Russian resilience is the supposed ability of their pilots to land where only eagles dare—at smog-shrouded Chinese airports (on the subject of cliches: Chinese airports currently lead the world in cancelled flights and delays)

This trope was on display during torrential downpours this summer, as an Aeroflot plane was reported to be the only aircraft to arrive on time at Pudong International Airport between 8 a.m. and 10 a.m. in the midst of Typhoon Ampil. In previous examples of Russian carriers triumphing over bad weather, a Russian Airlines flight was apparently the only one to land at Beijing Capital International Airport during heavy smog in November 2016 (a story later debunked, since 11 other flights also landed), and another Russian plane reportedly landed solo in Beijing during last year’s July 14 thunderstorms. Aeroflot pilots are now apparently concerned about their reputation: “Safety is always more important than landing on time,” one of the airline’s pilot said in 2017.

For the most part, Chinese perceptions of South Koreans are negative. It’s mostly thanks to Korean Wave (hallyu) stars: Korean TV is popular among Chinese youth, who believe the melodramatic, exaggerated performances are authentic; K-pop stars like Rap of China judge Kris Wu are generally seen as effeminate (just one reason why Wu is widely hated is his membership of K-pop band EXO); meanwhile, its booming makeup and plastic surgery industries enforces a stereotype that Korean women wear too much makeup and surgically enhance their appearance (ironic, as these hospitals as widely patronized by Chinese).

There is also a long history of Chinese netizens calling out South Korea for “plagiarizing” cultural inventions as their own, as SupChina reports, a nationalist bent that is exacerbated by their football team’s inability to beat South Korea’s (or, to be fair, anyone, really).

This rabbit hole goes deep, but we will start with the long tradition of Japanese AV in China. When Xiaomi manager Qin Tao suggested last year that Zhengzhou University’s Japanese majors should “switch to film studies,” some interpreted it as a jab at Japan’s popular pornographic film industry. When not working in AV, Japanese women are full-time housewives; cute, sweet, obliging, and good at makeup and housework. By contrast, Chinese generally believe the men are male chauvinists who admire Bushido (or militarism) despite their shortness and thinness.

More positively, the Japanese are admired for their strict observance of laws and rules, such as garbage sorting, civility, culture, and craftsmanship. The latter has attracted Chinese consumers to travel to Japan and buy everything back to China, including toilet seats, cosmetics and rice cookers; those more culturally minded who deeply admire the country are said to be “Japanese in spirit.”

While most Westerners perceive Canadians as nice and polite, the Chinese don’t have a  particular stereotype for ordinary Canucks (unless it’s to confuse them with Americans). Instead, a few famous individuals come to mind:

All of these men have shown friendliness to China, usually at times when the country had few allies abroad. Dr. Norman Bethune was a surgeon who served with the Communist Eighth Route Army; after his death in 1939, he was memorialized by Chairman Mao in an essay, which became required reading in  PRC primary schools. Prime Minister Pierre Trudeau established diplomatic relationships with the PRC in 1970, almost a decade before the US. Mark Rowswell, better known as Dashan, rose to fame as a TV personality in the late 1980s—and stayed big for decades afterwards due to his serious study of Chinese language and cross-talk.

Thus, Canadians are “friends of China.”

The Chinese don’t really have any uniquely misinformed opinions about Americans: There are the classic images of the Wild West–everybody toting his or her own gun to the backdrop of beautiful blue skies—that have infused the cinematic depictions of China’s early20th-century warlord era. In other words, America is generally considered unsafe.

Before the bad Chinese tourist, there was the Ugly American: pudgy, loud, smacking gum, toting an oversized backpack, and wearing shorts, T-shirt, and flip-flops. Many Chinese who happen to travel to the US often find themselves returning weighing a few extra pounds, leading them to believe that all American food is unhealthy.

However, some Chinese hold irrational stereotypes and prejudice against America’s diverse racial and ethnic groups (as can be seen in disappointing advertisements.) Anecdotally, a TWOC writer has heard stories about Chinese tourists only willing to drive in taxis with “real [white] American” drivers. The joke’s on them, though, as they apparently had to wait a very long time.

In the eyes of Chinese, Italians, especially Italian men, are “honey-mouthed,” or good at flirting. No evidence to show how this stereotype formed, but people tend to interpret anything involving Italian men in a romantic way.

An Italian anti-violence video, in which several young boys were asked to hit a girl, went viral in China (all the boys refused, with one saying, “Girls shouldn’t be hit, not even with a flower”).

Though the video inspired debate—is it sexist to promote anti-violence in the name of “protection”?—a great number of netizens had their focus elsewhere:

Italian kids learn to flirt at such a young age

Is romance written into Italians’ genes?

A classic stereotype about Italians is their passion for body language (some even joke that, if you tie up their hands, Italians wouldn’t be able to talk at all). There’s one hand gesture in particular, ma che stai a di, “what are you saying?” or “what is this..?”

Don’t blame the Chinese; they’ve seen it too many times on their sports channels: 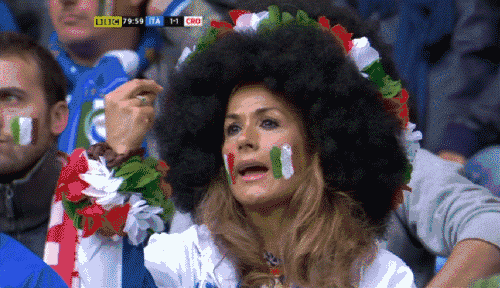 “What is this decision by the referee?” (Sohu)