On a cold morning in November 2017, 18-month-old Zhang Liwei was bundled into a car with two guardians, some cookies, a bottle, and a small toy. Arriving at a concrete building in Hefei, Anhui province, orphanage workers pointed Liwei at Sarah, a childless American woman with blonde highlights and glasses, and told him: “Mama.”

“It is such a surreal experience. We were brought together by processes and circumstances that we never could have anticipated,” Sarah recalls of the adoption. “It was tremendously sad and also beautiful.” Found on a sidewalk outside a furniture factory at two weeks old, Liwei had a recently fixed cleft lip, a hole in his palate, severe constipation, and a pathological fear of water. Still, when Sarah left the room that day, she already considered Liwei her son forever.

Statistically speaking, Liwei was one of the lucky ones. In 2016, only around four percent of children in Chinese orphanages and foster homes were adopted, according to a private study by Beijing’s Zhiyan Consultants. From the 1990s to the mid-2000s, when China became the world’s biggest “sender country” for international adoptees, that percentage hovered around 35 percent. However, political pressure both in China and abroad has led to a gradual tightening of cross-border adoptions, culminating in the State Council’s decision in December 2017 to no longer require donations from foreign parents wishing to adopt from China.

To would-be adopters in China, though, it’s Sarah, not just Liwei, who was lucky. For mainland families, adopting a child through legal channels is a monumental task. 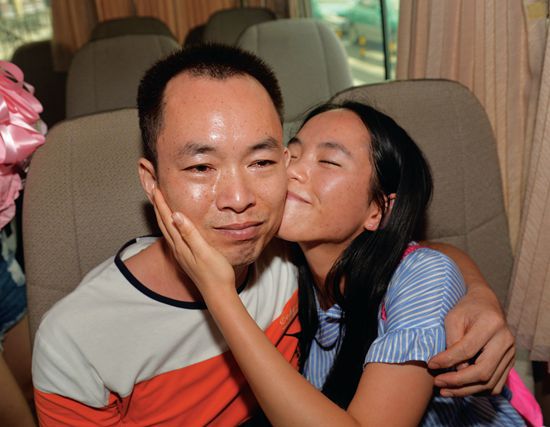 Liang Jing, a missing child who was adopted by an American family, was reunited with her parents 13 years later in 2018 (VCG)

According to Shaanxi family lawyer Fang Yan, who proposed to amend the PRC’s Adoption Law at the 13th National People’s Congress (NPC) in 2018, regulations are the major reason behind China’s low domestic adoption rates. “The laws have not kept up with our society’s needs,” she tells TWOC. “The threshold for Chinese parents to qualify is extremely high.”

The PRC’s Adoption Law, formalized in 1991, has been amended just once in the last 27 years—in 1998, when the minimum age requirement for parents was lowered from 35 to 30. Prospective adopters and adoptees both still face a rash of legal barriers to becoming a family. In order to be eligible, children must be under 14. They must be orphans who have lost both parents and have no other legal guardian; abandoned children whose parents cannot be traced; or children whose parents are unable to care for them, in most cases due to financial hardship or physical illness. Children rescued from trafficking, whose parents cannot be located, are one group that’s not eligible for adoption. They and others are raised in state-run orphanages under the Ministry of Civil Affairs, known as “children’s welfare centers” (儿童福利院), or by qualified families in “foster care” (家庭寄养). Private orphanages run by NGOs also exist.

The law is also adamant that adoptive parents must be childless, and can adopt only one child at maximum—a relic of the defunct one-child policy. Even biological parents in the countryside, who could sometimes have another child if their first was a girl, have more leeway, though several local governments have started offering the same exemption to adoptive parents in 2009. “I didn’t realize they’d rather let me give birth [to a second child] than adopt one,” a Ms. Hu, an unsuccessful adoptive mother from Changsha, sarcastically told the People’s Daily during the NPC meeting in 2015, when another delegate had tried to amend the law. 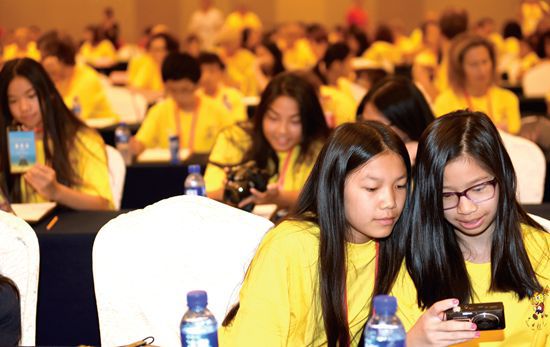 Each summer, government-run “heritage” camps are held in China for overseas adoptees and their families (VCG)

Barriers to legal adoption have been partly responsible for the high rates of child trafficking in China, as well as “gray” adoptions by relatives and neighbors—which are not tracked by official numbers, as they often involve unregistered children born in violation of family planning policies. There’s no official record, either, on the proportion of abducted children in orphanages and foster care, or children whose parents were tricked or coerced into giving them up, but such scandals have frequently broken out in China: In one infamous case in 2005, state-run orphanages in Hunan province was found to have bought at least 800 children from traffickers; another child-buying case involved an orphanage in Jiangxi in 2013, almost a decade later.

In 2017, the State Council began reforms to tackle such abuses in the adoption system. Donations to orphanages from international adopters were made voluntary, and had to take place after the adoption is finalized, due to concerns that they encouraged trafficking, coercion, fraud, and bribery. According to Love Without Boundaries, an NGO, orphanages had received “donations” of up to 50,000 RMB for a healthy child, leading to a belief, widespread on China’s online adoption forums, that Chinese adopters were getting “outbid” by foreigners with deep pockets—though both foreign and state media have refuted this, pointing out that Chinese society, collectively, is far from altruistic in choosing the children they adopt.

In the aftermath of the 2008 Sichuan Earthquake, for example, a China Youth Daily editorial lambasted the “selfish” citizens who flooded hotlines with offers to adopt earthquake orphans, but balked at giving a home to disabled children at local welfare centers. Though the government releases no official numbers on the latter, a 2013 Tencent News report cited Zhang Shifeng, president of the NGO China Center for Children’s Welfare and Adoption, estimating that 90 percent of children in state orphanages suffer some disability; Canada’s Globe and Mail has reported that disabled children make up as much as 98 percent of all China’s abandoned children. In 2014, a representative of Shanghai Civil Affairs Bureau told the Global Times that the city had a waiting list of 1,000 families to adopt a healthy child—but, since the new reforms, healthy children can no longer be adopted across China’s borders. 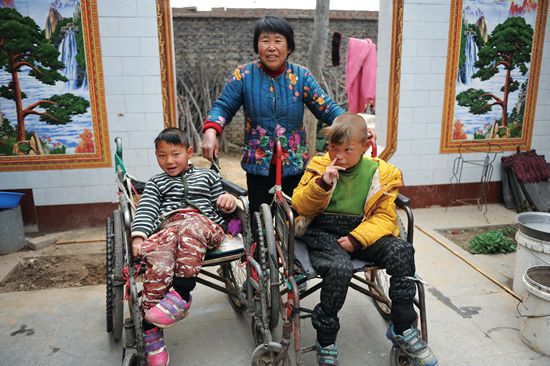 An overwhelming percentage of children in China’s orphanages are disabled, due to social and cultural factors that favor healthy children (VCG)

For Leslie Wang, professor of sociology at the University Massachusetts-Boston, the government’s reforms signal changing priorities for the PRC on the world stage. Formerly, “sending children abroad to join Western families has served as a form of ‘soft power’ [for the PRC]. Chinese officials have been able to enhance the nation’s image abroad, while also funding the local child-welfare system,” she claims in her 2006 book, Outsourced Children. “The new rules not only aim to regulate and restrict international adoption, but also encourage domestic placements.” Wang writes that rural families have traditionally desired males and able-bodied children to work and support  parents in old age, though girls also have been valued for emotional support.

Fang sees this preference for healthy children as mainly cultural. “While foreign families may think all children are angels…it’s a problem on the conceptual level with China,” she alleges. Public feeling is more complicated: In 2008, rebuttals to China Youth Daily’s editorial pointed out the many practical reasons why Chinese parents are reluctant to adopt disabled children, including the cost of health insurance and potential lifelong medical care, a lack of wheelchair and disabled access in China’s public spaces, possible discrimination at school and in the workplace, and the likelihood that the child could not provide for parents in their old age.

In 2015, the charity Future Smile estimated that surgery for a cleft lip and palate cost approximately 17,000 RMB, while the average Chinese family’s annual income was 21,587 RMB—yet in Wang’s book, an orphanage worker alleges that Chinese parents do not want to adopt children with cleft lips even if the surgery is free, due to the scar it leaves. 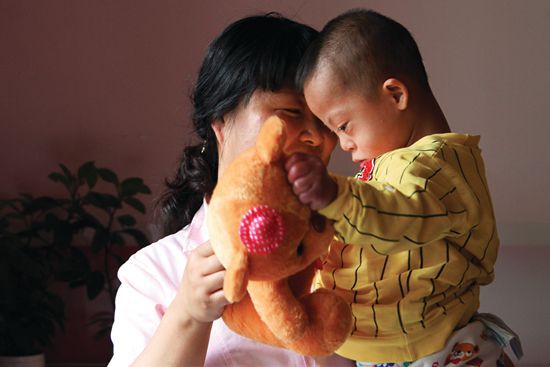 A caretaker feeds an orphan at a Lanzhou welfare center; her other duties include bathing and dressing the children (VCG)

These problems are complex, but Fang’s amendments, which were registered at the March meeting of the 13th NPC, could create basic changes: namely, raising the maximum age of adoption to 18, bringing the Adoption Law in line with what’s now the two-child policy, and making children in abusive homes eligible to be adopted. Regarding adoptive parents, she proposes to lower the minimum age requirement to 25, and enter parents into a tracking system for the child’s welfare after the adoption. In these proposals, she is finding unlikely allies among international activists—many of them adoptees themselves.

Grace Newton, like Liwei, was adopted from China by American parents more than 20 years ago. Through her blog “Red Thread Broken,” she advocates raising children in their birth country and community—and supporting changes to domestic policies, resources, and social conditions to make that possible. Newton tells TWOC she supports “a hierarchy of placement for children who cannot be with their birth parents: Kinship placement, then domestic adoption, then international adoption only as a last resort…whether a child is in an orphanage or is then adopted, some very devastating change has occurred in the child’s life.

“Adoptions are not destined to happen. They are the results of political and economic systems of oppression,” Newton writes in the introduction to her site. “I can acknowledge, as an adopted child, that I had opportunities,” she tells TWOC, “but at what cost?”

Some names have been changed to protect the identity of interviewees

Baby, Come Back is a story from our issue, “Modern Family.” To read the entire issue, become a subscriber and receive the full magazine. Alternatively, you can purchase the digital version from the App Store.

Rebecca Long Okura is a contributing writer at The World of Chinese.