Chinese influence is visible all around South Korea’s capital: In Seoul’s central districts, giant banner ads from education consultancy “guaranteeing” HSK 6-level Mandarin fluency in 30 days. In the cosmetics industry hub of Myeong-dong, saleswomen pitch face masks and perfumes to Chinese tourists in tone-perfect putonghua, while Daerim-dong, home to the city’s largest concentration of immigrants of China’s Chaoxianzu (朝鲜族) ethnic Korean minority, one can sample cuisine from all over China.

Yet one stronghold of Chinese culture and language in Seoul has been declining for the past two decades. Located in the northwestern district of Sodaemun, Seoul Overseas Chinese High School first began as a middle school in 1948, the brainchild of overseas Chinese businessmen in Korea looking to provide suitable education for their children. At the outbreak of war in 1950, the school was quickly relocated to the Busan Overseas Chinese Chamber of Commerce. Later that year, as South Korean and UN forces were cornered into Busan by the North Korean army, the campus hosted the soldiers, and the school transferred to a much more humble abode—a few tents on some foothills in suburban Busan. 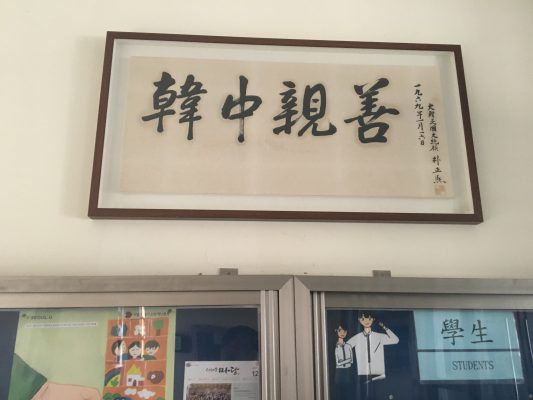 A Chinese calligraphy scroll offered to the school by South Korean president Park Chung-Hee in 1969. It reads “Korea and China, close friends”

After the end of the war in 1953, the school moved back to Seoul, added a high school, and received accreditation from the South Korean government in 1956. Since then, its growth and decline has been driven by historical shifts in Sino-Korean relations. As current headmaster Yu Zhisheng explains, at the time of its founding, the school was property of the ROC embassy in South Korea, who funded it in hopes of repatriating its students to Taiwan after graduation; a full-ride scholarship at a university in Taiwan was also thrown as a bonus.

The incentives worked. By the late 1970s, when Yu attended as student, the school reached a peak enrollment of 2,800 students. However, after decades of export-driven industrialization, Taiwan’s initial motivation to fund the school had also begun to fade away, bringing a gradual decrease in government funding until 1992, when South Korea decided to shift diplomatic recognition to the PRC and cut off economic support from Taiwan entirely.

Consequently, tuition fees began to rise each year. By the early 2000s, it had surpassed the average for private schools in Seoul, while the school nowadays has just over 500 students, an all-time low. Fees are no longer increasing but remain high nevertheless: around 9,000,000 Won (roughly 8,000 USD) per year. 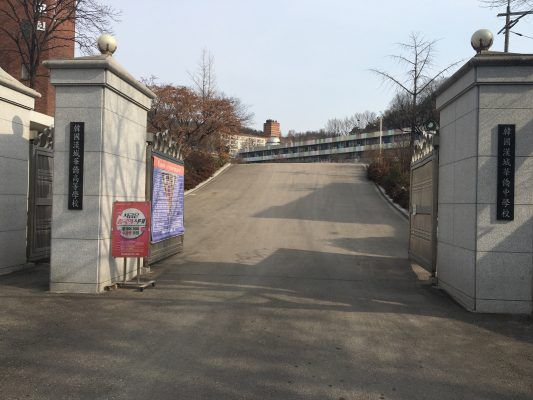 The entrance to the Seoul Overseas Chinese High School. The pink recruitment poster on the left reads, in Korean, “Now is the era of China”

In 2008, when global demand for Mandarin instruction was on a clear rise, Yu’s predecessor Sun Shiyi decided to open enrollment to South Koreans and other non-Chinese, who now make up around 20 percent of the student body. Yet persistent funding issues has led the school’s facilities to significantly fall behind competitors, such as the growing number of British or American international schools in the same price range: The soccer field, Yu explains with an averted glance, was a sandy pit rather than astro-turf.

Yu believes that the school status as a neutral ground in a vulnerable political region makes its survival all the more necessary. Since 1992, he states, the school has followed “pluralistic values centered around Confucian philosophy.” Most of the teachers are, like Yu, from the Chinese mainland, yet textbooks are a mix of publications from the Chinese mainland and Taiwan, and the school participates in a variety of functions held by both the mainland and Taiwan. The ROC flag is unfurled on the birthdays of Sun Yat-sen and Chiang Kai-shek, but no flag is raised when the ROC anthem is sung every Monday morning, as per the request of the PRC embassy. 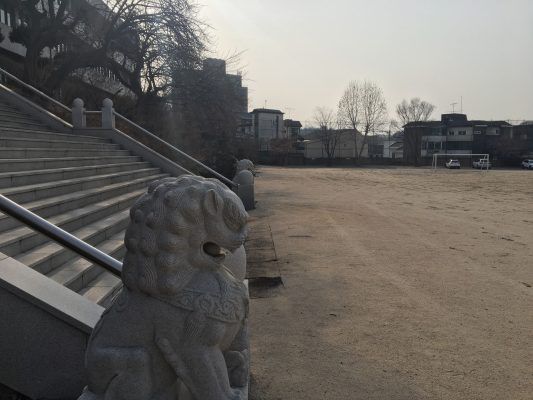 Paradoxically, the school’s decline takes place against the backdrop of massive migration flows from the Chinese mainland to South Korea since 1992.  The number of Chinese immigrants from the mainland to South Korea has increased by a staggering 22.5 times between 1990 and 2011. The Korean Statistical Information Service’s (KOSIS) found in its most recent population census of South Korea’s foreign residents that 76 percent of Seoul’s 245,000 immigrants are Chinese, of which 71.4 percent are Chaoxianzu; 23.7 percent of migrant are of other Chinese ethnicities, while only 4.9 percent come from Taiwan.

However, most of Seoul’s Chaoxianzu migrants single men and women looking to remit relatively high salaries to support family members back home. For the Chaoxianzu who have acquired permanent residence status, like the restaurant owners of Daerim-dong, sending their children to Korean schools is the logical choice. Other young Chinese tend to come to the country as university—rather than high school—students. 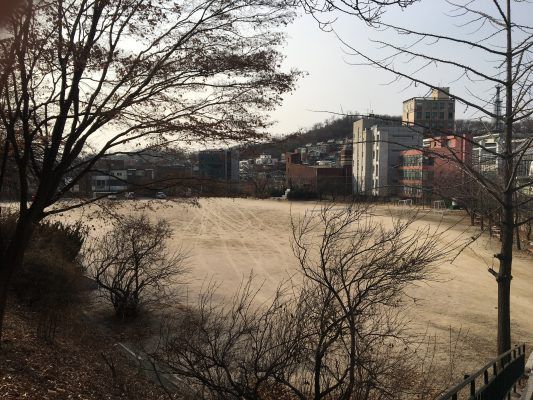 The school’s soccer field, a unmarked sandy field after the Board of Directors decided to remove astroturf

In the last decade, the Overseas Chinese High School’s main obstacle has been teaching university-level Korean and preparing its students to compete with native speakers in Korea’s university entrance exam, known as sunneung (修能). Last year, The Diplomat reported on the increasing number of Chinese students choosing to attend South Korean universities despite the difficulties they often face in overcoming the language barrier. Both Sun and Yu have encouraged their students to consider applying to less-selective universities in Taiwan, but the idea is unpopular with parents, who fear this will damage their children’s prospects in South Korea’s job market.

“The students and their parents are so concerned with not falling behind that they keep asking us to cancel activities related to Chinese culture in favor of more preparation for the sunneung,” Yu laments. He says he has persistently refused to do away with the bi-weekly Chinese calligraphy classes, as well as an annual yearly “root-searching” (寻根) trip to Shandong province.

Around 95 percent of non-Chaoxianzu mainland immigrants are from Shandong, including Yu himself. When South Korea and China butted heads last September over US deployment of THAAD in South Korea, Yu was distraught; the subsequent travel restrictions between the two countries led to the cancellation of the Shandong trip. 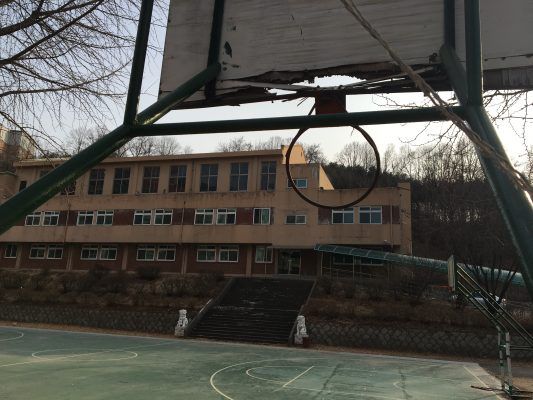 Many facilities in the school are in dire need of renovation

Yet in spite academic, economic, and political pressure, Yu is determined to stay true to the school’s origins. One corridor is lined with framed photographs of China’s most scenic spots; the school’s celebration of important dates in the Chinese calendar is documented on the opposite corridor. A wall that displays student features Tang Dynasty (618-907) poems, such as Li Bai’s (李白) iconic “A Quiet Night Thought” (《静夜思》), written in elegant in Classical Chinese, with delicate watercolour paintings to match.

Yun is counting on the growing number of Korean students looking to study in Chinese universities is going to replenish the school’s student body. “I want this school to keep doing what its founders wanted it do: help Chinese immigrants in Seoul integrate. But that doesn’t mean sacrificing Chinese for Korean,” he says.

He looks at the imposing statue of Confucius on the far side of the school’s sandy soccer field. “This,” he points, “is why our school is important; Confucianism is the rock of both countries. If a Korean student studies here, he won’t just be learning Chinese; he’ll learn more about his own country, in a way few others can.”