The Search for the River Goddess

The Search for the River Goddess

Each spring, when the weather is warm and waters are high, volunteers set out by the boatload in search of a “goddess.”

In April 2018, their efforts seemed to have been rewarded when volunteers snapped images of a white animal surfacing alongside a pod of finless porpoises, which several experts have since confirmed to be the baiji dolphin, declared functionally extinct since 2006.

A particularly complex section of the Yangtze River’s lower reaches, where multitudes of small lakes and channels branch off the main river, the Tongling Waters of Anhui province is one of the last places in China where researchers remain hopeful of rediscovering the lost “Goddess of the Yangtze.”

A freshwater dolphin that first appeared on the river 25 million years ago, the species’ extraordinary lifespan was believed to be over in the mid-2000s. There was once an estimated 6,000 baiji living in the Yangtze, but once China industrialized in the 1950s, it only took three decades for that number to dwindle to around 400.

By 1996, the International Union for the Conservation of Nature declared the species to be critically endangered, and a survey in the following year only turned up 13 dolphins. In 2002, Qiqi, the only baiji successfully raised in captivity, died alone in a special facility built by the Chinese Academy of Sciences in Wuhan, having failed to mate in its 23-year life. In 2006, a team of international researchers conducted a six-week search along the river that proved fruitless.

In the decade since, there have been various sightings reported by volunteers and local fishermen, but few were captured on film and video, and none were verified. A tentative sighting in 2007, eight months later, turned out to be a finless porpoise, and another in 2016 reignited hopes and headlines. Experts, though, pointed out that “functional extinction” does not rule out the possibility of leftover specimens—just too few to propagate the species.

Still, researchers aren’t ready to give up the ghost. Volunteers, supported by the China Biodiversity Conservation and Green Development Foundation and other NGOs, patrol the Tongling section 365 days a year, mostly keeping an eye out for polluting industries or illegal fishing methods. For the past two years, the foundation has organized bigger expeditions every April, bringing more boats, a camera crew, and local government representatives for weeks-long campaigns to spread environmental awareness—and perhaps, it is always hoped, spot a baiji or two along the way. 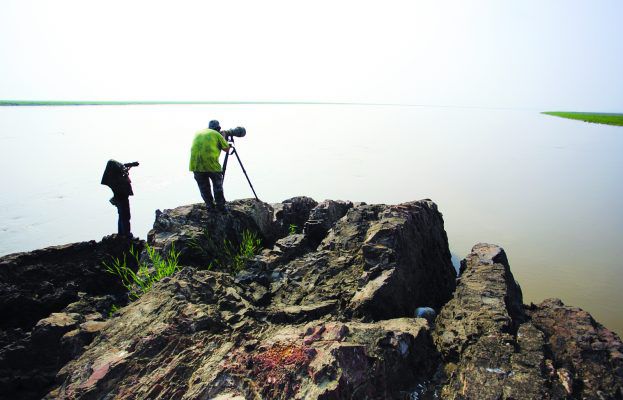 During April’s expedition, photographers were stationed both onshore and on the water to spot the baiji

“The baiji is the representative species of the Yangtze River…[and] a symbol of the biodiversity of the Yangtze,” explains wildlife photographer Zou Qian, leader of the the most recent expedition. “Its protection is about far more than the species itself.” Certainly, the species’ disappearance had far-reaching implications, as the baiji was the first large aquatic species to be declared extinct in the last 50 years, and the first as a result of human activity.

According to Zou, a member of his team had spotted what they believed was a baiji on April 15, but it was too far away to photograph. The first verifiable discovery would come three days later. “It was just after lunch, and a photographer spotted a pod of finless porpoises,” Zou recalls. “Beyond them, he saw a lighter-colored animal surfacing, but it was so pale, and the sun was beating down on the water at noon, so he had to point the lens at a porpoise, focus it, and then shift it toward the white animal as it surfaced and dove. Afterwards, we found two of the photos had captured what looked like a baiji.”

The images were verified on the spot by Li Xinyuan, an expert who accompanied the expedition, then rushed to the Shanghai home of retired biologist Hua Yuanyu. One of the first scientists to survey the species in the 1980s, Hua has often spoken of his belief that the intelligent species may be hiding from human activity in under-exploited sections of the river. “[Hua] was very excited, and decided right away it had to be brought to the IUCN’s annual conference in Estonia,” says Zou.

Scientists at the CAS Institute of Hydrobiology were more conservative. “In the photo, the snout was very distinctive, but its dorsal fin did not fully emerge from the water, so they could only deem it ‘highly likely,’” Zou explains. At present, the dolphin is still listed as Critically Endangered (Possibly Extinct) on the IUCN’s “Red List” of threatened species, though Zou heard that the organization will delay labeling the baiji as Extinct in the Wild.

Before the 1990s, conservation bodies used to declare a species extinct if it has not been seen in 50 years; now repeated surveys are required to show that there are no sightings or evidence of survival. If confirmed, the rediscovery of the baiji would be “affirmation of positive changes in the Yangtze’s ecosystem over the decade,” according to Zou, and indicate other surviving specimens, as the dolphins do not live alone in the wild. Nevertheless, it proves little about the long-term viability of either the species or the ecosystem.

Volunteers have little official power to make change, hard as they may work; a team will typically get up at dawn and spend the day on the water, scanning for environmental wrongdoings to report to a patchy network of local law enforcement and government departments. “Volunteers do not have the power to enforce the law; at most, they can try to persuade fishermen not to employ illegal methods, and spread awareness,” says Wang Lei, a local civil servant who joined the last expedition.

Occasionally, these encounters turn confrontational. “Illegal fishing comes from people’s desire to make a living, so when we tried to stop them, they’ve gotten violent,” says Zou. While the baiji’s extinction has been attributed to many causes—industrial and noise pollution, increased traffic, damming, and habitat loss—the most significant threat was illegal electrofishing, which shocks the mammal unconscious into drowning, and is believed to have been behind 40 percent of all baiji deaths in the 1990s. “Ultimately, what we hope is for locals to find alternative livelihoods.”

This is easier said than done. “My government office is responsible for publicity and education, while it’s the fishermen’s own towns that are supposed to be giving them economic incentives to change professions,” states Wang. Moreover, his hands are also tied: “If my office sees any illegal activity on the water, all we can do is to report the incident and leave it in the hands of law enforcement.”

Bureaucratic inertia has been at the heart of China’s problems prior to the extinction. In a 2006 article in Conservation Biology journal, conservationists Randall Reeves and Nick Gales accused China’s government of “weather[ing] the squall of occasional international outrage over the baiji’s imminent demise without making any serious investment.” At home, Xinhua recently declared the baiji to be an animal that “disappeared before our eyes amid 30 years of calls for protection from all sides.”

British zoologist Samuel Turvey, who took part in the failed 2006 survey, has also been skeptical about the recent baiji sightings; in an email to the Guardian in 2016, he suggested that the resources devoted to seeking “the ghost of the baiji” could be better spent on protecting species with a more reasonable chance of preservation—namely the vulnerable Yangtze finless porpoise, just over 1,000 of which are left in the wild.

In 2017, the China Wetlands Association condemned the Green Development Foundation’s offer of a 100,000 RMB public reward to anyone who can capture a verifiable photo of the baiji, and called on all expeditions to halt, asking, “How can increasing human activity [on the Yangtze] via repeated expeditions be called ‘green?’…and if we cannot find a baiji, does that mean we give up protecting the river?”

The volunteers disagree. “Speaking as a local, the rediscovery of the baiji has an emotional significance to us, and it’s useful from an educational standpoint—it shows that the efforts we’ve put into protecting the river over these decades have been effective,” Wang says.

Zou is somewhat more practical, pointing out that there have been talks of expanding the area of the Tongling Freshwater Dolphin Nature Reserve following April’s discovery. “Measures to protect the baiji aren’t just beneficial to the species itself, but also the environment as a whole. The baiji is simply a symbol that people rally around.”

The Search for the River Goddess is a story from our issue, “Home Bound.” To read the entire issue, become a subscriber and receive the full magazine. Alternatively, you can purchase the digital version from the App Store. A damaging delicacy and the borders of infestation An interview with Quan Li, founder of China Tiger Revival