“Every wisp of a breeze, it brings a tipsy feeling,” begins “I’m in Guizhou Waiting for You,” a 2013 ballad by Zhang Chao that has since become an unofficial anthem for the southwestern province.

At least, that’s how the directors of Guizhou Multi-Coloured Wind see it—the song is the closing number of the tourist-baiting nightly production at the Guiyang Theater, which showcases the talents of the province’s 17 ethnic minorities for time-pressed visitors looking for “that tipsy feeling.”

With a Cirque du Soleil feel, emphasizing acrobatics over culture, the show’s kitsch tokenization will certainly make some want to reach for the bottle. Fortunately, this part of Guizhou is famous for its so-called “three intoxications”—and I had been pleasantly punch-drunk on the first of these, “nature,” since arriving from Beijing. In contrast to November in the capital, when temperatures plummet and smog levels correspondingly spike, Guizhou winters last a week or two, at most. New arrivals are greeted by blue skies, sunshine, and a mild breeze straight out of the airport.

There was more to come, for the organizer of this trip was Maotai (or Moutai), China’s grandest and most iconic liquor brand.

Maotai, as various guides, salesmen, and museums would constantly remind us on this trip, is a product as close to the Chinese Communist Party as lips and teeth. In January 1935, a battered and depleted Red Army arrived in the town of Maotai during the Long March, craving rest for the wounded and merriment for the few soldiers unscathed from constant skirmishes with enemy forces. 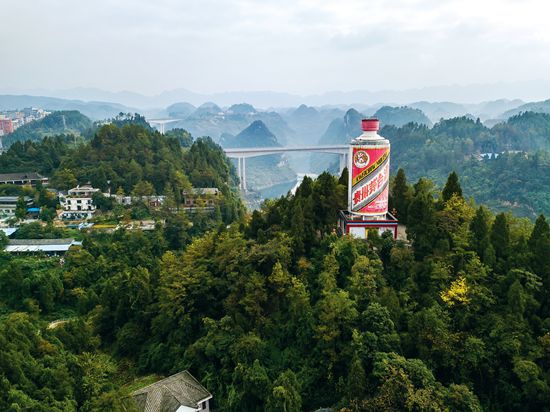 Maotai’s clear sorghum wine, or baijiu (“white liquor”), supplied both—the liquor was a potent disinfectant, and the Party’s top brass quickly took a liking to its fiery taste. On October 1, 1949 (now known as National Day), they cemented Maotai’s prestige by raising glasses of it at the founding of the People’s Republic.

Today, the famous firewater is an essential part of any ambitious CEO or government official’s toolkit, served at lavish banquets as a form of status-signaling, and frequently offered as a bribe. In 1972, Premier Zhou Enlai clinked Maotai-filled glasses with Richard Nixon on the latter’s visit to China; the PLA even enjoys its own high-end Maotai line.

“After this visit, you will fall in love with Maotai,” Li Baofang, the company’s chairman, assured us upon our arrival at the five-star Maotai International Hotel. “You will all take our name back to your respective countries, and share this precious gift with everyone.” Hoping to bump up global sales, the company has recently decided to start advertising to the growing number of foreigners in China, and invited a group of us on a five-day tour of the province.

The past few years haven’t been kind on Maotai: An ongoing anti-corruption campaign, which began in 2013, cut down on Maotai-swilling at banquets, and halved the company’s share price; the town’s GDP growth slowed for the first time in over two decades. Even the PLA announced an official cooling of relations: new dietary requirements sidelined alcohol over concerns that it damaged military prestige and capability, and suggested replacement beverages like Red Bull.

The company’s market value only fully recovered in late 2017, and the experience left a deep mark on its boardroom—a need to diversify the liquor’s appeal, in order to avoid being held hostage to the dangerous flux of politics.

Thus, Li heartily believes that Maotai should be rebranded as “ideal for foreign holidays, rather than confined to the Chinese calendar.” However, the thought of a French or Filipino family toasting Christmas with Maotai rather than red wine or rum sounded far-fetched.

Perhaps it was the natural intoxication of Guizhou at work. At Wanfenglin, the “Forest of Ten Thousand Peaks”, rows of karst hills stretch far into the horizon—even if not the “best under heaven,” as Guilin’s formations are famously known, their sheer number and inexplicable orderliness struck fear in my heart. It was like facing an army of giants.

Certainly, the closer our main tour guide, Mr. Huang, came to a scenic spot, the more incredible his stories became. Near the Huangguoshu Waterfall and nature reserve, China’s largest waterfall and the supposed birthplace of the Monkey King, Huang claimed that a famous Bouyei minority restaurant used to command a view of the waters (unlikely, given the dense foliage and treacherous terrain), and has supposedly cost the local government 80 million RMB (11.65 million USD) in compensation to relocate. Now, the falls are overlooked by a statue of Ming geographer Xu Xiake (徐霞客), the “father of Chinese backpacking,” who first came across these waters in 1638 and described them as “pearls crumbling, droplets surging back, like smoke rising in the air…the proverbial ‘beaded curtain hung from a distant peak’ is insufficient to describe their power.” 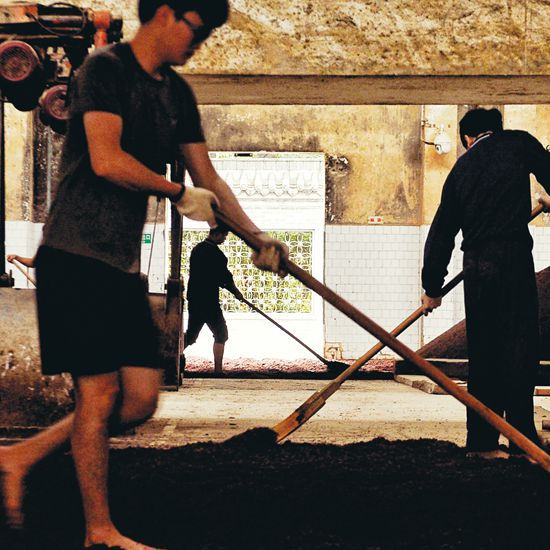 Our other two guides, both Miao women in their 20s, told tales that sounded no less fantastical. A particular topic of fascination was the alleged “third intoxicant” of Guizhou infamy—gu (蛊), an ancient poison most commonly associated with Miao women, who were once feared for their alleged mastery of the recipe.

Its exact constitution is shrouded in mystery, but gu is generally manufactured by carefully placing several venomous creatures (usually a centipede, a snake, a toad, a spider, and a scorpion) inside a sealed container. As the creepy-crawlies devour each other, the sole survivor will supposedly “absorb” all the toxins of the other four, thus developing a super-poison. Once extracted, this poison can be fed to an enemy, who will then die a most horrible death.

“The Miao mostly used it as a weapon against invaders,” says guide Chi Yu. “Our people didn’t have weapons like the emperor’s armies, so our men would secretly lace their supplies with gu.” Chi dubiously dates this practice back to 2500 BCE, when the armies of the Miao’s mythological ancestor Chiyou (蚩尤), a half-bull, half-man god-king, purportedly fought and lost to the combined forces of the Yan and Huang emperors in the Battle of Zhuolu, after which the Miao migrated to Guizhou.

The earliest case of fatal poisoning attributed to gu, though, was recorded in the fourth century BCE. Reports also proliferated during the Tang dynasty—though it wasn’t clear which deaths were really due to gu, and which to the tropical diseases which beset the imperial armies as they colonized the southwestern regions.

After the Miao rebellions of the Ming and Qing dynasties, the infamy of gu grew so great that, according to local government records, “it is the tribal women who [were] repeatedly cited as a source of danger, rather than armed men threatening the stability of Chinese rule,” wrote anthropologist Norma Diamond in a 1988 article in Ethnology journal. This fear lasted well into the 20th century. 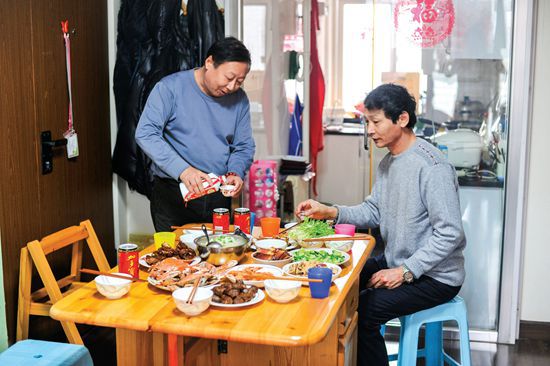 A family celebrating the Spring Festival with a bottle of Maotai

Even nowadays, it’s still rumored that isolated mountain villages in Guizhou are home to gu-brewers, though it’s hard to get an open admission. “Miao who make gu will usually keep it a secret, even from their family members,” explained Li Chunnan, our other guide. “It’s like admitting you have a gun or some other very dangerous weapon in your house—the neighbors won’t like it.”

Though Li was reluctant to introduce me to her rogue gu-brewing uncle (“I can’t guarantee he wouldn’t use it on you”), she took us to a market in Maotai where there were Miao vendors running a stall selling various homeopathic medicines made from venom. According to the stall owner, the most popular item was scorpion venom, applicable to literally any physical malady: Folk beliefs say that, while humans need to build up their immune system, the scorpion’s body is packed with antibacterial proteins that make it resistant to microbial infections from birth.

Nevertheless, there is no doubt that, throughout the trip, the greatest threat to safety was alcohol poisoning. The sales representatives accompanying us were relatively well-behaved, at first. At a Bouyei village visited by former Guizhou party secretary—and Chinese president—Hu Jintao in 2004, we quietly ate under the watchful eye of presidents Hu and Xi Jinping, whose pictures were hung in the dining room.

While the Bouyei waitresses kept coming back with more rice wine, chanting a discordant tune as they served, per local custom, one Maotai salesman waved them briskly away. I feigned outrage at the sudden halt of alcohol flow.

“We’re in the room where Chairman Hu ate,” the salesman rebuked, sternly.

The next day, over dinner at the hotel, though, the same salesman goaded a Korean guest to down a cup of red wine. Hesitant, she complied with his request, furrowing her brow over the wine’s acrid taste, while he re-filled her cup to the brim. I sat awkwardly, watching this struggle for two more cupfuls before intervening in the most diplomatic manner possible: offering a toast to the salesman. 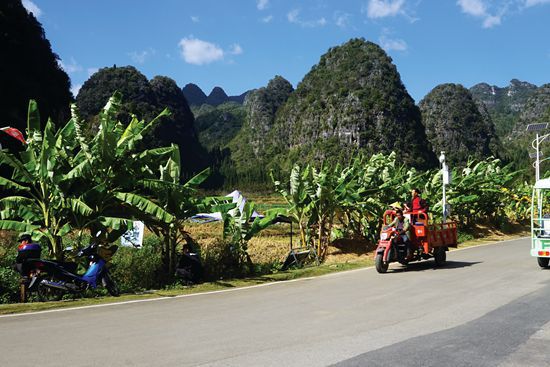 Karst formations are a feature of Guizhou’s landscape

The green light to consume Maotai was only tacitly given at a farewell party later. Many reviews praise Maotai’s “fruity body” and “aromatic aftertaste,” but, after the first sip, my unsophisticated palate could only appreciate the 53 percent alcohol make-up. A Maotai employee tried to educate us on how to correctly degust the liquor, but to no avail; by the time he had gotten to Step Two (“allow the liquor to rest underneath your tongue, so as to feel the full range of its aromas”), most had already chosen to end the pain by swallowing.

The firewater (literally—Maotai is flammable) does become easier to swallow with practice, and we were soon abandoning the tiny “bellflower” cups for small pitchers. In China, banquets often require an endless “toasting to the entire circle,” during which mischievous heavy drinkers go around tables demanding toasts under the pretext of honor and gratitude. After downing yet another full pitcher, it’s easy to see why there are so many stories of foolish businessmen or overenthusiastic officials fatally succumbing to Maotai poisoning.

Granted, there’s an upside to a spirit’s purity. As Li promised, Maotai “doesn’t cause dizziness, thirst, or a hangover,” which I found to be true, at least this time, and hopefully the next: The company sent everyone back to Beijing with two bottles each “to be enjoyed with [our] fellow countrymen.” The gift was a reminder of our role to play as the company looks to conquer new markets far from China.

Unfortunately, unbeknownst to Chairman Li, a rather tipsy and chatty Huang had let slip during the farewell party that a handsome profit can be made, if one is patient enough to hold on to their Maotai for only a decade or two. A bottle of 10-year-old vintage can fetch 10 to 30 times its original price in China’s luxury market.

This kind of thinking was what lay behind Maotai’s inflated prices right before the crackdown, but our hosts could rest assured that we would not forget to repay our debt. Rather than try to convince my countrymen to drop their mellow Portuguese reds for a fiery baijiu, though, I’ll let them in on the secret of investing in a bottle, as per Huang’s own savvy advice: “Those who buy Maotai never drink it.”

“Fire Down Below” is a story from our issue, “Home Bound”. To read the entire issue, become a subscriber and receive the full magazine. Alternatively, you can purchase the digital version from the iTunes Store. A journey of extremes beneath the world’s tallest mountain