The Great Hoards of China

The Great Hoards of China

Is the country’s clutter chaos a product of its culture?

Then there are the graveyards of discarded shared bikes and piles of rubble left by endless rounds of construction. But it’s inside homes where the clutter really starts to build, from old magazines and boxes that thrifty seniors “rescue” from the recycling heap, to unwanted mooncakes and other leftovers of a wasteful gifting culture.

My grandmother, on the other hand, is an insane hoarder. (She lives with us.) She can’t leave a restaurant without clutching a dirty “clean” napkin in the way out. When I take bags of clothes out to the driveway for donation pick up she will go out and start picking through the bags.”

While it is easy to chalk up clutter to hoarding (which is a psychological disorder), many believe that culture plays a larger role, particularly with relatives who experienced hunger in their youth, or survived the Cultural Revolution.

In his 2009 exhibition Waste Not, artist Song Dong packed two shipping containers with over 10,000 seemingly useless items his mother had hoarded in her Beijing apartment to exhibit in London’s Barbican and New York’s Museum of Modern Art. Quoting a Chinese proverb, 物盡其用 (wùjìnqíyòng, “make exhaustive use of everything”), Song said he believed hoarding was not only “the guideline of my mother’s life, but it is also the portrayal of a whole generation of Chinese people” deeply affected by the scarcities of the 1960s and 70s. 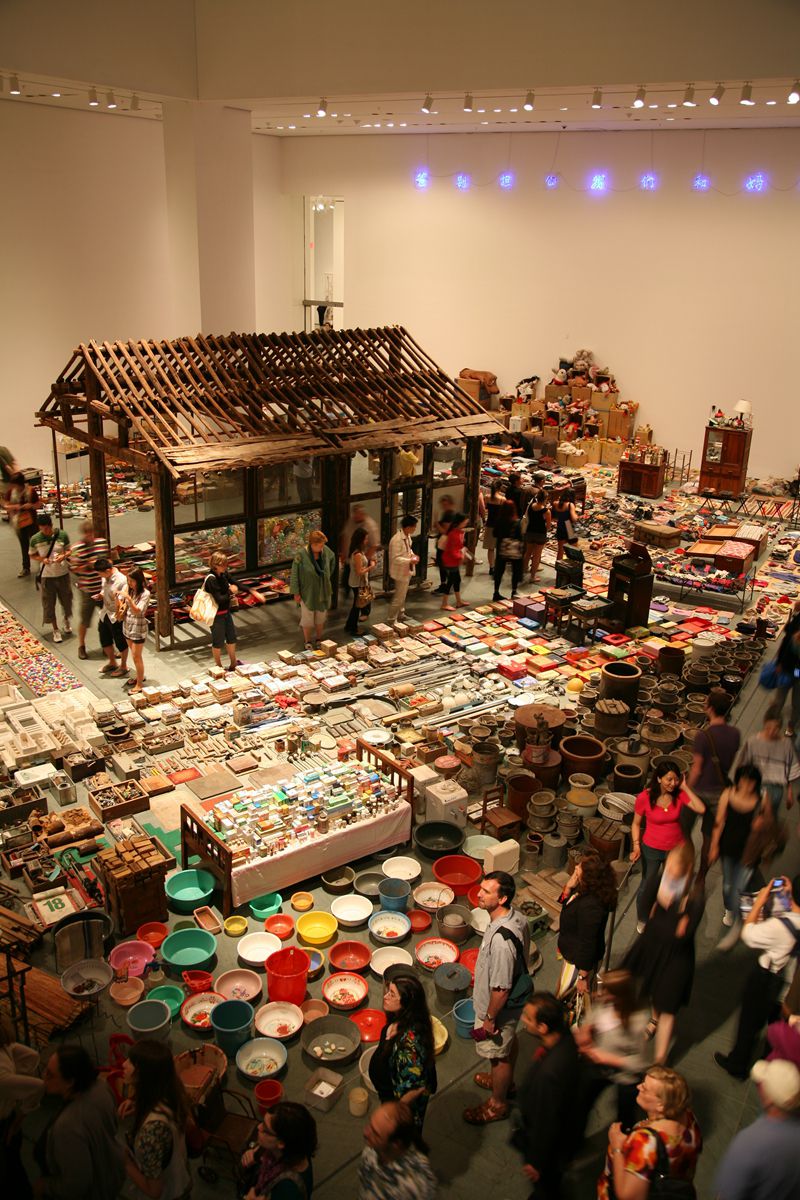 The Cultural Revolution forced families to give up their already few possessions. “People threw away anything considered to represent the ‘Four Olds.’ Since nobody knew precisely what one of the Four Olds might look like and nobody wanted to risk being caught in possession of anything offensive, people just threw away or burned everything they were not sure of,” writes financier Shan Weijian in his recent memoir, Out of the Gobi. The father of “explosion artist” Cai Guoqiang burned his prized book collection, which later inspired his son to create art with fire.

Shanghai-based psychiatrist Zhen Wang, however, argued in a 2016 report that the psychological disorder of hoarding is distinct from “culturally sanctioned thriftiness,” citing a 2015 study that concluded that Chinese and American students had very different motivations to hoard. The former supposedly “thought [items] could be useful one day” and “nothing is supposed to be wasted”—like the 83-year-old man whose garbage collection eventually blocked the entrance to his entire apartment complex—while the latter thought that “stuff could bring visual joy” or “help invoke specific memories.”

A 2017 sustainability study also found that 57 percent of adults in Hong Kong, which was never subject to the Cultural Revolution, are so-called “compulsive hoarders,” supporting the cultural-influence thesis.

Materialism, rather than memories of scarcity, may have become a bigger factor: As income and spending levels increase, and e-commerce offers convenient bargains, the Chinese are purchasing more than ever before. Indeed, professional organizers, taking inspiration from Japan’s Marie Kondo, have begun to offer their services in some cities.

One de-clutterer named Shao Shuai told the South China Morning Post that her middle-class, shopaholic clients “have too many things. When they can’t find them they tend to buy more.” Eventually, “they end up having many things of the same kind. It is very common for food and skincare products to pass their use-by date before they are even unpacked.”