Car crashes, drug bans, and detentions: how Sun Yang remains a hero at home despite a scandal-filled career

Car crashes, drug bans, secret girlfriends, commercial disputes, administrative detentions, changing room bust-ups, smashed blood samples—just some of the many controversies that have marred Sun Yang’s career. But the World and Olympic champion swimmer remains a golden boy at home, fiercely defended on social media and by the press.

Sun, considered by some to be the world’s greatest freestyle swimmer, is a World Record holder who has won three Olympic titles and more than 10 World Championship golds. His success far outweighs that of any other swimmer in Chinese history. Yet his doping record, and other controversies, get as much publicity as his achievements in the pool.

The drug issue resurfaced this week when first longtime rival Mack Horton of Australia, and later British swimmer Duncan Scott, refused to share the podium with Sun after he won two more golds at the World Championships in South Korea. The Australian’s actions are the latest in a long running feud with Sun, whom he famously labeled ”drug cheat” at the 2016 Olympics. (Sun was banned from competition for three months in 2014 for taking a banned substance allegedly for a heart condition—a punishment some considered light.)

In January this year, Sun was involved in an altercation with drugs test officials, which ended when a security guard employed by Sun’s mother smashed blood samples that officials had taken from Sun at his home. Though it was later reported that the testing officials did not produce the right credentials, nor followed procedure, Sun and his team’s actions were taken as evidence of a guilty conscience. 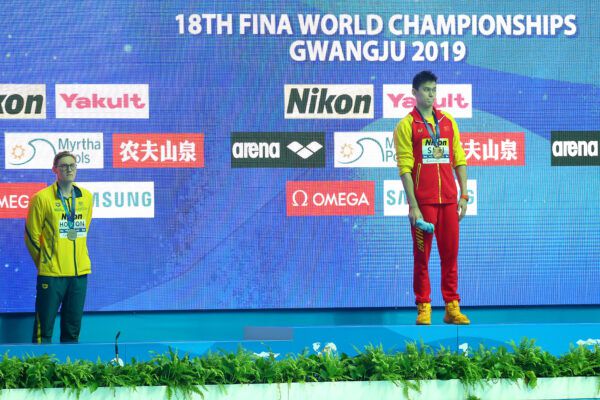 Yet Sun remains the darling of much of the Chinese public, who take accusations against him as signs of a Western media witch-hunt against China itself—an idea that Sun himself promotes. “Around the world when China has good results people always think something bad…there are doping cases in other countries, too,” he said in 2015.

The swimmer’s continued popularity is surprising, given that he has been accused of many of the same misdeeds that permanently damaged the standings of other Chinese sport stars. Like China’s Olympic hurdling champion Liu Xiang and diving champion Tian Liang, Sun has been accused of spending too much time on commercial activities and appearing in reality shows like Running Man, Takes A Real Man, and King Cross.

In 2013, Sun admitted to having a secret relationship with a flight attendant, which was flagged as causing him to miss training. In the same year, he was involved in a traffic accident while driving without a license, and subsequently spent seven days in detention. At the 2015 World Championships, he was accused of assaulting a fellow swimmer during warm-up, and had a meltdown in the locker room. And at the Asian Games in 2018, Sun drew criticism for wearing self-branded clothing, rather than those of Anta, the official sponsor of the Chinese team.

But while other heroes—like basketball player Yi Jianlian, who was banned for removing the CBA’s mandatory Li Ning sneakers mid-game in 2016—took time to bounce back from such incidents, if at all, Sun’s reputation has been remarkably resilient. This is due in no small part to the patriotic image he has cultivated, which appeals to nationalistic newspapers and netizens alike. At a medal ceremony of the aforementioned Asian Games last year, when a malfunction meant the flags fell, Sun insisted that the Chinese national anthem be played again and the flag re-raised. “Sun’s patriotism then won over more hearts,” gushed China Daily in an article that made no mention of Sun’s previous drugs mishaps.

In the most recent controversy, Chinese media have called Horton a “sore loser,” and accused him of disrespecting China, echoing Sun’s own patriotic response to Horton’s snub at the post-race press conference: “You don’t have to respect me, but you must respect China.” (Sun responded to Scott’s snub yesterday by calling him a “loser.”) Back in 2016, in the wake of Sun and Horton’s earlier spat, the Global Times published a number of articles on Australia’s supposed cultural backwardness and its conduct in the South China Sea. Given the diplomatic context that Sun has embedded himself in, it seems that 大白杨 (“Big White Yang”), as Sun is nicknamed, has become too big to fail.

Yet even the most invincible-seeming Chinese stars can quickly fall from grace (just ask Fan Bingbing). Some remain skeptical of Sun’s achievements: “Those who use drugs to win don’t deserve respect,” one Weibo comment reads. Others take issue with Sun’s propensity to bring his country into his personal quarrels. “After [retiring], Sun Yang will no doubt make a lot of money doing ‘patriotic business,'” another jeers.

In September, Sun will face an international tribunal to decide whether he should face punishment for the smashed blood samples. If proved of wrongdoing, his career could be over—regardless of his reputation in China.