You may be stuck behind the firewall, but that doesn’t mean you can’t enjoy it. Walled-Off is a new series explaining how to navigate—and take advantage of—the domestic web without the use of certain “special software.”

Most, if not all, China-based music services adopts the freemium model. In addition to streaming music recorded by various artists, they offer radio, music video, and even KTV streaming options for free. The premium option typically allows users to skip ads and access premium music, better audio quality, custom themes, and concert ticket discounts. Though not all of these services offer English interfaces, their features are intuitive and similar to overseas streaming platforms.

Established in 2004, Kugou is the largest music streaming service in the world. It achieved this title by catering its selections to a wide audience, especially those in lower-tier cities in China, so don’t be surprised if you’re offered a square-dance playlist in the homepage. In 2014, Kugou was acquired by the China Music Corporation, which was later purchased by Tencent, making it part of the Tencent Music Entertainment Group.

Kugou’s distinctive feature is their simple interface. The music library is categorized not by genre, languages, or year, but according to popularity. 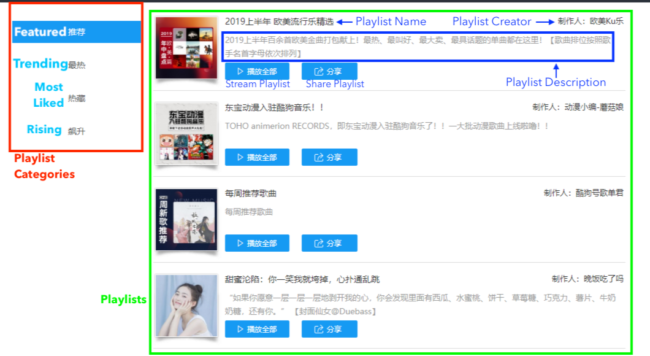 Kugou’s search function only displays 30 results maximum, and users are asked to download the app if they want to see more. There’s no option to add music to queue without having to pause what you’re currently listening to, nor a separate column listing search results by artist: Users can only search by artist by clicking on their name in the music player screen. 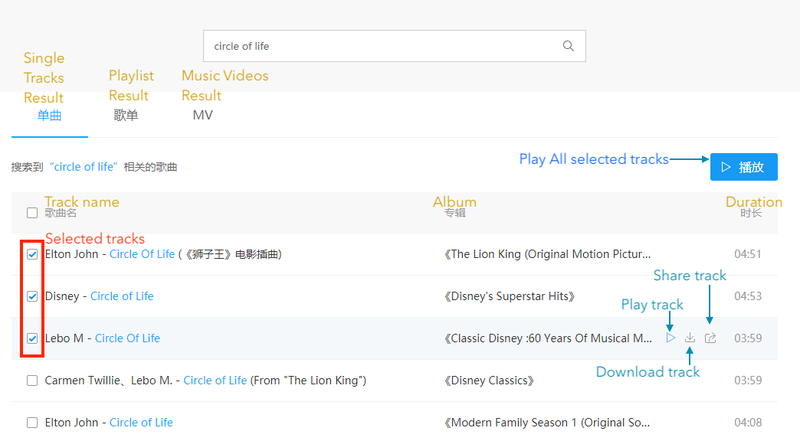 One of Tencent’s earlier products, QQ Music was founded in 2005, and caters to a younger, urban audience with mainstream pop hits. QQ Music’s popularity is supported by its integration with other Tencent product—WeChat’s music search and music identification features (like Shazam and SoundHound) and QQ Messenger built-in music feature are both powered by QQ Music. QQ Music also has an overseas version, JOOX, which is currently only available in Hong Kong, Macau, Thailand, Indonesia, Malaysia, Myanmar, and South Africa.

QQ Music has rich functions compared to other platforms, with a music database organized by title and description of artists, albums, and tracks. For Chinese users (or Chinese language-learners), QQ Music provides a translation toggle of the lyrics to non-Chinese songs. However, it’s very persistent in reminding the users to download their app via sidebars and pop-up reminders, and limit non-app users’ search to 10 results.

Music tagged with the word 独家 (“exclusive”) indicates that QQ Music has signed a deal with the record label and the track is only available to paying users. Free user can click the small arrow on the side to see if the same track is available from a different album.

NetEase Music, also known as NetEase Cloud, was launched in 2013 and gained 300 million users within four years. The service’s focus on indie artists and social features, which enable users to interact with the artist, gives NetEase a competitive edge over other giants in the field. NetEase Music received investment from Baidu in 2018, and its content is now integrated with Baidu’s DuerOS for tablets and smartphones.

NetEase promotes indie musicians by providing a selection of music from newcomers and a button to apply to become NetEase Music artist. (Here’s a guide for applying in English.) 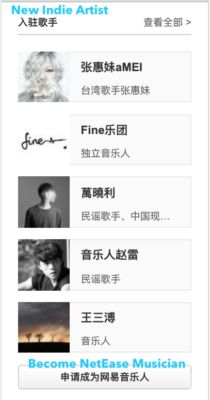 Unlike QQ, NetEase does not list featured or recommended music in the search bar, although it offers suggested searches when user starts typing queries.

NetEase doesn’t include a column header in the list of results and assumes that users know the difference between track, artists, and album name. Another major inconvenience is that there is no button to play all tracks, nor option to select multiple tracks at once in the search result page.

Not to be confused with Kugou, KuWo was started in 2005, and offers a few unique genres such as DJ mixes and children’s songs. It also provides lossless music for free. The company was also acquired by the China Music Corporation and now operates independently under the Tencent Music Entertainment Group.

The 无损 tag after the track name indicates a lossless quality file, which is only available to play through KuWo’s app.

However, KuWo users are not able to choose multiple tracks to play, and the leaderboard listing lacks international charts such as the American Billboard Chart, the Official UK Top 40, Korea’s Mnet Chart, or Japan’s Oricon Chart. Instead, Kuwo tries to promote several listings of its own. 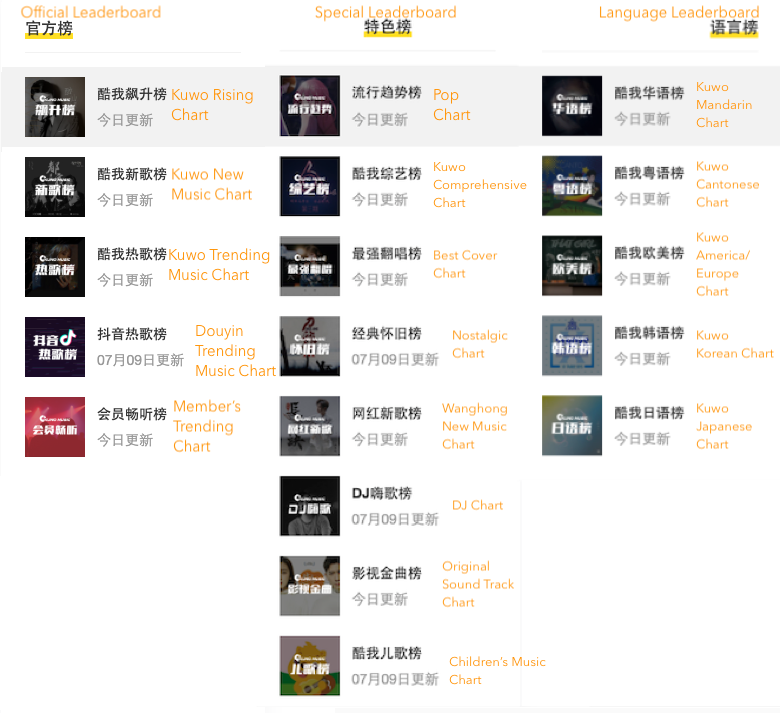 Founded in 2006, Xiami started off as P2P music-sharing platform, but changed its business model due to copyright issues. Xiami was acquired by Alibaba in 2013 and merged with its music service, Alibaba Planet, in 2015. Xiami focuses more on tech-savvy and genre-specific users, donning some AI powered features like their radio and AI music composer, which will play tracks based on user’s preferences and previous actions.

The drawback in Xiami’s algorithm is that it sometimes anticipates too much: For example, clicking the Play button will queue other tracks in addition to the one selected. To only play selected track, user have to go the extra step of click the “More” button and add the track to queue, and make sure there are no previous track in the queue. Nevertheless, Xiami’s desktop player stands out for its flexibility, offering options to switch between bottom-bar and full-page display style, and light/dark mode toggle for the full-page display. Walled-Off: Mail Behind the Wall