“What makes an ideal landscape?” the late artist Chen Shaoxiong asks a toddler, who slumps away from the camera’s gaze. “Is it trees? Houses? Cars?”

“McDonalds!” the toddler blurts, after a beat.

The conversation takes place in Chen’s “Landscape – 1,” a series of interviews filmed in 1995 and on display at Society Guidance (Renjian Zhinan), a two-part exhibition at the UCCA Center for Contemporary Art. Taking its title from a fictional periodical in the 1990s sitcom Stories from the Editorial Board (Bianjibu de Gushi), the exhibition seeks to take a varied—if not comprehensive—dive into the decade’s art.

The first installment of Society Guidance traces the social and ideological evolution of Chinese society in the 1980s and early 90s, featuring pieces of Beijing’s former city wall repainted as US dollars by sculptor Wang Jin, and provocative performances by Liaoning-born artist Ren Jian and the artist-intellectual collective New History Group. In the exhibition hall is Chen’s film, shot just three years after an inflatable Ronald McDonald billowed over Beijing’s Wangfujing shopping district on the opening day of the largest McDonalds in the world, attracting 40,000 people to stand in line for a taste of a hamburger.

The golden arches heralded a decade of rapid modernization and globalization—and artists, awash in the chaos and contradictions, sought to give expression to their times. In 1993, the Wangfujing McDonalds was the planned venue for Ren and the New History Group to stage a series of rock music, fashion and painting shows, fittingly titled “Mass Consumption” (the event was halted by the authorities before it began). 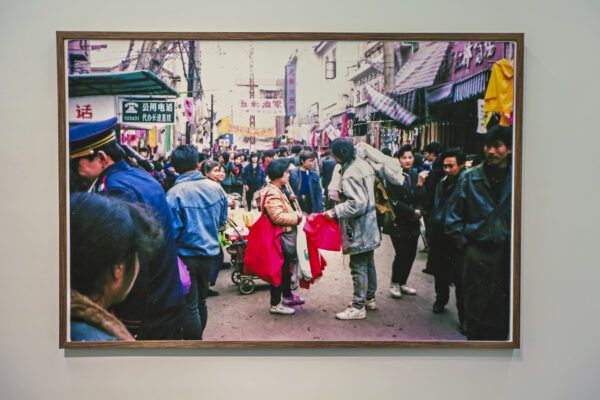 Ren Jian, Up to the Streets and Down to the Factories, 1992

The second installment, which opens on August 31 and runs until November 24, will display artists at the end of the decade (Chen Zhen, Huang Jingyuan, Li Juchuan, Doubly Fly Art Center, Shi Yong, Xing Danwen, Xu Tan, Xu Yong, and the Wildlife Art Project) who seized upon the rise of the internet to communicate themes of urbanization, identity, and feminism.

The Society Guidance series rigorously regards a task oft-overlooked in the art world: context. Half the exhibition space is dedicated to a reading room, where visitors can peruse browned yet carefully preserved newspapers and periodicals chronicling global events and critics’ responses to the artworks in their original time period. Shelves full of dog-eared books offer a glimpse into what artists read as they grew up, such as Walking Toward the Future, a collection of 74 pamphlets by preeminent social thinkers compiled by Sichuan People’s Publishing House between 1984 and 1988 .

With artwork and era exhibited side-by-side, larger questions arise: How did artists in the 90s understand their historical moment? The New History Group saw the past as “this chaotic fragmentation, all this dust and refuse of the end of the twentieth century, this fin de siècle for perhaps all humanity,” goes a well-known 1992 quote from Ren Jian on the wall of the reading room. The artists’ task became “picking up the pieces, classifying and archiving, and placing each thing in its proper place. Through these, we search for mechanisms of regeneration,” according to Ren. 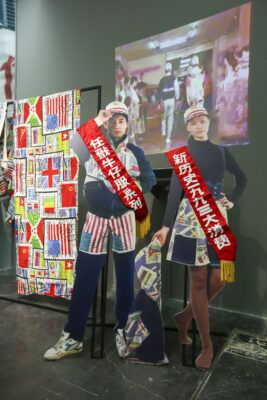 One stab at sorting and explaining the dizzying sweep of change in the artists’ lifetime was a 1993 rock cassette by the New History Group, of which 3,000 copies were recorded. In the song “China 1993,” Tang Zhixiong sang: “In 1966, we studied Lei Feng’s good example… / In 1978, we all took the TOEFL in hopes to see the mysterious world outside… / In 1992, the stock market rose and rose, a strange world we don’t understand… / The tide is here, we’ve gone down to sea, a generation, a generation, a generation.”

Beyond artwork, Society Guidance presents a fresh interrogation of the dialogue between artists and history. Looking back at the 1990s, myriad narratives abound, from rising economic prosperity to the globalization of culture, to the loss of traditional values, and consumerism as a placeholder for meaning. “I believe that humans have three eyes,” the exhibition quotes Chen. “When we use two eyes to see things in the external world, the third eye silently appraises our way of seeing…At times like this, all images are disordered, memory is a shambles, and we lose our ability to judge good and bad.”

Three decades later, as the dust of history perhaps begins to settle, curator Bian Ka at the UCCA has begun the ambitious task of sketching a rough portrait of the decade through the group re-exhibition of artists from the era. The project is, like Chen’s artwork, about “ways of seeing”—reframing and reinterpreting—artwork within a rich social and historical dialogue, both mirror to and actor in the times, prisms through which visionaries of the past can be cast into the future. 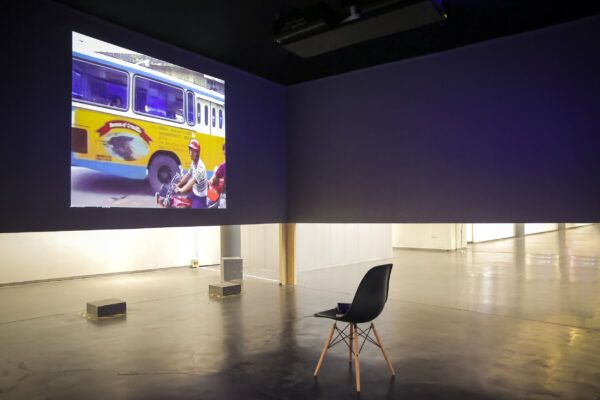 Sit inside a van with a fabric body