History of an iconic brew—excerpted from our book “Shandong: Rivers Deep, Mountain High”

Tsingtao (pronounced exactly like “Qingdao”) is China’s oldest beer, and certainly among the biggest-selling in what has become the world’s largest beer market, with more than double the sales of the amber liquid than the US. Now facing fresh competitors and constantly maturing tastes, Tsingtao’s status as “China’s favorite beer” is constantly undergoing challenges. But one thing no one can take away is the history and legacy of this iconic brand.

Tsingtao beer was born amid Germany’s brief attempt, between 1898 and 1914, at establishing a Bavarian colony in what’s now the port city Qingdao. The homesick drinkers established the Germania-Brauerei brewery in 1903, and, by the following year, were pulling pints of pilsner made with Laoshan spring water from the famous Laoshan Mountain, one of the birthplaces of Daoism.

Within a couple of years, Tsingtao had won a gold medal at the Munich Beer Expo. Unfortunately, the hangover kicked in shortly after: A series of wars and political upheavals saw the Germans retreat, and the brewery passed through a series of hands, beginning with the Japanese (as Asahi) in 1916: Qilu Enterprise under the Kuomingtang government took brief tenure after the Japanese defeat in 1945, and in 1949, the new government took over and the brewery became state-owned. In 1963, the brewery’s famous “1,800 steps” procedure was recognized as the national standard for the quality, taste, and safety of all Chinese beer—something the German purists would certainly appreciate! Nowadays, Tsingtao has adapted the manufacturing processes at some of its 60 locations to produce an ale, a wheat beer, and an alcoholic mixer in addition to the standard lager. 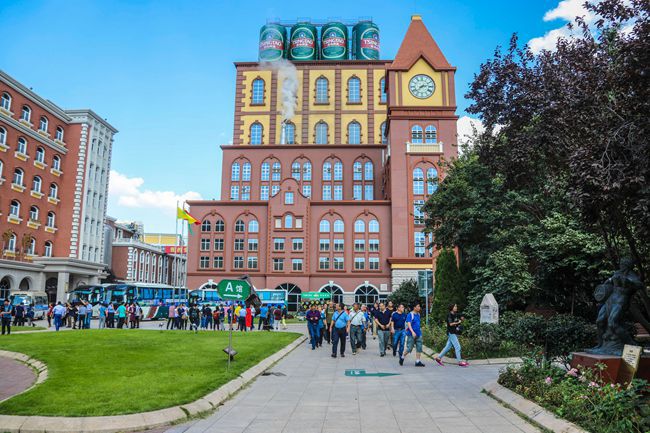 Today, you’ll find the ubiquitous green bottle in practically every location that sells beer, from restaurants to supermarkets and street stalls. You might even see some Qingdao locals drinking the brew, through a straw, from a branded plastic bag. The flavor is a light brew with an ephemeral head and aftertaste that’s softened and rounded by the rice. Tsingtao is a beer for all seasons, but also a pilsner that pairs best with a hot day or a spicy meal, neither of which you will have any problem finding in China.

If there’s one place you’re guaranteed to glimpse the famous local penchant for selling or swigging beer from a bag, it’s at Qingdao’s annual beer festival, which usually runs for about a month from the end of July through August (dates vary) every year.

The sites also sometimes vary, though a recent favorite is the Golden Beach Beer City at Huangdao, a venue that cannot be missed: You’ll see the huge neon sign exhorting visitors to “Ganbei (drink up) with the world!” from afar. Inside, you’ll also see people drinking beer from horns, hats, bongs, and barrels—even plastic bags. And, seeing as it’s billed as a beer festival, the beverage in question doesn’t always have to be Tsingtao. It might be Yanjing. Or Snow. Or Harbin. But given that Tsingtao is the main sponsor, theirs is the most prominent beer, particularly in the beer halls.

It’s those boisterous beer halls (actually tents) that give the festival’s nickname, “China’s Oktoberfest,” some ring of truth. Dirndls; wassailing competitions; pounding techno; young men stripped to their waist, standing on tables, yelling; middle-aged men lying on the ground, apparently sleeping; an ocean of frothing liquid that almost rivals the surf outside. These are all standard sights every day at the festival.