Though China has spent millions on hosting international competitions, beauty pageants have yet to take off domestically

When Zhu Xin was named runner-up of this year’s Miss China Universe in Shenzhen in January, it was a bittersweet moment: At 25, she had reached the upper age limit to compete. For her parents, who’d traveled a long way from a drab northern city to see the pageant, this would be the last chance to see their daughter’s shot at the national crown.

Suddenly, commotion broke out. There’d been a mix-up—Zhu Xin was the winner after all, a harassed staffer rushed onstage to announce. Fazed by the applause (as well as her mother, who was jumping in jubilation from the first row), Zhu’s initial reaction was dread. “I knew I should be happy and crying, and hugging everyone,” she later told TWOC, “but I immediately felt the pressure of having to compete in the international finals.”

Though China has competed in the Miss Universe pageant since 2002, the nation’s contestants have yet to bring home the crown. This is perhaps not surprising, given the short history of pageantry in China: Miss Universe was founded in 1952, a time when the idea of pageants was politically taboo. At China’s first officially recognized beauty contest, the 1985 “Goat City Youth Pageant” (so called for host city Guangzhou’s nickname), contestants were expected to answer questions on chemistry, history, and the political economy, rather than parade around in swimsuits. Pageant-training schools have yet to take off in China

Fast forward more than three decades, and there are now between 100 and 300 locally organized pageants a year. Moreover, since 2003, nine finals of the internationally-famous Miss World pageant, have been hosted in China, mostly in tropical Sanya on Hainan island (which has reportedly spent millions on licensing and infrastructure for the event). Yet China has yet to secure the respect it craves on the international beauty circuit.

In part, this is a legacy of chaotic economic development: “China’s burgeoning pageant industry is a mess,” observed the state-affiliated Global Times in 2014, detailing a web of lawsuits, irregularities, corruption, and sex scandals that the industry was mired in. Cosmetics mogul Yue-sai Kan, Miss Universe’s China organizer, remembers feeling skeptical when she was originally approached to be China’s license holder in 2011, since there were already many unlicensed organizers using the Miss Universe brand at the time. “There were so many people fighting, all claiming to be the rightful holder for the pageant in China,” she tells TWOC.

Among other things, the unruly supervision and string of sordid allegations have bred an atmosphere of distrust with the media. Provincial pageants routinely deny access to media not affiliated with their sponsors—one organizer demanded TWOC pay 100,000 RMB for a press pass, while another, which had two government officials and a former military general on its judging panel, claimed that “regulations” forbade journalists from attending.

But international pageants are also not immune from media faux pas: One international reporter for the relatively innocuous Women’s Wear Daily happened to snag a coveted press pass for the 2012 Miss World finals in Ordos, only to be chased off by plain-clothed police after just 48 hours in the Inner Mongolia city, allegedly for asking about the local real estate bubble. When Yu Wenxia went on to become China’s second-ever Miss World winner at that competition, international media, most of which weren’t in attendance, joined users on social media denouncing her “fake” and “political” win.

Although some smaller pageants still have insalubrious reputations, Zhu claims that they gave her the opportunity to hone her craft and made her competitive for the Miss Universe China crown. “I didn’t have many resources to improve on my own,” notes Zhu. “So, I just kept signing up for pageant after pageant; improving a little bit with each one.”

Whereas serial pageant participation in the West can mount up large expenses for participants, the cost is subsidized for many Chinese pageants, both small and large, by corporate sponsors who provide clothing, shoes, and accessories. While this often results in most contestants looking alike, Kan claims that this sponsorship system benefits less-privileged contestants. “Not every girl who is chosen in the preliminary pageants has the fashion know-how or is well-off enough to get all of her own clothes to compete well in the China final,” she explains. 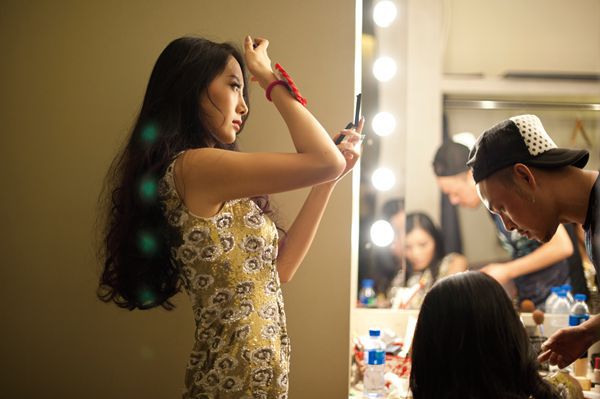 Many contestants rely on sponsors for clothes and accessories

Kan herself provides a free boot camp for all winners of the preliminaries to prepare them for the Miss Universe China finals—the 2014 camp was filmed as a bilingual, 13-episode reality show on streaming platform iQiyi.

While the camp used to take months, training is now packed into two weeks, covering the ins-and-outs of walking and talking onstage, as well as mental preparedness. “My first year, the girls were really about to kill each other; they were so jealous,” reminisces Kan. “So, that second year, I hired a psychiatrist to work with them during training.” She believes that teaching women to view pageants as a self-improvement platform, rather than just a competition, is part of building a “formerly nonexistent pageant culture” in China.

Unlike many of her international counterparts, Zhu did not grow up competing in regional pageants. In 2017, she graduated with a degree in stage arts from the Central Academy of Drama in Beijing, focusing on make-up, hair, and costume design. Craving a chance to be in the spotlight herself, however, she signed up for that year’s Miss World preliminaries after seeing an online advertisement.

She now dreams of becoming an actress, model, and owner of her own pageant school—a resource she believes Chinese beauty queens sorely need to be competitive internationally. “Experience is the key,” says Zhu, noting that some pageant schools in Latin America and the Philippines start teaching stage presence, pageant catwalking, and how to respond to interview questions to young girls, well before they are eligible for Miss Universe or Miss World.

Kan believes that Chinese contestants would benefit from increased internationalization, especially when it comes to the English-language interview questions, which often require political awareness. “If you get a Chinese girl up on stage and ask her opinions about the #MeToo movement, she might not have a clue what it is,” she admits.

Mao Peirui, Miss China World 2018, thinks that she was chosen to represent China because of her foreign language ability and Columbia University degree, rather than just her pretty face. “I think the organizers wanted me to make the Top 5,” she says. However, the different beauty standards between the East and West proved to be an unexpected stumbling block. “Once I got to the Miss World finals, people kept telling me, ‘You’re too thin. You need to gain some weight.’”

By contrast, Zhu believes that she was selected for the Miss Universe finals because her features appeal to a Western aesthetic. “I am not a beauty in Chinese eyes,” she comments. “I have a square face. I have dark skin. I am not so slim. I have curves and hips. I have muscle tone.” In order to compete in the international finals, though, Zhu had to embrace this look—spending hours working out, getting invisible braces for her teeth, dyeing her naturally-dark-brown hair into black—and plans to break China’s biggest beauty taboo of all: getting a spray tan.

Another major roadblock for China’s international pageant ambitions is its strict media regulations. While fellow beauty queens live-streamed backstage at last year’s Miss World finals, asking for votes on sites like Instagram, Facebook, or MobStar, Mao was unable to join in because those platforms are blocked in China. “Having an active fanbase on social media who will vote for you might make the difference between coming first and coming second,” she says. 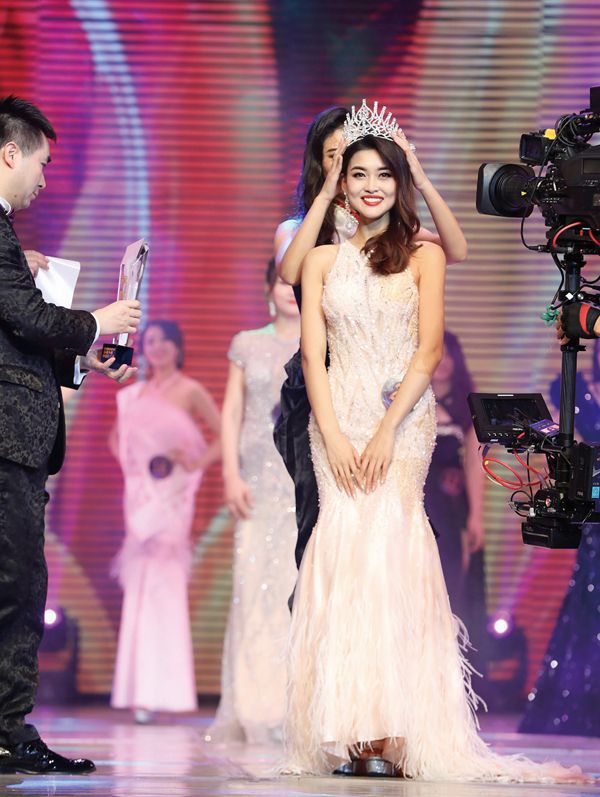 Restrictions on live broadcasting also make hosting the Miss Universe competition an impossibility in China, according to Kan: “If we host Miss Universe, we should host it right. And we can’t do that yet.”

Yet as Mao notes, big wins for the country don’t necessarily translate for the contestants. “Sometimes, it feels like Miss World never happened at all,” she laughs. After making the Top 30 at the finals, the license holder never assigned her additional modeling work, appearances, or even community service, forcing her to organize those opportunities for herself.

Kan seems to agree: “If we are going to have a successful beauty queen in China, having a beautiful face and beautiful body is not enough,” she says, noting that a contestant must also have personality traits associated with Western culture, such as “a level of aggression in putting herself in front of the judges and openness to the world.” To achieve this, Miss Universe China has started a new social media recruitment campaign in English for next year’s competition, reaching out to Chinese women currently studying and working abroad.

In the meantime, Zhu is preparing every day for the Miss Universe finals—watching English-language news to get a better understanding of current affairs (she asked TWOC to correct her pronunciation of English words), and combing through fashion magazines for inspiration on the “national costume” modeling segment of the competition. Despite her initial trepidation, she’s now looking forward to the international spotlight. “If you do modeling, you are just there to show off the clothes. But if you do pageants,” says Zhu, flashing a winning smile, “for a moment, you are the queen of the stage.”

Face Value is a story from our issue, “Funny Business.” To read the entire issue, become a subscriber and receive the full magazine. Alternatively, you can purchase the digital version from the App Store.