This review may contain spoilers for the book.

In Wang Shou’s The Debt Collector, businessman Chen Sheng decides to take justice into his own hands when one of his customers reneges on a 300,000 RMB debt. With his former employee Zhang Guoliang doing the dirty work, Chen’s elaborate plan quickly goes off-kilter—with lethal results.

Although most of the plot centers around Chen’s break-in at his customer’s villa, taking hostage of the entire family, the 129-page Penguin Zhejiang Special (published last month through a special partnership with the Zhejiang Writers Association) focuses on the nuances of the urban-rural divide and the realities of its diverse cast of characters—rather than nail-biting twists a la He Jiahong, standard to the Chinese crime fiction genre. 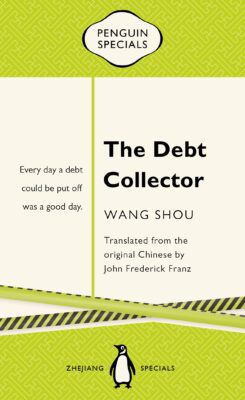 At first, Chen seems like the wronged hero; only slowly does the reader realize his perverted plan, which both shields himself from judicial retribution, and sets up Zhang Guoliang to take the fall as a quintessential disgruntled migrant worker turned haywire (with explosives strapped to his chest). However, when Zhang is shot in the head by special unit forces, Chen cannot shake the feeling that he is morally indebted to Zhang’s ultimate sacrifice. The ending shows Chen deserting his own family and business for the self-induced penance of taking care of Zhang’s elderly father in Jiangxi province.

This epilogue may be unfulfilling to the reader seeking some sort of dramatic resolution; the final sentence even ends with an ellipsis. The book also goes on a couple of tangents that do not advance the narrative, including descriptions of Chen’s journey through rural Jiangxi to find Zhang and other murders which the local police force had vindicated (masterminded by a legendary Ah Si, who quickly disappears from the story). These stories provide the reader with insights into realities faced by different socio-economic groups in China. However, they seem slightly misplaced in a novella centered on a hostage-taking stand-off with the police.

As fantastical as the plot may seem, the topic is timely and is reminiscent of many recent headlines associated with peer-to-peer (P2P) and informal lending institutions. One example is the case of 21-year-old Yu Huan: After 11 debt collectors showed up at his family’s shop in 2016, Yu went on a stabbing spree, killing one of them. His sentence was reduced from life to only five years following widespread public outrage and support of Yu’s filial piety, when it was reported that the deceased lender had yelled insults and exposed his genitals to Yu’s elderly mother.

“The Debt Collector” is likely to make a good addition for the bookshelves of those who are already fans of Wang Shou, who has been lauded as the “Jack Kerouac of China” and is known focusing on the confused morals of the generation following the Cultural Revolution— of which Chen Sheng is certainly a model example. While the book exposes the rifts in modern Chinese society, one voice feels missing—that of the disadvantaged and exploited Zhang Guoliang, whose motivations and desires seem flat, yet determine the entire course of the narrative.