The fight to stem hate speech and online abuse in China

“Katie” was hoping to share a moment of happiness when she posted a video of her dancing with her American husband on the video-sharing app Douyin last year.

Instead, the 28-year-old from Hebei, who asked to go by a pseudonym, received nothing but vitriol: “They said things like ‘easy girl’ and ‘she’s with a foreigner only because his d-ck is big,’” she recalls. “They said, ‘You are betraying the country.’”

Fearing more bigoted comments, Katie deleted her video after a few hours, and used Douyin’s complaint function to report one of the offending accounts. A reply came quickly from the platform: They’d stopped the user from commenting on all videos on Douyin for just under a month. “It’s not enough to make me feel better, but at least it’s something.” A lifetime ban would have been more appropriate, Katie argues.

China’s internet may be one of the most strictly regulated in the world, but online abuse is still a serious problem. A study by the Chinese Academy of Social Sciences conducted last year found that 30 percent of young people in China had experienced cyberbullying, known as wangluo baoli (网络暴力) or wangbao (网暴) for short.

In another survey of 1,500 high school students, conducted by Zhou Zongkui, a professor of psychology at the Central China Normal University, 57 percent said they had been affected by abusive comments. Government policies, like real-name registration for social media users, seem to have had limited impact in stemming the violence.

For victims, it’s sometimes difficult to know where to turn. Online abuse continues to exist in a legal gray area in China, as it does in many other countries. Under Chinese law, posting “obscene” material online can lead to a fine or criminal detention, but what constitutes “obscene” is not clearly defined; there are no specific laws criminalizing cyberbullying. 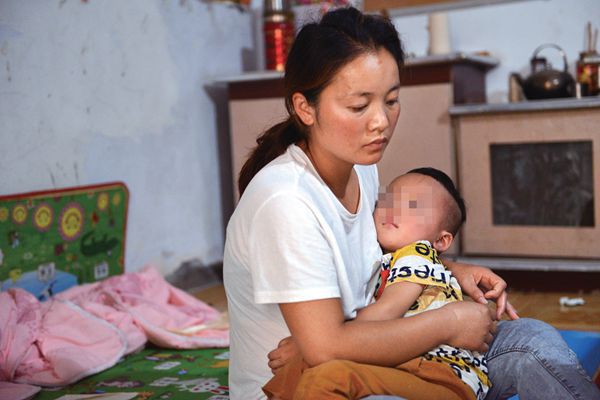 This uncertainty means that punishment for perpetrators is sporadic at best. In July, a 27-year-old man in Shenzhen was held for 10 days for “disturbing social order” by threatening to kidnap a child on shopping app Xianyu. The child’s mother, identified as “Jia,” had posted photos of the girl modelling clothes for sale. “Harassing an underage girl, making rape, killing, dismembering, and kidnapping threats, but only 10 days in detention?” Jia questioned on Weibo.

In April, 26-year-old Wang Jingjing from Zhejiang province opened up about her eight-year battle with cyberbullies on the TV show Talking with Strangers. The harassment started on Wang’s high school’s online bulletin board when she was 16, forcing her to postpone her studies, and continued into university. Friendless and deeply depressed, Wang attempted suicide on multiple occasions. This year, she finally won a lawsuit against the original school webpage’s moderator—but he was given just three months’ detention.

In 2014, a man from Liaoning was detained for eight days for sending death threats to a Beijing television host. In August 2019, a WeChat user called Pi was ordered by a court in Chongqing to pay 1,000 RMB in compensation and apologize for calling another user, named Liu, a “homewrecker,” and sharing photos of Liu without permission—the court argued that Liu’s reputation and privacy had been infringed.

Katie hesitates to call her experience criminal. “They’re morally wrong, but I think from the perspective of the law they haven’t done anything illegal.” As long as the issue remains legally ambiguous, cases of offline punishment for perpetrators—beyond, say, preventing them from posting for a period, or temporarily closing their accounts—are likely to remain the exception rather than the rule.

Even when the law appears clear, enforcement is patchy. The so-called “human flesh search engine” (人肉搜索), in which the personal information of perceived wrongdoers is crowdsourced and posted online by an “internet mob” (网络暴民), has been illegal since 2017, but is still practiced regularly.

Incidents of what some call “doxing with Chinese characteristics” persist in increasingly abusive ways: When a young woman’s personal details were shared, along with offensive comments, after her Ethiopian Airlines flight crashed in 2018 and killed all on board, Weibo urged users to “respect the deceased and discuss rationally,” though it’s not clear if any criminal charges were brought. 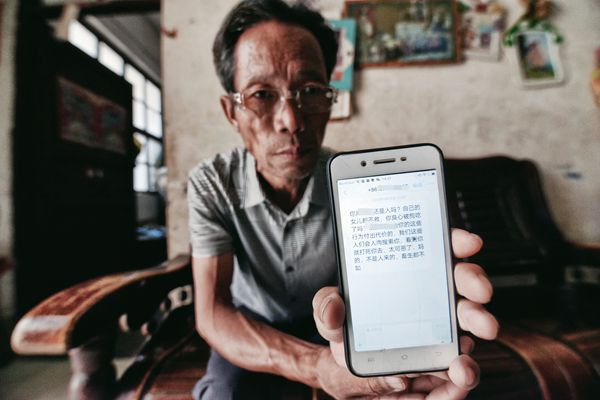 Muddying matters further, authorities have actively encouraged netizens’ use of the flesh searches in other instances to help police track down criminals: In June this year, police in Sichuan province asked internet users to help identify the location of an assault captured on CCTV cameras in the city of Dalian. The location and suspect were quickly found, illustrating the effectiveness, on and offline, of the “internet mob.”

Occasional government crackdowns and pleas for respect from Weibo aside, the lax legal environment online has meant that, far from being stamped out, trolling has even emerged as a professional service, with individuals offering to “scold by proxy” one’s internet adversaries for a fee. In 2016, Taobao removed listings for these services, known as daima (代骂), for “breaking moral codes,” but they can still be found in the e-commerce app, as well as QQ and WeChat groups.

Some cyberbullying also appears to have been directed by organized groups to protect their collective interests. In June, a passenger on a China Southern Airlines flight took to Weibo to complain about a lack of blankets available onboard, inviting trolls to attack what they saw as her sense of entitlement. It emerged that some comments, including death threats, came from flight attendants who had shared the passenger’s post in a WeChat group for aviation workers, and decided on coordinated retaliation.

In the absence of adequate law enforcement, there are few other places for victims to turn. In Hong Kong, where cyberbullying has received more study than on the Chinese mainland, research suggests that online abuse has contributed to rising rates of depression and suicide among the young.

Chan Ko-Ling, a social sciences professor at Hong Kong Polytechnic University, argues that many victims of online abuse feel at a loss. “A lot of perpetrators of doxing behavior actually have previous victimization experience. They cannot seek any help from the police or even the service provider…[they think that] ‘if no one can help me, then I will take revenge myself,’” he says. “It’s becoming a vicious cycle.” 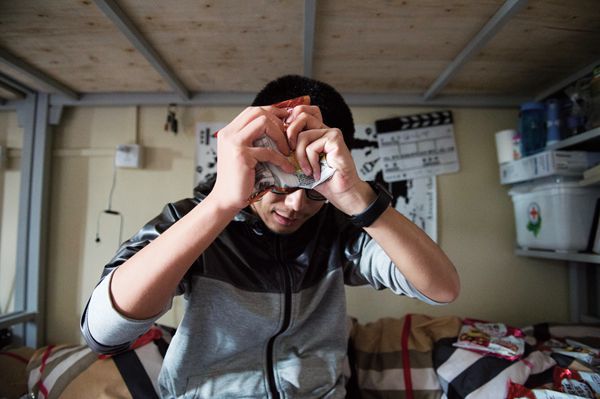 The Tree Hollow Rescue Movement, an organization set up by Huang Zhisheng, a professor of artificial intelligence at the Vrije Universiteit Amsterdam, uses AI technology to search Weibo’s “tree hollows” (shudong, Weibo accounts on which users post their own gloomy thoughts in the comments) for posts that indicate a high risk of suicide.

Volunteers then reach out to those contemplating taking their own lives in the hope of talking them round. But they are an exclusively volunteer group, as well as one of the few independent organizations that work on online issues, and do not specialize in cyberbullying. No equivalent seems to exist for victims of online harassment.

Much of the burden, therefore, falls on the platforms themselves, and companies around the world are grappling with similar issues. In the US, the responsibility for policing content has fallen on the service providers. Some of the rules and methods that Facebook uses to assess posts were made public in 2018 via a 25-page document of “takedown rules,” and the platform says it employs 7,500 content reviewers who deleted 30,000 pieces of hate speech every day between July and September 2018.

However, there is little to no information available on how apps like WeChat police their content (though Weibo has empowered over 3,000 verified accounts of government departments and “media to directly refute rumors” by marking posts as “unreliable”).

Fighting the trolls may require more than legislation and better monitoring online. Lan Fang, a reporter-turned-entrepreneur, opened an education company, C Plan, in 2016, and frequently writes and gives lectures on online harassment. She believes improving China’s online environment starts with education. “When I talk to children, sometimes they’ll say some things that shock me. They tell me that their teachers said these things: ‘Japanese people should all die, Americans…are all our enemies,’” she tells TWOC.

Lan laments this type of nationalist stereotyping, which she says is part of a systemic failing to teach tolerance of different people and opinions at school. According to Lan, a sense of superiority, leading to hate speech, is one of three drivers of cyberbullying, along with a sense of self-righteousness and viewing disagreement as a form of personal attack.

At C Plan, children attend courses aimed at improving their ability to think critically, avoid stereotyping, and suppress emotional responses that lead to inflammatory or abusive language online. In one activity, designed to help break down prejudices, children are shown an image of a boy and a girl, and asked to label them according to criteria like which would be better at math or prefer the color pink. They are then taught that reliable data is more important than impressions based only on personal experience or gut reactions.

Lan points to online groups and other organizations in the West as some ways in which dignified debate can be encouraged (though there is little to suggest that online debate in other countries is any less abusive than in China). In Sweden, a volunteer group organizes under the hashtag #IAmHere, and searches Facebook pages to identify instances of hate speech and inject facts and well-reasoned viewpoints into discussions.

In “Conversations with People Who Hate Me,” an American podcast, host Dylan Marron talks to those who previously abused him online in an attempt to encourage respectful debate on controversial issues. The conversations are mostly cordial; In an interview with Fast Company, Marron reflected on the success of the project: “Most people soften when they feel listened to. And they’ll even listen to you in return.”

Lan hopes to encourage similar respectful engagement on the Chinese internet to prevent online debates becoming the personal troll-fests, and avoiding “simply arguing, seeing whose voice is louder, then seeing which point of view fits my mood.”

For Katie, this kind of respectful online environment is difficult to imagine—the attacks she endured could hardly have been more personal. “I was really shocked. And sad…why do they have a right to do that to me?”

As for what she would say if she were to meet any of her online abusers, she says, “I think I would just cry. And I don’t want to meet any of them, I think they’re losers. Those people make the app dirty.”

Tackling the Trolls is a story from our issue, “The Good Life.” To read the entire issue, become a subscriber and receive the full magazine. Alternatively, you can purchase the digital version from the App Store.