When Zhang Huimin attended her first “parenting class,” a free teaser organized by her son’s kindergarten, she didn’t think she’d learn much. But 10,000 yuan and eight months later, Zhang is full of pride at the results.

“When I came back from my second class, my child said, ‘Mom, how did you become so good?’” the 33-year-old brags to TWOC.

The mother of the philosopher Mencius, an exemplar of virtuous parenting from China’s history, famously moved house three times to provide her son with the best learning environment. Today’s parents though, can sign up for “family education” classes, also known as “professional parenting” courses, to correct their children’s study habits, improve their psychological health, and even cure their internet addiction (according to one family education company).

After the free course, Zhang signed up to continue her education at Love, Nature, Vitality, a private company in Ordos, Inner Mongolia, where courses last from one afternoon up to a whole week. Zhang also participates in WeChat groups and an informal salon to discuss concerns with other mothers, and studies parenting books and podcasts. 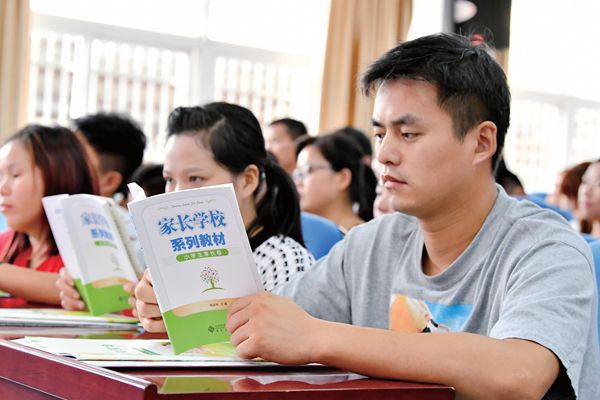 One recent class taught the importance of language and its careful application. “Before, [my son] would accidentally smash something and I would get angry,” Zhang says. “But now I stay calm and say something like: ‘You need to be a bit more responsible.’”

Zhang is not alone in feeling anxious about her parenting skills. “[Chinese] parents are constantly comparing themselves to parents in other countries…it has kind of raised Chinese parents’ anxiety levels,” says Cui Lixian, Assistant Professor of Psychology at New York University Shanghai. In 2018, a survey of over 3,000 parents by Sina Education found that 68 percent worry about their child’s upbringing, while 80 percent feel that they need help educating their child.

A lack of proper parental education and discipline is often blamed for disruptive behavior by young children, known as xionghaizi (熊孩子, literally “bear children”), whose ruckuses in public spaces have become increasingly visible in mainstream and social media. In one viral video, a mother watches impassively as her 12-year-old son berates a waitress for asking him to lower his voice. When parents wrote to a Guangdong museum earlier this summer, complaining that their children weren’t allowed to run around, the People’s Daily was unsympathetic—“the source of ‘bear children’ lies with ‘bear parents,’” it commented.

Meanwhile, movies like last year’s Einstein and Einstein (《狗十三》) have highlighted the long-term impact of Chinese parents’ emphasis on achievement over empathy. In the story, a teenage girl battles a father who wants her to get good grades, even as he is too consumed with work to provide her emotional support. 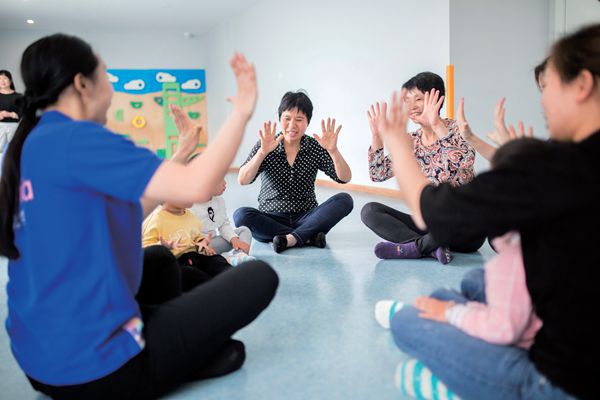 On podcast and audiobook app Himalaya, a search for 家庭教育 (“household education”) yields 14,000 results. One popular channel, “Help Your Child Love Studying,” has over 230,000 subscribers, while over a million Weibo users follow the account “Weibo Family Education.” Zhang’s favorite parenting resources include books like Positive Discipline by American family and child therapist Jane Nelson, and The Secret to Awakening Your Child’s Inner Talent by psychologist Li Shengjie, a proponent of unlocking a child’s “subconscious” potential by avoiding constant criticism of their mistakes or diminishing their willingness to take risks.

Education companies, traditionally focused on providing children with extra-curricular training, are also jumping on the trend. New Oriental, one of the biggest education companies in the country, has a separate platform for family education with parenting courses in over 100 cities. Powers Education, based in Shenzhen, claims to have helped over 213,000 families through its parenting classes.

Xing Yaping, a 37-year-old insurance worker in Beijing, began attending courses in 2014 when her son turned four: “I thought that he seemed much too well-behaved, too passive…he ought to be a bit naughtier!” The courses, though, taught her that this wasn’t necessarily a problem. “It’s just that every child has their own personality, so the communication style is different with every child.”

Xing was raised in an emotionally distant family, and believes that parental emotional intelligence has improved in her generation. “I love [my children], and express my love for them. And when my son expresses himself, he knows he’ll have his mother’s respect. These are all things that my parents weren’t conscious of.”

Zhang, too, says she is learning that children can be respected, without being held to the same standard as adults—opposite to her own upbringing. “When I was growing up, adults would often say to me, ‘Nothing else concerns you, you only need to study hard.’” 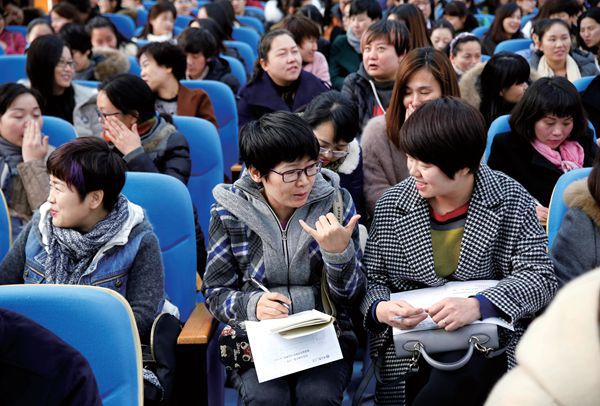 At Zhang’s lastest class, the teacher, a psychological consultant, asked parents to discuss problems they’ve been having with their children, then used music to help them reflect on their feelings. Role-play activities reinforced their understanding of parenting theory, including positive discipline and Neuro-Linguistic Programming (NLP), two American philosophies that emphasize mutual respect over punishment, and aim to help parents become more emotionally self-aware to break down communication barriers with their children.

In between, they read quotations from “Poem of the Frog,” a verse about leadership attributed to Chairman Mao, and references to John D. Rockefeller as an example of how to create a long-lasting “positive family atmosphere.” Xing says that many of her classes also refer to classical Chinese texts and concepts like filial piety. “Parents try to find a balance between these modern ways and these more traditional ways, and also a Chinese versus Western way, or another way,” says Professor Cui.

Li Jingying, who runs Family Plus, a private parenting school in Beijing, says that all classes are based on foreign theories, like positive discipline, but “must have Chinese elements.” Family Plus’ brochure suggests that American theories are heavily featured in the marketing. Their students are mostly parents born after 1980, along with some who are still childless. They pay from 60 RMB (about 10 USD) for a two-hour informal introductory salon, to several thousand for an advanced eight-day series of workshops and lectures.

One tradition, though, has remained stubbornly rigid—the parenting classrooms are full of mothers, but few fathers. Among Chinese mothers, the phenomenon of absent partners is referred to in a tongue-in-cheek way as “widowed child-raising” (丧偶式育儿). But Zhang says that lately she’s seen more fathers in class, and has even managed to drag her own husband along—he enjoyed it, she claims.

Academic achievement remains important, even as parents seek a better emotional bond with their children. Li of Family Plus, though, hopes that parents won’t see the two goals as being in conflict, citing her experience with her own son, now a second-year university student, as an example. “My son is not clever and has never been to cram classes, but studied on his own…we let him develop on his own,” she boasts. “For him, the college entrance exam was easy; the day before, he was playing games.”

Back to School is a story from our issue, “The Good Life.” To read the entire issue, become a subscriber and receive the full magazine. Alternatively, you can purchase the digital version from the App Store.