A few months after moving to Hangzhou in 2011, Ursula Pelt and her husband David Kay were zipping around on their e-bike when they saw a lonely looking toy poodle puppy in a pet shop window. “I loved him straight away,” Ursula reminisces.

Despite David’s futile protests, she asked for the price and bought the puppy on the spot. “After a few minutes, my husband surrendered to the cuteness and I let him name him after his favorite soccer player, Pepe Reina.”

Pepe (pronounced “Peppay”) loved to learn tricks and quickly became a fixture of the couple’s neighborhood. Pepe went everywhere with Ursula and David, even after they had two young children. Pepe’s favorite moments were the family’s leisurely trips to the countryside of Zhejiang province.

When Pepe ran off during a walk with their two children close to Chinese New Year in 2017, Ursula and David were not too concerned at first. Everyone in the neighborhood knew and loved Pepe, and the family made posters and plastered them around. As days turned into weeks, however, they began to lose hope.

“Our oldest daughter kept asking where Pepe was and we didn’t know what to tell her,” Ursula recounts. “We finally decided to tell her that Pepe had decided to go on an adventure and travel around China. It became our way of saying goodbye.”

Ursula and David’s bedtime stories of Pepe’s adventures are now a four-volume series of bilingual English-Mandarin board books, published earlier this year by The Commercial Press, the oldest continuously operating publishing company in China. Young readers can now delight in Pepe’s adventures in Beijing, Shanghai, Hong Kong, and the Chinese countryside. 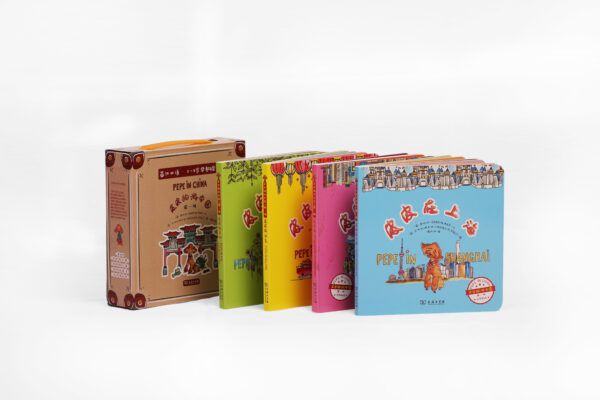 “We decided to turn Pepe’s stories into a children’s book series because we thought it would be a good way for foreign children to learn about China,” Ursula says, noting she and David are often surprised at how little their family members in the Netherlands and the UK know about Chinese culture.

Ursula, who works as a fashion designer for a Shenzhen-based company, illustrated the books. David, who is an editor and musician, wrote the text. “We play together in a band, so we are used to collaborating creatively together. It seemed like a natural fit: my drawings and his stories,” says Ursula.

The books were translated into Chinese by Chu Dandan, the executive publisher and chief editor of The World of Chinese magazine. To help Chinese children improve on their English vocabulary and pronunciation, The Commercial Press has provided a QR code with each book, connected to a digital recording of a native English speaker reading the book out loud.

As for future plans, Ursula hopes to keep the memory of Pepe alive. “We hope that this series is well-received, so we can tell more of Pepe’s adventures across China!”

Titles currently available on the Chinese mainland for 108.8 RMB, by scanning the QR code above

Available for purchase overseas via Amazon, as well as The World of Chinese Web Shop for US$39.99 (including international shipping).

For additional information or to schedule interviews with the author and illustrator, please contact Emily Conrad (emilyconrad@theworldofchinese.com)