Ancient trees may not be part of the typical tourist itinerary to Xi’an, home of the famed terracotta warriors—but earlier this month, a Buddhist temple in the Shaanxi capital had to set up an online reservation system for its 1,400-year-old ginkgo, which eager visitors were lining up for four to five hours to glimpse.

The ginkgo tree, scientifically known as ginkgo biloba, originated in China during the Permian Period. It is a “living fossil” that has not changed in all of its 200 million years of existence, and has no remaining relatives in the world.

The name “ginkgo” actually comes from miscommunication. According to a 2015 paper by Dr. Tasiu Isah, a botanist at Hamdard University, the name is derived from the mishearing of the trees’ Japanese name yin kwo, which means silver fruit. The plant got its other English name, maidenhair tree, from its resemblance to the maidenhair fern.

The ginkgo originated in China and thrived until it began to decline during the last ice age over 1 million years ago. Sources disagree on whether or not the ginkgo tree was saved from complete extinction by being planted in monasteries by monks.

“It is certainly true that there are many ancient ginkgo trees in the grounds of temples—and that these are most likely cultivated—but there are other old ginkgo trees that seem to grow not associated with the temples, so it is not completely clear that the tree was saved by the monks,” Sir Peter Crane, a ginkgo tree expert at Yale University, writes in an email to TWOC.

“Exactly why the ginkgo trees were on the verge of extinction is uncertain, but it was most likely to do with the climatic changes over the last 10 million years,”  writes Crane.

In his book, Ginkgo: The Tree That Time Forgot, Crane details the ginkgo’s origins in Chinese society. The first mention of the tree was in the famous poem “Shang Lin Fu” written by Han poet Sima Xiangru in the second century BCE. It was called ping (枰) at that time. Another early reference to ginkgo is through poems exchanged by poet Mei Yaochen and Chinese historian Ouyang Xiu during the late 10th century. 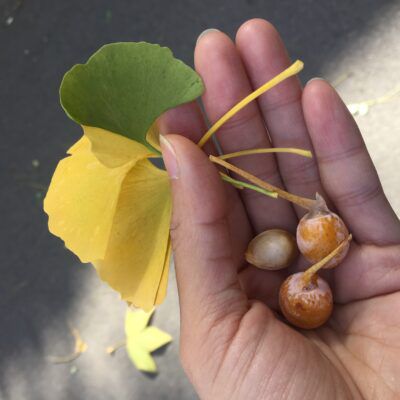 In these poems, Ouyang gives Mei ginkgo nuts from a ginkgo tree that was raised in one of the Seven Ancient Capitals of China, Kaifeng. Mei thanks his friend and mentions the ginkgo trees in his hometown of Xuancheng. Their correspondence ends with Ouyang saying a poem about the history of cultivating ginkgos. Both of them call the ginkgo yajiao (鸭脚), which means “duck foot” and yinxing (银杏), “silver apricot,” the name for ginkgo used in China today.

By the Yuan Dynasty, many references detail how ginkgos were grown for its seeds. The earliest work with instructions on cultivating the ginkgo was the Nong Sang Ji Yao (《农桑辑要》) in 1273.  The seeds are still a common treat in China today. After the seeds are cooked, their texture becomes gummy and ready to consume. The seeds can be served in a variety of ways: roasted, salted, and in congee (although eating too many of the seeds or eating them raw can be harmful due to ginkgotoxin, a toxin exclusive to ginkgo seeds).

Ginkgo seeds have a very distinctive and strong smell, sometimes compared to vomit. Scientists believe the strong scent is designed to lure animals to eat the seeds and disperse them when the seeds make their way through the animals’ digestive system. Ginkgo trees are dioecious, which means there are two sexes; a female which contains the seeds and a male that provides the pollen.

Ginkgo seeds and leaves are used extensively in traditional Chinese medicine. The first mention of the ginkgo being used in medicine is in a 2,000-year-old book called the Shen Nong Ben Cao Jing.  Later texts mention the seeds used in concoctions to treat everything from lung tuberculosis, asthma attacks, frequent urination, and bedwetting. The leaves are used to treat heart and lung diseases.

The tree also had religious and cultural significance throughout Chinese history. Ginkgos are commonly seen at temples and shrines. Ginkgo wood has been carved into religious statues. Ribbons and writings were also placed on the trees by local people to share their prayers and hopes.

As Crane describes in his recent paper, “An Evolutionary and Cultural Biography of Ginkgo,” the trees downward-growing roots are connected with fertility and nursing. Shinto and Confucian philosophy also view ginkgos as symbols of resilience, vitality, and longevity.

Due to its beauty and healing powers, ginkgo trees have become a popular around the globe—planted in gardens and sidewalks in cities like Seoul and New York, and used in extracts from leaves to treat memory impairment, vascular diseases and dementia. 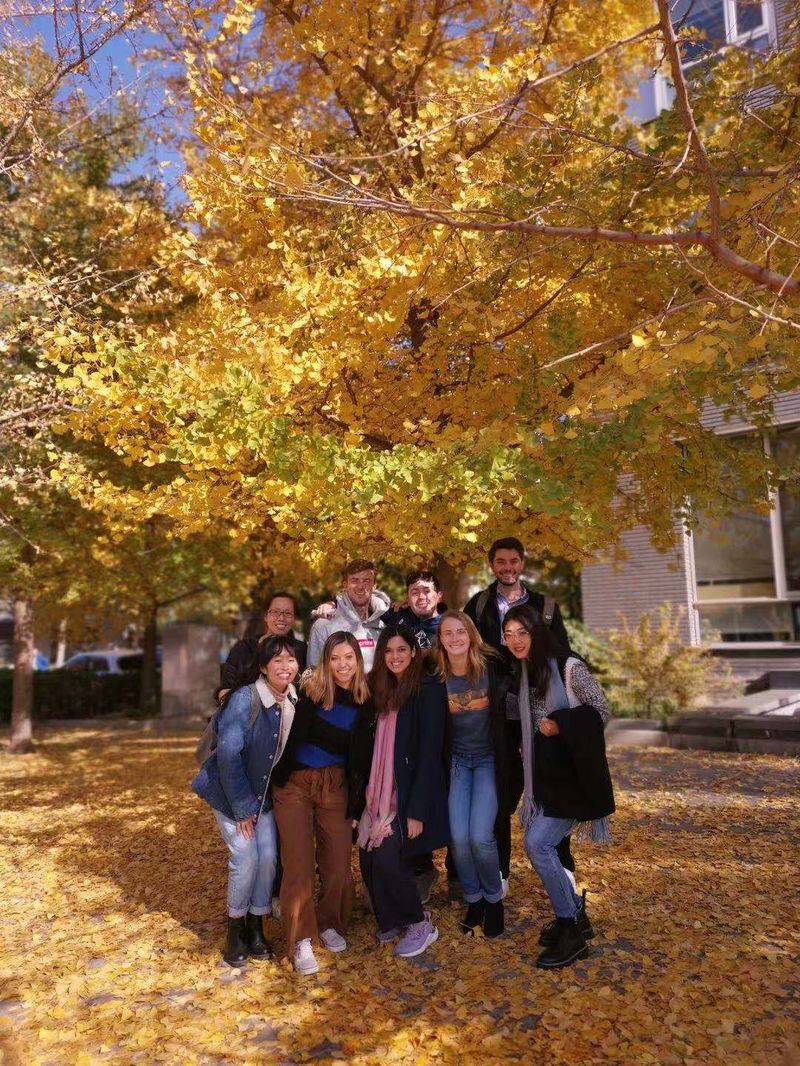 Crane believes the tree is resilient and will be able to withstand potential man-made threats. “Ginkgo is a very tough tree that grows well in urban environments and is able to withstand considerable amounts of urban pollution,” he writes to TWOC. He added in his recent paper, “Ginkgo reminds us that conservation through cultivation is an important means of protecting threatened plants.”

In the meantime, he enjoys collecting photos of the ginkgo’s golden foliage from around the world, as well as eating the seeds. “I’ve eaten many dishes made from ginkgo seeds. I quite like them deep-fried!”

Cover image of the ginkgo at the Old Guanyin Chan Temple, Xi’an, from VCG