In 1921, Swedish geologist Johan Gunnar Andersson went looking for animal fossils along the middle reaches of the Yellow River—and stumbled upon mysterious clay shards that didn’t seem to belong to any known culture.

Hurrying back to Beijing with his discoveries, Andersson concluded that he had found the remains of a Neolithic civilization dating from 5000 BCE to 3000 BCE. It came to be named the Yangshao (仰韶) Culture after the village where it was discovered in Mianchi county, Henan province.

One of several prehistoric cultures in the Yellow River Basin, the Yangshao depended heavily on agriculture, especially the production of millet. Its people also gathered food by hunting and fishing with the assistance of sharp stone tools that they crafted. Depictions of a jar, a frog, fish, a stork, and stone axe on Yangshuo pottery

However, the Yangshao’s skills did not lie in weaponry alone: They were known for their impressive pottery, which came in varying shapes resembling today’s urns, basins, and jars. The Yangshuo used these clay creations as bowls, drinking vessels, and coffin covers. The vessels were primarily colored in white, red, and black, and were often decorated with drawings: human faces; animals such as frogs, fish, or storks; and even symbols whose meaning remains an unsolved mystery to this day.

A Yangshao urn with a small opening and pointed base 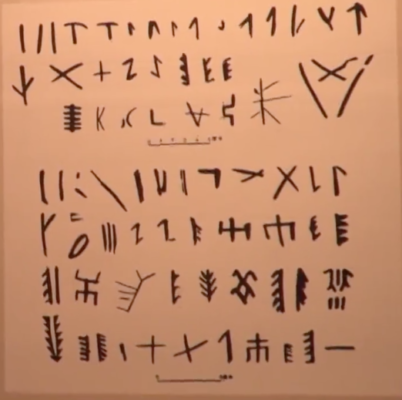 In this episode of TWOC TV, we visit the Yangshao Culture Museum in its namesake village, the first museum in China dedicated to this mysterious culture. Covering an area of 43 acres, it’s noted for being constructed in the shape of a clay pot. Learn more about Yangshao culture as we seek answers about their discovery, their stoneware and drawings, and the eventual fate of their civilization.