He may be the most important historical figure whose story you won’t get to watch this Spring Festival: Jiang Ziya (姜子牙), an eccentric angler-turned-statesman from the 12th century BCE, is the hero of a fantasy film of the same name that was pulled from cinemas ahead of its Chinese new year debut due to the novel coronavirus outbreak.

Also known as Legend of Deification, Jiang Ziya is an animated film in the style of last summer’s blockbuster Ne Zha. Unlike the snowy-haired, white-bearded portrayals of ancient sages in most movies, this film’s title character as middle-aged. Taking its supernatural plot from the Ming dynasty novel The Investiture of Gods (《封神演义》), the film tells of how Jiang, a commander of among the gods, is banished to the mortal realm as punishment for a mistake, and must find his way back to the divine kunlun world without losing his commitment to righteousness and benevolence.

This is very different from the story of the historical Jiang, who is a mortal—though extraordinarily talented—politician and military strategist who helped establish the Zhou dynasty. The delay of the movie might be the perfect time to learn about this real figure behind the legend, who is no less impressive despite a lack of superpowers:

Jiang Ziya, also known as Jiang Shang (姜尚) and Lü Shang (吕尚), was believed to have been born around 1156 BCE in what is today’s Henan province. Most of what we know about him come from writings such as Master Lü’s Spring and Autumn Annals, by the Qin dynasty minister Lü, and Records of the Grand Historian by the Han dynasty’s Sima Qian.

According to historical records, Jiang was a late bloomer. His family had fallen into poverty by the time he was born, so the young Jiang held a variety of jobs including butcher and innkeeper, while teaching himself astronomy, geography, statecraft, and military strategy. In some versions of the tale, he became an official under the reign of King Zhou, the last ruler of the corrupt Shang dynasty, but resigned and went to live as a hermit witnessing untold suffering and civil wars.

One day, when Jiang was already in his 70s, he heard that Ji Chang, a duke on the western frontier, was recruiting talented ministers into his service. Jiang journeyed to the duke’s realm, but rather than seeking audience with him, he went fishing every day on the shore of the Wei River (near present-day Xi’an). 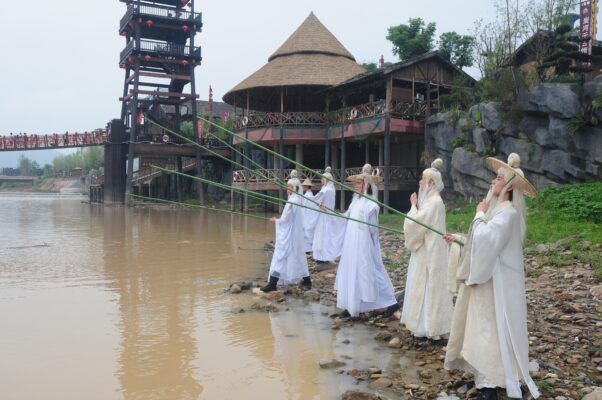 Jiang cosplayers participate in a fishing competition in Changsha in 2017

Years later, the duke saw Jiang fishing while out on a hunting trip. Curiously, the old man used no bait, but simply muttered “姜太公钓鱼，愿者上钩 (When Lord Jiang fishes, there are always fish willing to be caught).” A woodcutter had teased him, saying, “You never catch any fish in a hundred years,” and Jiang replied, “You do not know that I am fishing for kings and princes.”

The intrigued duke went to speak to Jiang, and was impressed by his intelligence and hired him as an adviser. Jiang helped the duke and later his son to topple the Shang and establish the Zhou dynasty. The phrase “姜太公钓鱼，愿者上钩” also became a well-known idiom, meaning that people of stellar ability will naturally attract others.

Eccentricity aside, Jiang is also renowned for his military expertise. Jiang is credited with the feat of writing China’s oldest book of military strategy, the Liutao or Six Secret Strategic Teachings, centuries before Sun Tzu wrote the globally renowned The Art of War.

While serving under Ji Chang, who became posthumously known as King Wen of the Zhou, Jiang helped the duke establish alliances with many other states that felt oppressed under the Shang. After the Zhou’s founding, Jiang was made duke of the Qi state in present-day Shandong province in order to pacify the realm’s eastern frontier. There, he created a merit-based system of selecting officials, showed tolerance for local customs, simplified court rituals, and encouraged fishing, salt production and commerce. This attracted talented people from all over the realm to settle in the Qi state.

As with many ancient heroes and sages, stories about Jiang grew more fantastical over time, and he came to be worshiped as a supernatural being. Supposedly, he was 139 when he died.

According to legend, Jiang was originally set to become the Jade Emperor, the ruler of all gods. However, his assistant Zhang Youren sabotaged this plan. At the ceremony where the gods were being named, Zhang hid under the Jade Emperor’s throne. When someone asked, “Will anyone succeed the Jade Emperor,” Jiang replied, “Yes.” At this point, Zhang jumped out and sat on the throne, thus claiming the position.

An ancient saying related to this legend, “太公在此，诸神退位 (Should Lord Jiang be present, all gods would abdicate,” indicates the common people’s respect for Jiang, as they believe he overshadows every god.

The sage on the screen

Jiang has been a character in multiple TV series and movies. Most adapt his story from The Investiture of Gods, where Jiang is said to be the ruler of all gods, rather than from history.

In the 1990 TV series The Investiture of Gods , Jiang is played by the well-known actor Lan Tianye (蓝天野), whose portrayal set the standard for subsequent adaptations. 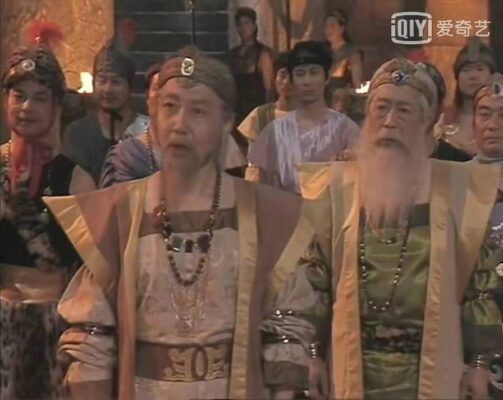 The year 2009 saw the release of TV series Legend and Heroes, in which Liu Dekai (刘德凯 ) played the white-bearded sage. In the series’ 2015, though, actor Chen Jianfeng’s (陈键锋) youthful portrayal earned him praise as the “most handsome Jiang.” 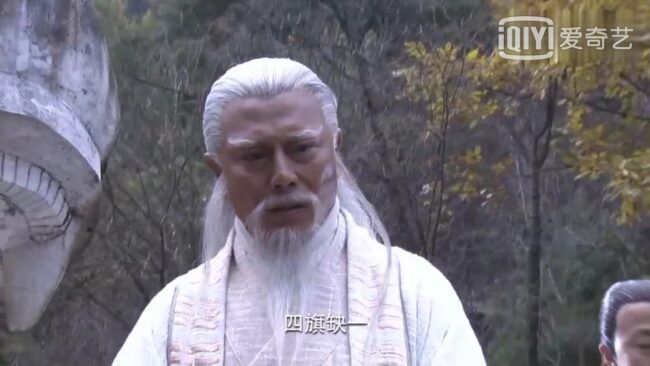 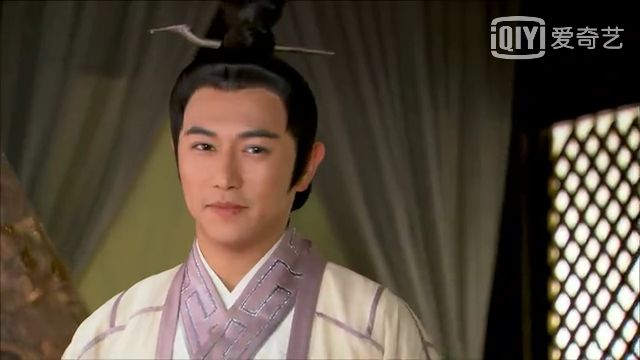 This year’s new animated film is set to add more complexity to how Jiang is portrayed. Despite the delayed release, the film still is highly anticipated. “We will wait for your return,” pledges one user on Weibo: It seems that plenty of movie fans are still willing to be “caught” by the sage.