Rural students struggle to connect to online classes during Covid-19

A live streamer conducts a survey of viewers while broadcasting: “If you understand, type 1; if not, type 2.”

But this isn’t an online merchant conducting market research for lipstick: It’s a teacher conducting a class to students. China’s coronavirus outbreak has made online celebrities out of scores of educators, and remote learning the new normal. But not everyone is getting the education they need.

Last week, a middle school student in Dengzhou, Henan province, was reported to have attempted suicide by overdosing on medicine after failing to attend live streaming classes delivered by her schoolteachers—her family could only afford one smartphone and had given it to the girl’s sister to access her own online class. In Luoning county, also in Henan, a student was forced to do her homework on a desk outside the village committee office in freezing temperatures because the internet signal was too poor at home.

Schools have embraced online teaching as a means to deal with nationwide quarantine measures in response to the Covid-19 outbreak. On January 27, China’s Education Ministry decreed that the new semester for schools and universities must be delayed to contain the spread of the virus, but authorities made clear that “school suspension doesn’t stop studying.”

Yet this trendy way of teaching has not been rolled out smoothly everywhere, and not everyone has the means to make it work. In impoverished rural areas where some households lack internet access and smartphones, students have struggled to take online classes, if their schools even have the means to provide them. Internet speeds are likely to be slower in rural areas, meaning children in the countryside risk falling further behind their more privileged urban peers.

On Weibo, the hashtag “Children who can’t get online classes (上不了网课的孩子们)” has gained more than 24 million views. Even teachers are struggling with slow internet speeds in some areas: A Shenzhen-based teacher stuck in a village in Hubei province, where travel is heavily restricted, has been forced to live stream her classes from the roof of her family home because the internet signal is stronger there.

Since more public attention has been brought to the problem, efforts have been made to improve the online experience for those in rural areas. In Dengzhou, the family later received two mobile phones from the girl’s school, as well as bedding new household appliances, bedding, and 5,000 RMB from the local authorities. And in Luoning county, China Unicom, a major telecoms operator, installed Wifi in the student’s home free of charge. 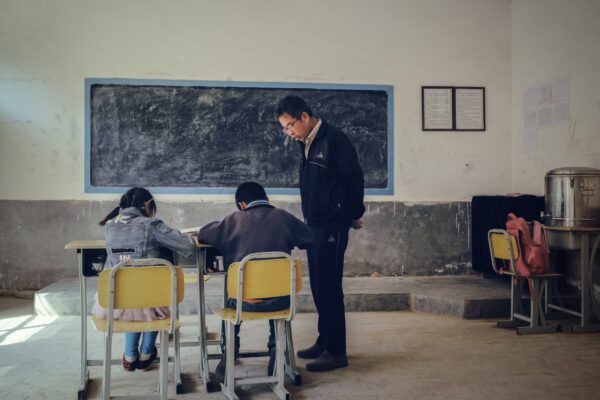 In areas with poor internet access, television is providing an alternative, with some stations, like Channel 4 and China Education Television, broadcasting classes. Since February 16, course materials for primary, middle, and high schools have been shown from 8 a.m. to 10 p.m. every weekday on some channels.

In Fenggan, Guizhou province, schools have taken a vintage approach to teaching class during the outbreak by broadcasting lessons over the village wired radio system. Teachers read texts over the speakers, and students repeat afterward.

Several cities and regions, including the northwestern Ningxia Hui Autonomous Region, have also set up “airborne classrooms (空中课堂)” to provide rural students with high-quality learning opportunities which local schools may be unable to provide. Under this system, highly qualified teachers can teach classes online or on TV to students across the entire region—some teachers are teaching over 10,000 students at a time.

Despite these efforts, there remains a huge digital divide in many rural parts of China, which is effecting education. On March 3, Xinhua reported on a county in western China where more than 2,000 students can’t access online courses due to an absence of internet, computers, and mobile phones.

Under these circumstances, poor rural students, already at a disadvantage in terms of the quality of education they receive, may fall further behind their urban counterparts. The epidemic and its prevention measures have revealed that poverty relief measures still have a long way to go when it comes to internet infrastructure in rural areas.