“We hope that we can help Hubei restore work and life through this livestreaming show,” Li Jiaqi, an influencer who first made his name selling lipstick, told his online audience on Monday as he prepared to showcase made-in-Hubei products such as “hot dry noodles” (热干面) and rice wine.

Part of a special livestreaming event called “Thanks for buying up Hubei products,” Li’s show was broadcast on Taobao Live in collaboration with Zhu Guangquan, a well-known CCTV News host, with more than 15 million viewers tuning in. The philanthropic endeavor aimed to promote products from Hubei province, the original epicenter of the coronavirus outbreak and worst-hit area in China, to help the local economy recover after months of preventative lockdown. The two-hour stream raked in over 40 million yuan in sales.

The Covid-19 outbreak has played havoc with vast swaths of the economy, and driven explosive growth for online services, as quarantined, self-isolating, or simply crowd-shy consumers stay indoors. The agricultural industry has taken a big hit, with produce rotting in fields and planting schedules delayed due to transportation shutdowns across the country. 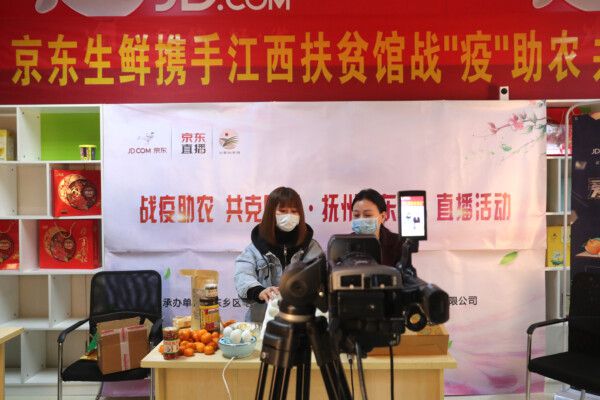 With hundreds of thousands of farmers struggling, some have turned to livestreaming to sell their products, helped by companies which have launched campaigns to “assist agriculture” by promoting farm goods.

Even government officials have taken up livestreaming to hawk local produce. A number of village heads have made their debuts on e-commerce platforms such as JD, Pinduoduo, and Taobao, as well as short video app Douyin (TikTok), which have opened livestreaming channels specifically for affected products like crayfish in Qianjiang in Hubei province, taro of Lipu in Guangxi, and tea oil of  Lu’an in Anhui.

Officials are also picking up livestreaming a tactic for wider poverty relief campaigns in remote rural areas, which ramped up this year due to the central government’s deadline to totally eradicate poverty in China in 2020. Internet company Bytedance, which owns short video platforms iXigua Video and Douyin, and news app Jinri Toutiao, has launched a campaign in tandem with official poverty alleviation departments named “working together to help farmers fight against the epidemic (齐心战疫八方助农).” In Guangxi, the vice mayor of Beiliu city joined a livestream to help local farmers sell their fruit, flogging 120,000 kilograms and racking up sales worth 840,000 yuan in just three hours.

However, ensuring the quality of products advertised via livestream match those delivered to customers is not always easy. While key opinion leaders (KOL) like Li and Huang, are usually considered reliable judges of quality and performance for products, guaranteeing freshness and quality of agricultural products is especially tricky. Li himself has told Zaker Media that buying farm products online is a lottery, consumers can only “pray“” that their purchases arrive intact, and are of high quality.

In the rush to help struggling farmers make a living, regulation of livestreaming and selling has been lax. Some vendors and online livestream hosts have used the nation’s goodwill to make profit for themselves, selling products at commission, or putting up low quality goods that they normally would not have taken to market. “Vendors will never make a loss; there’s always a reason why it’s cheap,” a Douban user cynically commented after finding that 80 percent of the persimmons she ordered had rotted on arrival.

Platforms are now expected to do their part to regulate. On February 21, Chinese e-commerce giant Alibaba Group proposed new rules calling on sellers to offer high quality products in return for the assistance offered by consumers.

Amid lackluster sales for products battered by the Covid-19 outbreak, livestreaming has provided a lifeline for some, but still has a way to go before it becomes the norm for farmers. “Official livestreaming has played a significant role in helping farmers deal with the impact of the epidemic, but it should focus more on creating growth for the industry behind the live show,” online celebrity Yang Jianguo wrote on Weibo. “In addition, more e-commerce training is a must for empowering modern rural areas in the long run.”