In 2017, Jiangxi tourist Fei Jianqin visited Ruili, a city in Yunnan province near the Myanmar border and well-known distribution center in the Chinese jade trade—and learned a hard lesson about the value of the precious rock.

Like most tourists to the frontier city, Fei’s itinerary included a visit to a well-known local jade store, where she tried on a bracelet. On hearing that the trinket was priced at 300,000 RMB, Fei tried to take it off, fumbled, and dropped it, breaking it into pieces. Upon seeing the damage, she fainted with shock.

Much of the public sided with Fei in the brouhaha that followed, blaming the seller for putting such a valuable item on casual display, especially after it emerged that Fei had to compensate the store 70 percent of the product’s value (thankfully re-appraised by a third-party organization at 180,000 RMB). 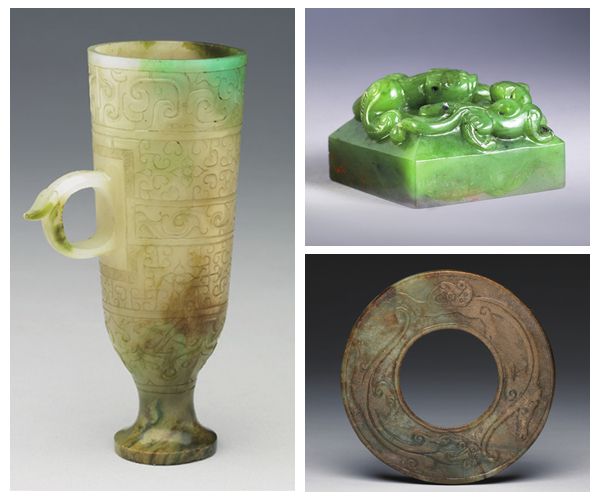 Serious collectors, though, had little patience for these amateur blunders. “There is a saying, ‘jade shouldn’t pass through one’s hands (玉不过手),’” a jade expert surnamed Wang from Fujian Jewelry Association told Sohu afterward. “After the jade is touched, its surface will no longer be clear, making it difficult to tell whether the product is real or false.”

“What’s more,” said Wang, “jade is fragile. Once it drops during passing, it’s hard to decide whose fault it is.” According to local jade sellers, the bracelet that Fei broke was just a “medium-range one,” and it’s not difficult to find pieces worth millions casually displayed on the counter of one’s local jewelry store.

As a Chinese saying suggests, “Gold has a price, while jade is priceless.” This is literally true today. Unlike diamonds or gold, no international pricing index exists for jade. Instead, the price of each piece is set between the seller and the buyer in private transactions or public auctions based on the rock’s size, shape, transparency, texture, place of origin, craftsmanship, and even ownership history.

Prices vary dramatically: On online marketplace Taobao, one can buy a small jade amulet at 100 RMB (15 USD). However, in 2015, Sotheby’s Hong Kong auctioned off an art deco jade brooch by Cartier for 930,000 USD.

The other is nephrite, or “soft jade” (软玉), which traditionally comes from western China and was in vogue long before jadeite. Usually found in creamy white or a variety of light green hues, it’s also referred to as “Hetian Jade,” after the region in Xinjiang that historically produced it. It’s this lustrous type of jade that has been frequently extolled in traditional Chinese literature—compared to the complexion of beautiful women, invoked to symbolize moral purity, and linked to mythical figures like the Jade Emperor, the ruler of heaven. 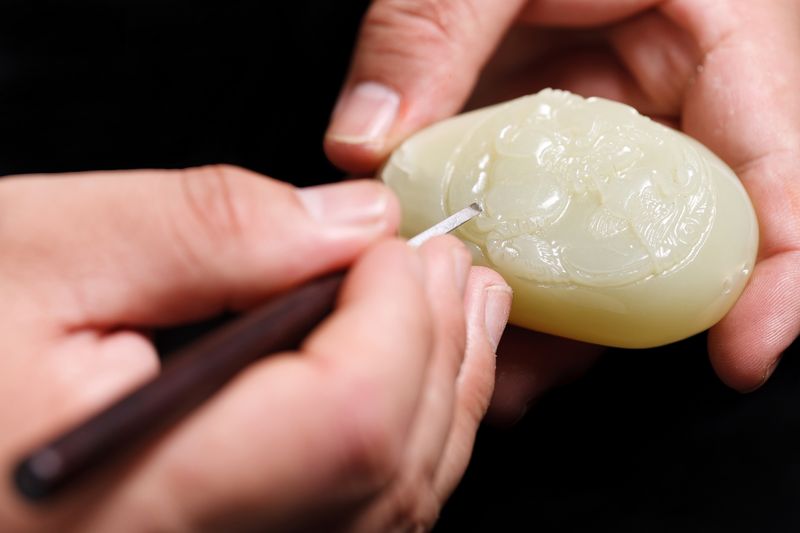 Any mistake from the carver will devalue the jade (VCG)

All of this has led to China’s jade investment sector booming faster than regulations can keep up with, buoyed by rising domestic consumption and several millennia of cultural feeling. Online sales channels have also recently entered into the mix, further blurring the lines for new investors on what is real, fake, or valuable.

Though China does not publish the amount of jade it imports from Myanmar—much of which is mined in the conflict-ridden Kachin State—the Harvard Ash Center estimated as of 2011 that the global jadeite trade was worth 8 billion USD, with demand almost entirely driven by the Chinese market. According to news website Vision Times, in 2016, the nephrite jade market was estimated to be worth 30 billion USD.

Liu Ziyue, a salesperson for a luxury brand in Paris, believes only Chinese customers have special feelings for jade. “In the Western market, jade is never a mainstream good,” she says. While Western jewelry brands use jade, it’s treated no different from other gemstones. “When Chinese people wear jade, they always wear a whole piece; whereas Western customers might just use a small amount of jade, mounted in gold.”

Jade has never been just a gemstone in China. Archeological findings suggest that during the Neolithic Age, jade had already been used in China to offer as sacrifices to gods or drive away evil spirits. In the Spring and Autumn and Warring States periods (770 – 221 BCE), aristocrats began to wear jade accessories, with different items and colors denoting different social ranks.

Upon unifying the realm in 221 BCE, China’s first emperor, Qin Shi Huang, is said to have fashioned an imperial seal from the He Shi Bi (和氏璧), a priceless disk of nephrite. This “Heirloom Seal of the Realm” (传国玉玺) was fought over by a succession of later emperors and warlords as a symbol of their legitimacy to rule, before disappearing sometime between the 10th and 13th century—but jade’s association with power remained. Twenty-three jade seals belonging to emperors of the Qing dynasty are in the collection of Beijing’s Palace Museum.

The characteristics of the precious stone also became associated with Confucian gentlemen, or junzi (君子), who habitually wore a jade girdle to demonstrate their virtue. Second-century scholar Xu Shen concluded, based on Confucius teachings, that jade “embodies the five virtues”: kindness (symbolized by its gentle luster); righteousness (its transparency); wisdom (it can be made into musical instruments); bravery (it can be crushed, but never bends); and incorruptibility (it is sharp, but is never used to commit violence). These traits coalesced in the saying, “A gentleman does not remove jade from himself without reason (君子无故，玉不去身).”

Today, though, jade’s main consumers are “middle-aged women,” according to Fan Jing, a gemologist working for Guangdong Gem and Jade Exchange Center, a jade dealing organization. “Influenced by traditional culture, Chinese women have a special feeling for jade, and usually only those with certain economic status can afford jade of relatively good quality,” she explains.

According to Fan, consumers often pay attention to a jade item’s appearance first, and then look at its investment value. “Jade is only expensive when the material is of good quality, and made into relatively large objects, like bracelets or ornaments. Its value first depends on the material, then on the workmanship.”

If one can choose the right piece, jade can make for a spectacular investment. In 2014, a necklace once owned by Woolworth heiress Barbara Hutton was sold for 27.4 million USD at auction, more than six times the price it was auctioned off at 20 years prior.

Other collectors prefer an even riskier investment—“gambling rocks.” Investors buy a raw jade stone in the hope that there will be valuable jade within. Since it’s difficult to tell a jade rock from a normal rock, the investor does not know, until they cut it open, whether their purchase was priceless or worthless. An unopened rock may be sold and re-sold through several gamblers, its price inflated with each transaction as the mystery builds.

But even if one buys a valuable jade stone, and extracts a fine jade piece, there is still no guarantee of return. “Sometimes, you buy the jade material at 10,000 RMB, and ask a master to carve it. But if the master makes a mistake, the value will decrease,” says Zhang Huimin, a 34-year-old jade lover from Inner Mongolia.

Zhang is one of a number of collectors who prefer Hetian jade to jadeite. “Jadeite has just been hyped up in recent decades,” Zhang analyzes. “It didn’t spread in China until the Qing dynasty, when Myanmar paid it as tribute to the Qing government. I feel it doesn’t have any vintage, only a spectacular price.”

Zhang received her first jade piece as a teenager, when her father bought her a jadeite bracelet from Yunnan province. This item was accidentally broken when Zhang was in university, but she still keeps the pieces. “There is a saying, if jade breaks, it has taken misfortune on behalf of its owner,” says Zhang.

Since 2017, Zhang has been collecting jade by herself. By now, she has bought over 20 pieces, mostly bracelets, pendants and strings of jade beads. “I almost have all the colors,” she boasts. “I also have two raw nephrite rocks.” 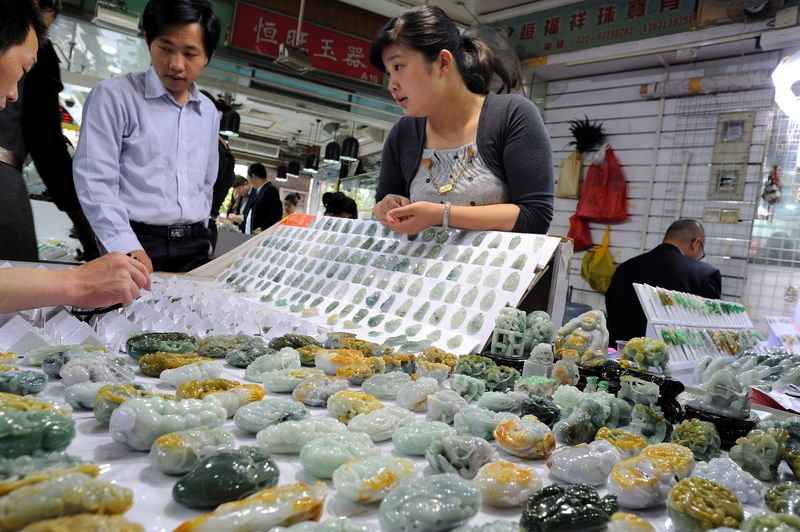 Buyers can bargain with the seller in the jade market (VCG)

All across China, multiple sales channels for the stone are growing, including jade exhibitions, auction houses, wholesale trading centers, retail spaces—and even social media. Zhang buys all her jade through Taobao’s live streaming service, watching a broadcaster display the item on camera before placing an online order, or entering in a live bid against other viewers. “[Physical] jade stores in my area often inflate the price, so I never buy there,” states Zhang.

But Zhang admits that it’s riskier to rely on internet channels. “Buying jade through live streaming means you have to trust the taste of the host. Usually, I will check how many followers they have, how long they have been in this industry and their past credit record. When you have seen enough, you can figure out some of the rules.”

However, even the vigilant aren’t safe from unscrupulous sellers. Chinese media reported in 2019 that a man surnamed Xu from Hangzhou, Zhejiang province, joined a WeChat group consisting of 255 members, where jade auctions are often held. After a month of lurking, Xu decided to join in the auction, and splurged about 70,000 RMB on four bracelets and one pendant.

To his surprise, when Xu brought his purchases to a professional jade appraising organization, he was told all of the pieces were made of either low-quality jade or even compound rocks. Xu reported the case to the police, who then found that all the other 254 accounts in the group were actually controlled by four busy swindlers.

Fan tells TWOC that such scams are common in the domestic market: In the nephrite trade, dishonest dealers may masquerade the more common “mountain jade” (山料) as the much rarer—and hence pricier—“riverbed jade” (籽料). Likewise, with jadeite, chemically treated “Type B” or artificially stained “Type C” rocks may be passed off as natural “Type A” jade. “One had better buy jade in trusted stores, and ask for certificates,” advises Fan.

Zhang, though, points out there are even stores that sell only fake jade—and that for some amateur buyers, the look and cultural prestige of the item are enough. “In some live streaming rooms, an entirely green jadeite bracelet may only sell for 100 kuai. Both the seller and the buyers know it’s a fake, though none of them will say so,” says Zhang. “[Some] people buy them only for fun, after all.”

A user on Masok. com, an online shopping forum, agreed, writing “A true jade lover won’t judge if a piece of jade is real or fake. As long as it’s a good jade, it is priceless. Everyone has a different understanding of jade culture.”

Zhang believes that it’s not only the market value that draws Chinese consumers to keep coming back for more despite all the rock’s uncertainties as an investment. “I remember when I was a kid, my grandfather had a tobacco pipe with its cigarette holder made of jade, and I liked it very much,” Zhang says. “I think perhaps jade embodies the characteristics of Chinese people—gentle, smooth, and quiet, not aggressively shining like other gems.”

The Jade Rush is a story from our issue, “Alpine Ambitions.” To read the entire issue, become a subscriber and receive the full magazine. Alternatively, you can purchase the digital version from the App Store. The enduring cult appeal of an 18th-century literary classic