From military hardware to cultural heritage to children’s toy, kites have a 2,300-year history in China

Since their invention in China over 2,000 years ago, kites have gone from essential military equipment to popular pastime of the masses in parks and squares, with kite-making even named an intangible cultural heritage.

The great philosopher Mo Zi (墨子) is the supposed inventor of the kite back in the Warring States period (475 – 221 BCE). His wood-and-cloth proto-kite was known as mu yuan (木鸢), or “wooden eagle.” Mo Zi’s first attempt at kite-making, however, was a failure. According to the philosophic text Han Fei Zi (《韩非子》), “Mo Zi created the wooden eagle in three years, but it failed its first trial.” Mo Zi amended the design, and later one of his disciples, Gongshu Ban, replaced the heavy wooden frame with bamboo.

Early kites were not designed for entertainment but for use on the battlefield. They were tools for measuring distances and for communicating with other military divisions. Legend states that at the Battle of Gaixia in 202 BCE,  when the warlord Liu Bang’s troops encircled his rival Xiang Yu’s army, Han Xin, one of Liu’s generals, tied a soldier on a huge kite made of cowhide to play the flute and sing Chu ballads (楚歌) from Xiang hometown, which demoralized his homesick soldiers (another version goes that Han simply tied flutes to the kites, and soldiers sang along to the whistling tune they made). Han also used kites to gauge the distance between his army and Weiyang Palace, where the enemy was hiding, in order to dig a tunnel and sneak into the palace to launch a surprise attack.

During the Northern and Southern Dynasties (420 – 589), when emperor Wu of the Liang Kingdom was under siege by rebels, he used a kite to send a letter to his son for help. Unluckily for the emperor, the kite was intercepted and the emperor was captured. 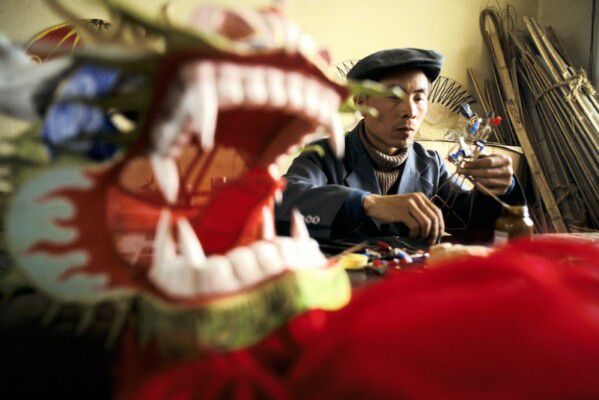 When the paper-making industry began to flourish during the Tang Dynasty (618 – 907), paper kites (zhǐ yuān, 纸鸢) emerged. This less cumbersome model became popular among commoners, and since then the kite has been used for entertainment. “After school the children come home early, keen to fly kites while the east wind blows” wrote Gao Ding, a 19th century poet, in “Living in the Village.”

In the latter stages of the Tang dynasty, craftsmen began carving small openings on the bamboo framework of the kites. When these kites were flown, the holes would generate musical notes, said to be similar to the sound made by a Chinese zheng (筝), a stringed zither. Kites became commonly known as  feng zheng (风筝), or “wind zither,” the name still used today.

In the Song dynasty (960 – 1279), kite-flying became even more popular among the masses, especially during the Qingming Festival period. In Zhang Zeduan’s famous painting of the period, “The Riverside Scene at Qingming Festival (《清明上河图》),” kite-flyers are prominent in his depiction of the then capital, Kaifeng.

Different regions in China have developed distinctive kite designs and production techniques. Four major schools of kite design emerged: in Beijing, Tianjin, Weifang in Shandong province, and Nantong in Jiangsu province. Weifang, considered the birthplace of the first kites, has been named the “kite capital” of the world. Beijing kites are famous for ornately painted designs and exquisite framework, Tianjin’s for a unique wood design, while Nantong huge kites can perhaps cover the greatest distance and are decorated with whistles.

The decoration of kites is even more varied than their structural design. Patterns featuring bats are popular, as the word in Mandarin, 蝙蝠 (biān fú), is very similar to 遍福 (biàn fú), meaning to “enjoy happiness everywhere.” Depictions of phoenixes represent enterprising spirit and the pursuit of happiness, while dragons are popular as a symbol of longevity.

From military hardware to children’s toy, kites have remained a traditional part of Chinese life for two millennia, and continue to hold an important place in Chinese culture. Bringing the Porcelain Capital of the World into the 21st Century