The cradle of Chinese civilization maintains a distinctive dialect

As early as the Neolithic Era (5500 – 2500 BCE), a vibrant farming community along the Yellow River in modern-day Henan province made some of the earliest known Chinese art—yellow-orange pottery painted with elaborate black designs of animals and human faces.

The sweeping fertile flatland known as the “Central Plains” (中原), centered around modern-day Henan province, was the cradle of Chinese civilization. With three out of the seven ancient capitals of China (Luoyang, Kaifeng, Anyang) based in Henan, the area was also one of the most prosperous and densely populated of China until the end of the Northern Song dynasty (960 – 1127).

The city of Luoyang, the capital of nine dynasties, was host to the Luoyangyin dialect, the lingua franca of emperors, officials, and intellectuals. Southern Song dnasty (1127– 1279) poet Lu You (陆游) once hailed Luoyangyin the “most correct pronunciation” of the Chinese language, and it remained in official use until the Qing dynasty (1616 – 1911). 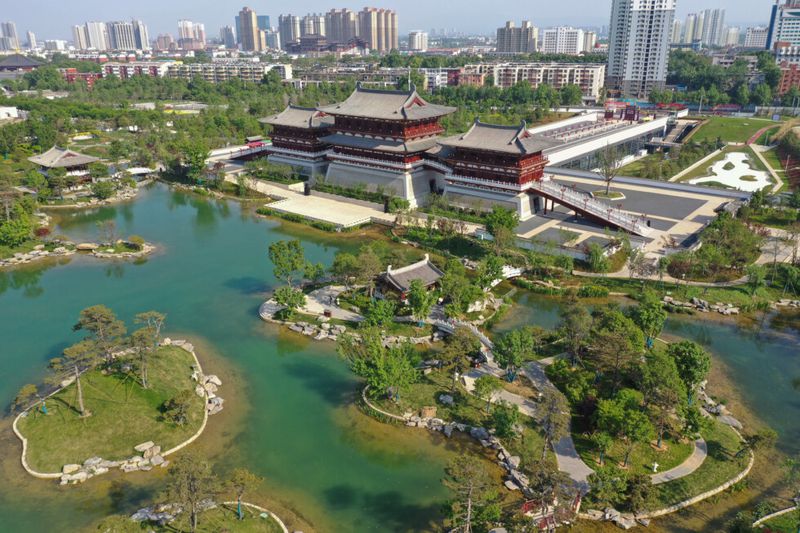 Luoyang was the capital of the Eastern Han, Sui, and Tang dynasties (VCG)

Today, Henan is China’s third most populous province, with 94 million people. Speakers of Henan dialect can be heard across the country as many people venture from the heartlands to coastal cities for work.

Our speaker hails from the city of Luohe, home of China’s largest meat processor that produces China’s favorite red-wrapped sausage snack, a favorite for train journeys and at tourist sites. The Luohe speech that you hear belongs to the largest Henan subdialect that is nearly ubiquitous across the flatlands.

You guys be careful doing business out there, don’t let people scam you.

“搉包” is a local phrase for “swindled and tricked.” Notice that when the speaker speaks quickly, many consonants disappear into the void.

Monosyllabic expressions for times (with an ‘er tacked on, inevitably) are dizzyingly abundant in Henan dialect.

In the village, people used to like to get together and chitchat.

To “huddle in the haystacks” (谷堆一坨) is a colloquial Henan expression for “get together,” as the grain fields were the key fixture of rural life. During mealtimes, people would gather to eat in the haystacks and trade information and “chitchat,” or literally, “spurt praise/boasting”  (喷夸).

What the hell, why are you so such a fool?

The exclamation 乖乖咧 is used to express shock, whereas a 信球 is an almost endearing expression that someone’s thinking is less than clear.

You killed it. (You did that really well.)

The verb 怼 means “to attack” or “to strike,” but just like in English, when applied to a task, it means to do something really well. Like you, for making it this far!

Cover image of the Longmen Grottoes near Luoyang from VCG