Whether it is in movies or literature, Chinese mothers tend to be portrayed as selfless, caring, devoted, and hardworking. Perhaps to please China’s censors, who are notoriously keen to safeguard “family values,” mainstream creators tend to extol great maternal love, beautiful mother-child relationships, and the value of filial piety in their works.

But mothers can also be angry, resentful, and hostile, and this is the reality that director and screenwriter Yang Lina explores in Spring Tide. Released on May 17 on video platform iQiyi due to the Covid-19 pandemic, the acclaimed film explores the multigenerational mother-daughter conflicts between journalist Guo Jianbo (Hao Lei), her widowed mother Ji Minglan (Jin Yanling), and Guo’s daughter Wanting (Qu Junxi), a fourth-grader.

The tagline on the film’s poster reads, “Your relationship with your mother determines your relationship with the world.” In this sense, Guo must have been fighting against the world for every minute of her life. A single mother, Guo lives in an old apartment together with her daughter and her own mother, Ji Minglan, a retired journalist who became a community cadre. In public, Guo acts as a strong-minded and capable professional, but once at home, she becomes a passive and resentful daughter suffering from a lifetime of her mother’s verbal abuse.

Though Guo almost never talks back to Ji directly, her silences showcase a continuous passive rebellion toward her mother and the audience. Actress Hao Lei contributes her best performance in several scenes where she doesn’t have any lines: Guo, full of hate, putting out a cigarette on a dumpling wrapper after being criticized for smoking; grasping a cactus with her bare hands, neurotically twisting as blood seeps between her fingers while her mother swears at her continually; and, when her mother sets her up with a man, sending vulgar messages to scare him away.

Ironically, mother Ji also has two faces: among neighbors and friends, she is polite, helpful, and well respected; but in front of her daughter, she becomes emotional, acerbic, and cruel. When she hurts her daughter again and again, it’s clear that she knows what she is doing. “I have never seen a person as shameless as you!” she tells Guo in one scene—and means it. 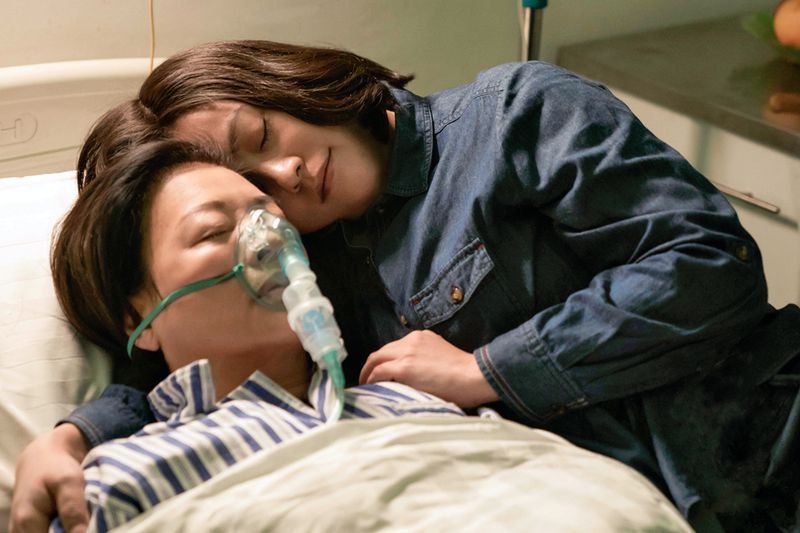 The daughter, Guo Jianbo (Hao Lei), and her mother Ji Minglan (Jin Yanling) in a scene at the hospital

It takes courage to portray hatred and cruelty between family members, and it’s even harder to outline a probable reason. Ji’s hostility toward her daughter is complicated and paradoxical: Ji doesn’t accept Guo as her family, and complains about her daughter living in her apartment, because she believes a woman at Guo’s age is supposed to be married. Concurrently, there is Ji’s troubled relationship with her own mother when she was young and her resentment over an unhappy marriage, which resulted in the daughter who inherited the surname of her husband, the man Ji believes had destroyed her life.

“Every family has a pair of invisible hands, shaping everyone’s personality. It’s very hard to change,” says actress Hao in an interview with Douban, arguing that the family in the film is a snapshot of Chinese society. It’s hard to say whether the tragic circle would be broken. Guo, to some extent, fails to become a good mother as well—her sensible daughter, with whom she has a close relationship most of the time, resents Guo’s frequent absences due to work deep down, and prefers the moody grandmother.

The character of Guo’s father is the most interesting of the movie, though he never appears on screen. Just like in the famous Japanese movie Rashomon, the characters have conflicting memories about him. According to Ji, her husband is a pervert who was arrested for exhibitionism and sexual assault, but Guo remembers him as a gentle father whose wife reported him to the police and taught their daughter to hate him. The movie (spoiler alert) never reveals whose testimony is true, and, unlike most family films, has no “hug and release” resolution. Instead, a seven-minute monologue by Guo indicates that she may be trying to let go of the past, but could also signify that nothing will change.

It isn’t a flawless film: Spring Tide is rated 7.2 out of 10 on Douban, which is above average but unspectacular. There are critics who take issue with the different accents used by three actors playing members of the same family, and others who find the storyline too unfocused to follow. Fans, though, have rallied to the film’s defense: “If you don’t understand the movie, it only means that you are lucky enough to have a happy family.”

It’s so quiet. When you’re quiet, the world is also quiet. Let’s just stay quietly like this for a while. If you wake up, you’ll start swearing at me with the dirtiest, most vicious words you can find. You always say I’ll get my comeuppance. What kind of mother says that to her daughter? What is it that you think I deserve?

ONCE UPON A BITE

Director Chen Xiaoqing, whose A Bite of China took the nation by storm in 2012, returns with a second food documentary series that expands the subject matter to delicacies around the world. From the sausages in Guangdong to white asparagus in France, shrimp noodles in Suzhou to barbecued lamb liver in North Africa, the documentary draws parallels between the world’s diverse food cultures and examines the relationship between human and cuisine. With outstanding cinematography and narration, this mouthwatering culinary world tour is now in its second season and available to view on Tencent Video for free.

An entry in the “We Are One” online international film festival, which took place from May 29 to June 7, Sisterhood was shot in 2016 by Macau director Tracy Choi. Sei (Gigi Leung) lives a seemingly uneventful life in Taiwan with her husband, despite an alcohol problem. After hearing of the death of her former best friend Ling, she decides to return home to Macau. The journey brings back old memories of the 1990s, before the former Portuguese colony was transformed by casinos and hotels, when the young Sei (Fish Liew) and Ling (Jennifer Yu) worked together as masseuses and formed a close bond that was eventually torn apart by a misunderstanding. Back in the present day, Sei discovers a secret that was kept by Ling and suppressed in her own memory.

A dead body, with its throat slit open, is found in a theater. Though the stern detective Chen Weikun (Nie Yuan) suspects the victim’s stepson Xu Feng (Xin Peng), he cannot make an arrest without evidence, and is forced to watch Xu leave town. A decade later, a mysterious Dr. Wang Dong (Luo Jin), who startlingly resembles a bystander at the crime scene, appears on Chen’s radar, as does a dissolute Xu. With sumptuous visuals and sound effects, Ash was tailor-made for the big screen, but had to premiere on Youku.com in late June due to cinema closures during the Covid-19 pandemic.

In this grassroots rural black comedy, Jia Youquan (Yao Anlian) takes out a bank loan to open a village restaurant. To attract customers, he attends and gives out cash gifts at a series of family banquets, weddings, and birthday parties. Soon, his balance runs low, his wife ends up in the hospital, he takes out another loan, and hatches a plot to avoid the debt collector—by faking his wife’s death. After the funeral feast, though, things get out of hand. Available on iQiyi, the film satirizes the custom of elaborate gift-giving still prevalent in many parts of China.  – LIU JUE (刘珏)

Maternal Instinct is a story from our issue, “High Steaks.” To read the entire issue, become a subscriber and receive the full magazine. Alternatively, you can purchase the digital version from the App Store.