Sounds of the City

Sounds of the City

Jin Yuqin had had enough. Trapped inside her apartment during the Covid-19 pandemic and forced for weeks to listen to the constant whine of an electric drill from downstairs, the 64-year-old retiree woke up to the noise one Saturday morning and decided it was time to confront her neighbor.

Having lived in the same apartment complex in Beijing’s Chaoyang district for over 20 years, Jin had always gotten along well with her neighbors. This changed in late April of this year, when the family downstairs began to remodel their home. Every weekday, the noise began at 8 a.m. on the dot, and continued until almost 6 p.m. except for a short lunch break at noon.

“During the daytime, no matter what I did, I couldn’t escape the noise. It made my head ache and my heart beat faster,” Jin complains to TWOC. Until that recent Saturday, though, she had never had any grounds to complain, since the family didn’t violate Chinese law—which permits renovations on residential housing Monday to Friday from 8 a.m. to 12 p.m., and 2 p.m. to 6 p.m.

All across urban China, noise pollution is becoming a serious health and environmental hazard. According to a 2017 report by German company Mimi Hearing Technologies, based on statistics collected by the World Health Organization, Guangzhou suffered from the worst noise pollution among 50 surveyed cities in the world. Beijing ranked sixth, followed by Shanghai at 12th, and Hong Kong at 17th. 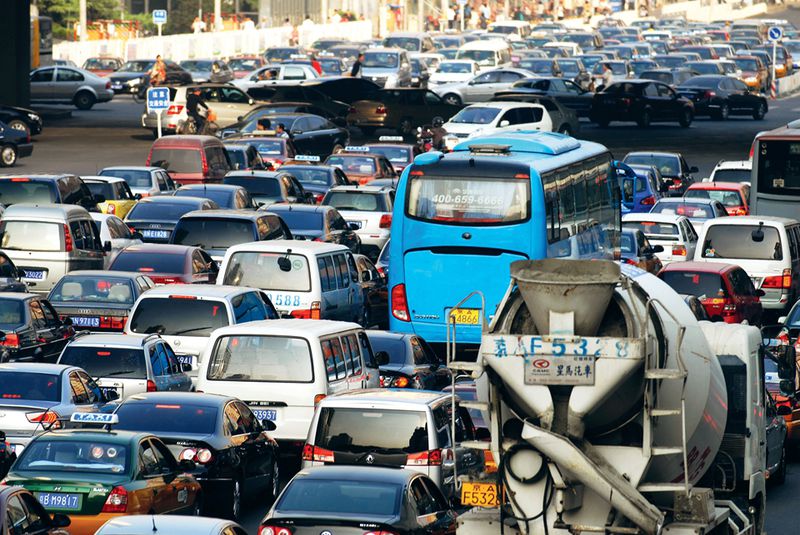 According to China’s Emission Standard for Community Noise, which was drawn up by the Ministry of Environmental Protection in 2008, the noise level in urban residential areas must be lower than 55 decibels in the daytime, and below 45 decibels at night. The WHO recommends an even lower daytime maximum of 50 decibels—anything above that makes people “moderately annoyed.” The WHO Regional Office for Europe states that outdoor noise of above 42 decibels is disruptive to sleep, and above 50 decibels can lead to heart attacks.

Yet even by China’s relatively lax standards, nighttime noise levels exceeded legal maximums in residential areas of over 25 percent of Chinese cities in 2016, according to statistics from the MEP. In all 28 provincial capitals and four provincial-level municipalities, the proportion was over 40 percent.

Nationwide, environmental protection departments at all levels of government received over 522,000 complaints about noise in 2017; 50 percent of those concerned construction work, while 36 percent were related to social activities. Around 10 percent had to do with industry, and 3 percent to do with transportation.

Though noise pollution, like air and water pollution, is one of the world’s major environmental problems, its harmful effects are perhaps less well understood. The German report suggested strong links between environmental noise and hearing loss, finding that, on average, people in the noisiest cities had hearing abilities that were 10 years “older” than those in the quietest cities. The hearing level of Guangzhou residents was estimated to be 17.4 years older than their real age.

Environmental noise pollution has been linked to higher risks of heart attack, stroke, cardiovascular disease, high blood pressure, and high cholesterol. It has also been found to impair children’s cognitive skills, such as reading and memory, and double the risk of depression and anxiety.

Tian Chunlai, a 52-year-old resident of Liaoning province, has been battling noise pollution for 16 years. In 2004, Tian moved into an apartment close to the high school that her daughter attended, and the problems began: The building was next to a busy street, with traffic noises day and night. One block away was a plaza where neighbors gathered to exercise and dance to music every evening, and the building next door hosted a KTV bar that often operated late into the night. 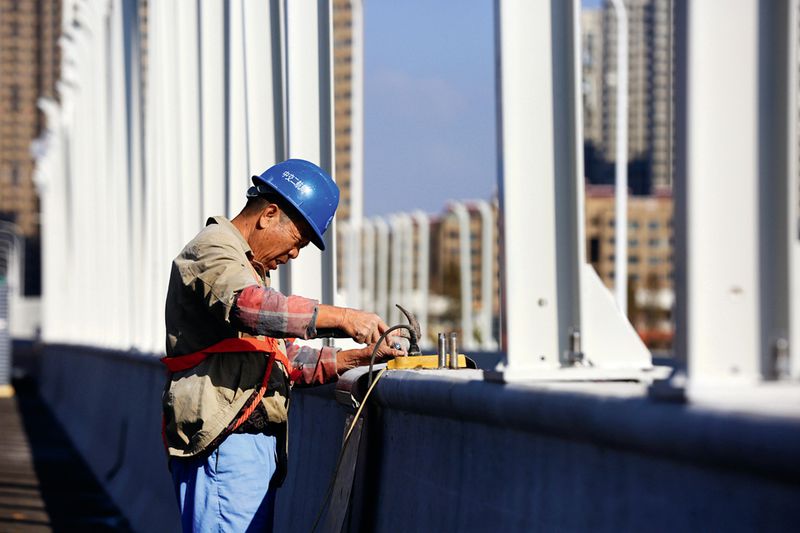 Tian feels that her quality of life suffered from the noise. “In the first few years, even the kids upstairs would often practice the erhu [two-stringed fiddle] at home,” she tells TWOC. Her sleep quality, which was already poor, declined drastically, and she had to keep the windows closed even during the hottest days of summer.

Zhao Bing (pseudonym), a 32-year-old white-collar worker in Shanghai, finds the noise in the subway to be the most unbearable. “The noise of the train and the sound of people drive me crazy every day,” she says. “Sometimes, you may meet people who play music or video on their phone out loud.”

According to joint guidelines from the WHO and the US Environmental Protection Agency, exposure to noise of 100 decibels for 90 minutes is enough to put one at risk of hearing impairment. But in 2019, when journalists from the Beijing Evening News conducted noise tests in Beijing’s subways, they found that the noise on five of the busiest commuter lines could rise up to 110 decibels, and rarely fell below 90 decibels. Like many young people, Zhao relies on headphones to block out the outside noise, which also puts her hearing at risk.

But neither Zhao nor Tian had ever considered reporting the problem to the authorities, as they find the process too cumbersome, and would rather avoid conflict. “Would the government stop people from exercising in the square or singing in a KTV?” Tian wonders.

In China, making a noise complaint is a complicated and often unrewarding task. Responsibility for managing noise is diffused among several government departments. This often leaves complainers confused about where to go, while making it easy for authorities to push the issue off on another department.

Noises from “social” activities, including home renovation and KTV, are handled by the public security bureau. Public noises, such as promotional broadcasts played on a sidewalk, are also managed by the PSB, but are in practice usually dealt with by urban management officers, or chengguan. Industrial and public construction noise falls under the purview of environmental protection bureaus, and traffic noise must be reported to the traffic police. 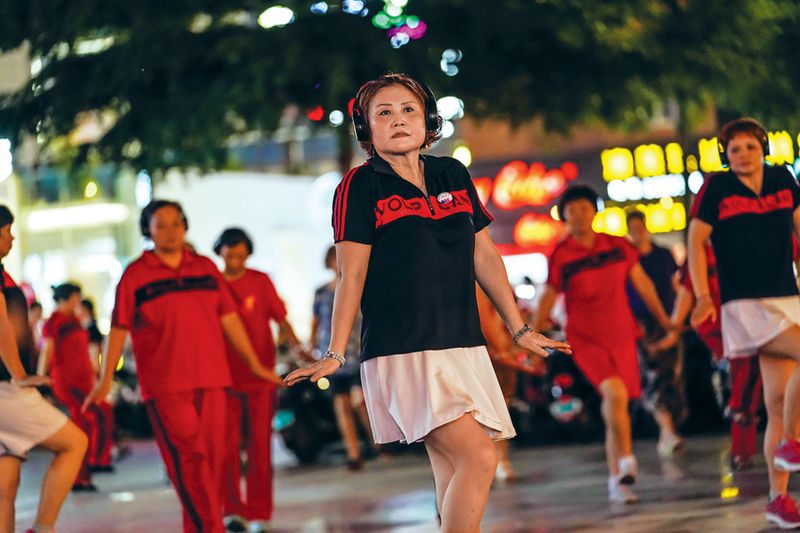 According to Chinese law, people who violate noise standards and disturb others will first be given a warning. If they fail to change their behavior, they will be fined between 200 and 500 RMB. In reality, though, the authorities seldom take coercive measures against noisemakers.

In May 2013, a Changsha citizen surnamed Zhou reported dancers in the square in her apartment compound to the local police station, but the police redirected her to the environmental protection department. The following November, after months of unsuccessful negotiation with the authorities and her compound, Zhou sued the police for negligence.

The police felt this was unfair. An officer told Xiaoxiang Morning Herald that his department had talked to the “square dancers” many times, and gave them a warning, but most were seniors “who just wouldn’t listen.” After Zhou won her case, the police simply moved the dancing area 100 meters away.

“The laws are binding on business activities, but often useless for dealing with individual residents,” Zhou Wang, associate professor at Nankai University’s Zhou Enlai School, tells TWOC, stating that residential noise complaints are too common and there are not enough administrative resources to deal with them all. “The reality is, sometimes you call [the emergency response number] 110, but the police won’t come at all.”

Many urbanites have taken matters into their own hands—and made things worse. In 2016, a Nanjing resident surnamed Liu installed a “ceiling shaking machine” (a gadget available on e-commerce platform Taobao, priced from tens to hundreds of RMB) in his own apartment in retaliation for the constant running noise made by the children upstairs. The family upstairs counterattacked by hitting their floor with a hammer. The dispute continued until local police came to mediate.

Disputes over noise have sometimes escalated to extremes. In 2019, a man in Liuzhou, Guangxi, stabbed a noisy couple next door to death. In 2017, residents of Jiaoling, Guangdong province, beat up the owner of a oil-extraction workshop and destroyed his loud machines. In 2016, a young man in Dongguan, Guangdong, smashed the music player of dancers in his neighborhood square, leading to a brawl which required the police to intervene. Between 2012 and 2013, fed-up neighbors in Changsha, Hunan, pelted a group of square dancers with feces on three separate occasions. 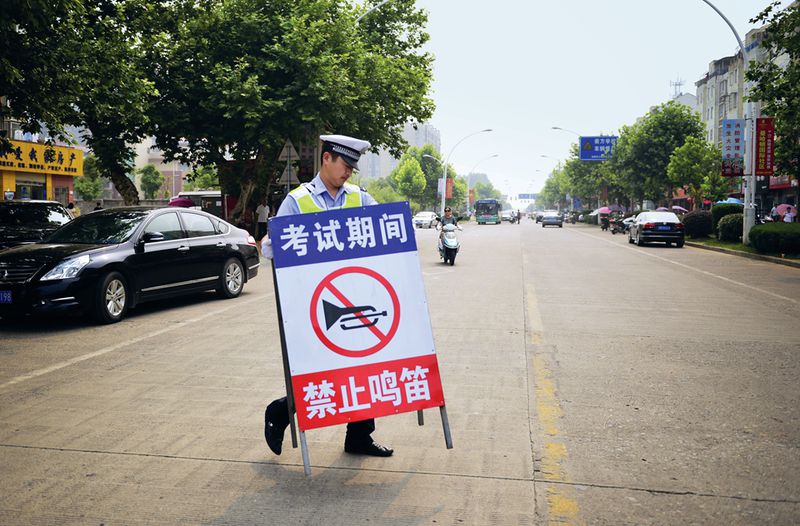 Horn-honking is banned near most gaokao examination sites

In Zhou’s opinion, China’s cities are simply too young, and are not yet modernized enough for residents to have developed good awareness of their surroundings. “Many people still lack experience living in a city and have no sense of regulation,” he says. “They don’t have a concept of privacy or personal space.”

Rapid urbanization has also resulted in a glut of construction projects, which are another major source of noise pollution. “It’s said that from 2008 to 2016, any spot in an urban area was either under construction or slated to be constructed,” says Zhou.

Yet Zhou believes urbanization is not solely to blame for noise pollution, pointing out that Chinese cities are no denser than other East Asian metropolises, where the noise problem is less severe.

Rather, China’s noise-proofing infrastructure still lags behind. “In the central areas of cities, there is still a large number of aged and run-down communities, where almost no sound-proofing materials or designs are applied. Residents in these places suffer more from noise,” says Zhou, explaining that buildings constructed in the last decade are much better insulated against noise due to higher-quality building materials.

Zhou is hopeful about a promise that Premier Li Keqiang made in a government report this May to upgrade 39,000 old residential compounds nationwide by the end of the year. This will lead to better public facilities and add venues for community activities, which Zhou believes can help with the noise problem. “Only when new technologies are developed can the situation really improve,” he says.

These assurances, though, do little to comfort residents who are suffering from disturbances now. Though her neighbors were polite, and promised to never again do construction on the weekend, there is little Jin can do to preserve her peace during regular working hours. “Living in a city like Beijing, there are so many people, so many buildings, and so many vehicles,” she laments. “It’s noisy everywhere, and no one can control anyone else.”

She can at least look forward to a temporary relief in the near future—during July’s National College Entrance Examination, or gaokao, which has been delayed one month due to the Covid-19 pandemic.

The pressure-filled annual exam demonstrates that China is aware of noise problems, and is even willing to tackle them on specific occasions, though it almost goes overboard: In order to provide a better environment for students to study and rest, most cities require construction work near the exam sites to be suspended during the gaokao period, or risk heavy fines. Drivers are not allowed to honk their horns, and even the notorious “dancing grannies” in the square are under strict instruction to shut off their stereos.

But Tian says this is just a temporary fix. “The exam lasts for two days, and after that, the young people will celebrate the whole summer by partying at home, gathering in restaurants, singing at KTV at midnight, and setting off firecrackers,” she says pessimistically. “It will be even worse than before.”

Sounds of the City is a story from our issue, “High Steaks.” To read the entire issue, become a subscriber and receive the full magazine. Alternatively, you can purchase the digital version from the App Store.