As the auctioneer’s hammer sounded again and again, the two Chinese government representatives knew they had lost. Arriving at Christie’s auction house with merely 30,000 USD in cash—not even enough to afford the starting price for a single item—they were forced to watch as collectors from around the globe snapped up nearly 240,000 pieces of Qing dynasty (1616 – 1911) porcelains from a shipwreck in the South China Sea.

Although the Dutch East India Company ship Geldermalsen, which sank in 1752 en route from Nanjing to Amsterdam, had been discovered in international waters, there were no international laws at the time prohibiting the sale of its artifacts. The auction of this “Nankin Cargo,” salvaged by the notorious British treasure hunter Michael Hatcher, took place as planned in 1986 in Amsterdam despite China’s protests, and the Chinese were powerless to get the artifacts returned, short of purchasing them. 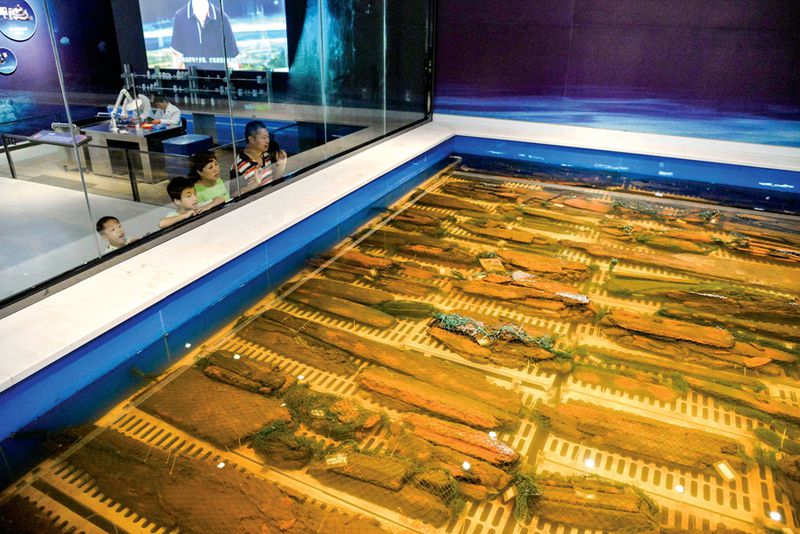 The embarrassment over the auction (which supposedly netted Hatcher some 20 million USD in returns) is often considered the catalyst for the birth of China’s maritime archeology program, now considered by many experts in the field to be among the best in the world. Just one year after the auction, in 1987, the central government established the Underwater Archeological Research Center within the National Museum of Chinese History (now the National Museum of China).

Many geopolitical strategists believe China’s push into underwater archeology coincides with the government’s assertion of territorial claims in the South China Sea, noting that many of China’s maritime archeological sites are located in the far-flung Xisha Islands. By 1989, the laws regarding ownership of artifacts were already expansive, with the country laying claim to all cultural relics of Chinese origin found on the high seas.

In the current decade, as the Belt and Road Initiative takes a more prominent role in China’s foreign policy, underwater archeology has seen a boost in government support. In Geocultural Power: China’s Quest to Revive the Silk Roads for the Twenty-First Century, scholar Tim Winter notes that the government’s efforts to revive the legacy of the Maritime Silk Road advance “a narrative of redemptive civilizational grandeur; the idea of China as a great power that secured its wealth and respect via ocean-based commerce and peaceful diplomacy.”

When maritime archeologist Bill Jeffrey arrived in Fujian province’s Dinghai Bay in 1990 to help train China’s first underwater archeologists, a program planned in partnership with Australia’s University of Adelaide, he admits that he didn’t have much of a clue about the politics behind the scenes. He only saw that his 15 students, who had been selected on merit from museums across China, had a difficult time transitioning to the program, noting “while land archeology is theoretically the same as maritime archeology, there are a lot of practical challenges that they weren’t yet ready for.”

Though the students were trained in diving by the Chinese navy, Jeffreys remembers difficulties teaching them how to operate the boat and pumps by themselves, as well as how to gear up correctly to breathe underwater. “It is something different to go from excavating on land to excavating in cold, black water, where you cannot see 30 centimeters in front of you,” he tells TWOC. “China’s water conditions were difficult even for someone like me, who had experience.” 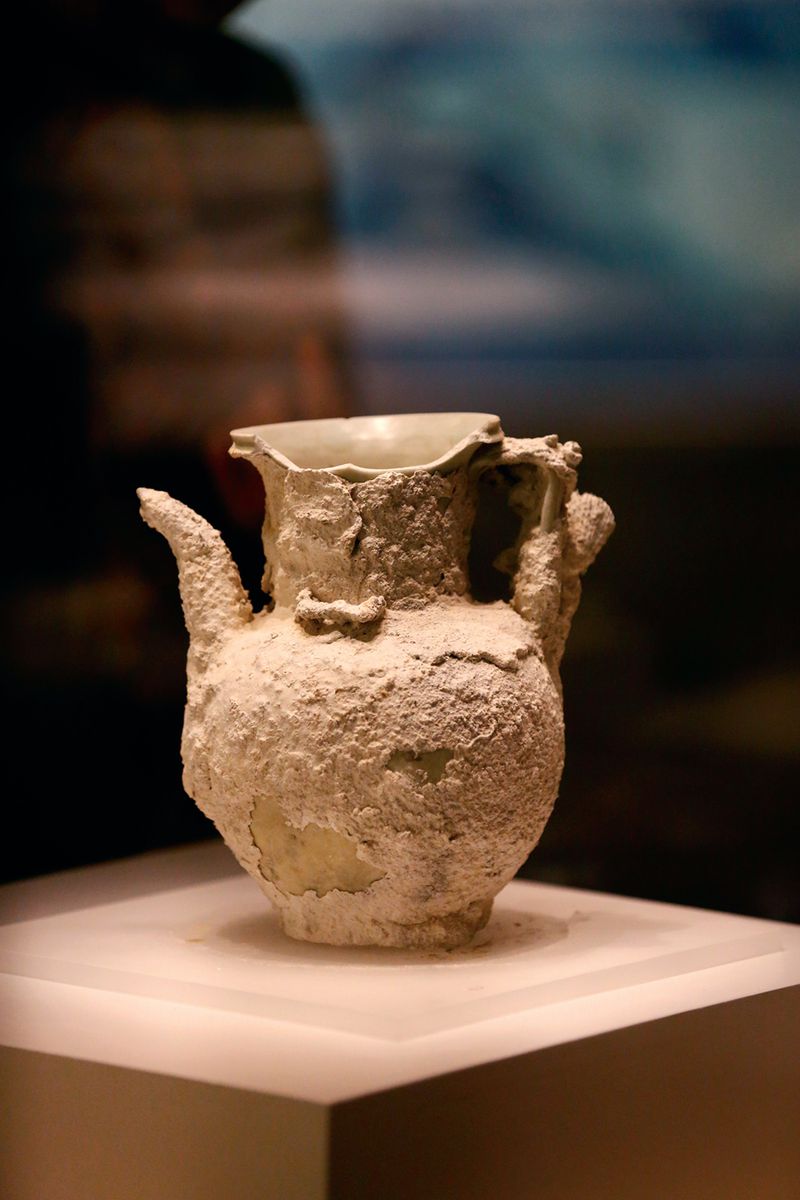 While an underwater excavation needs substantially more capital, resources, and expertise to organize than a dig on land, Jeffrey notes that maritime archeology often renders better artifacts. Historian and archeologist John Miksic, from the National University of Singapore, agrees, noting that “underwater sites preserve organic materials very well, unlike those on dry land where only durable materials like stone, metal, or pottery survive. On ships we can often see what was stored in jars.”

Having supervised doctoral students in maritime archeology from China, Miksic is enthusiastic about the government’s investment into this little known academic field, which gives additional insights into economic and societal trends in history. “Business records from ancient times are almost never preserved, so ships give us excellent data on the nature of early commerce,” he says. “We can also study the lives of the lower class of the population, through the ships’ crews, who are never recorded in historical sources.”

Uncovering these lost histories was also the inspiration for Li Zhao’s work. As the director of the South China Sea’s Underwater Archeology Research Center at the Hainan Provincial Museum, Li has lost count of the number of dives he has conducted since his first shipwreck in 2007. “Throughout its history, China has been a country that has looked to the sea,” he comments poetically. “Studying shipwrecks allows us to develop an understanding of how ancient China interacted with the world.”

Li spends months each year on ships on China’s seas. “When I get on a boat, it is like someone else putting on shoes; it is the most basic part of my day,” he says, laughing. Growing up in the landlocked city of Chongqing, Li had always loved swimming, but didn’t even know that such a job as an underwater archeologist existed.

Now, as he looks for future recruits for the program, one of the most important qualities he looks for is a love for being in the water. “It isn’t like the salary of a maritime archeologist is very high; you have to do it because you love it,” he says. 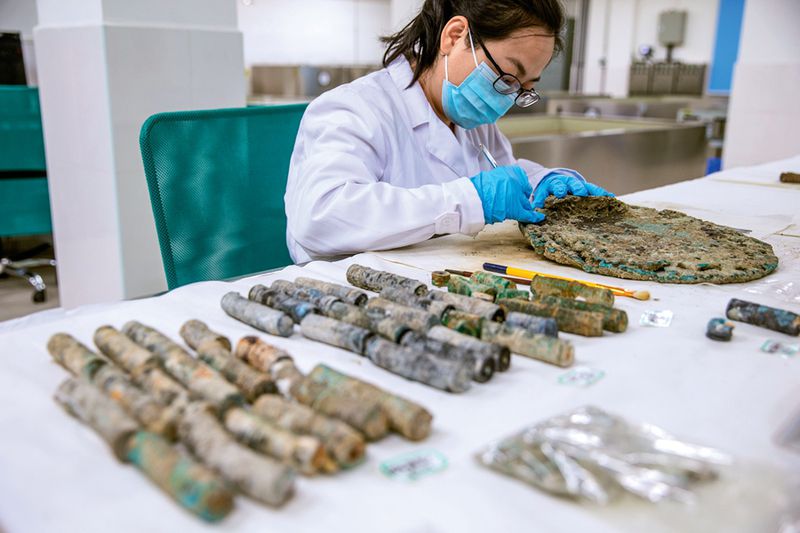 China now boasts over 100 maritime archeologists across the country, who dive in diverse locations ranging from the muddy coast of Shandong province to the freshwater Poyang Lake in Jiangxi. Besides being excellent swimmers, recruits must also have an academic background in history. Chao Fei, one of the Hainan center’s researchers, says each underwater archeologist ends up developing a specialization based on a dynasty and artifact type.

Chao’s expertise lies in Song dynasty (960  – 1279) porcelain, and he is even able to name the kiln that fired some artifacts simply by looking at the shape, glazes, and designs. “But when I went for my first dive in 2008, I couldn’t tell the difference between a rock and an artifact,” he jokes. He plans to return to the Xisha Islands this year to continue working on a shipwreck that was discovered in 2018, and says he enjoys diving in the South China Sea because of the clearness of the waters and shallowness of many of the shipwrecks.

While these conditions certainly make things easier for the researchers, the ease of access also attracts looters, who often destroy historically valuable artifacts as they dig around for the most commercially profitable ones. Zhang Wei, the deputy director of the National Museum of China, has noted that many porcelains that come up in overseas auctions still have seashells attached to them, a sign that they had been taken from underwater sites illegally. 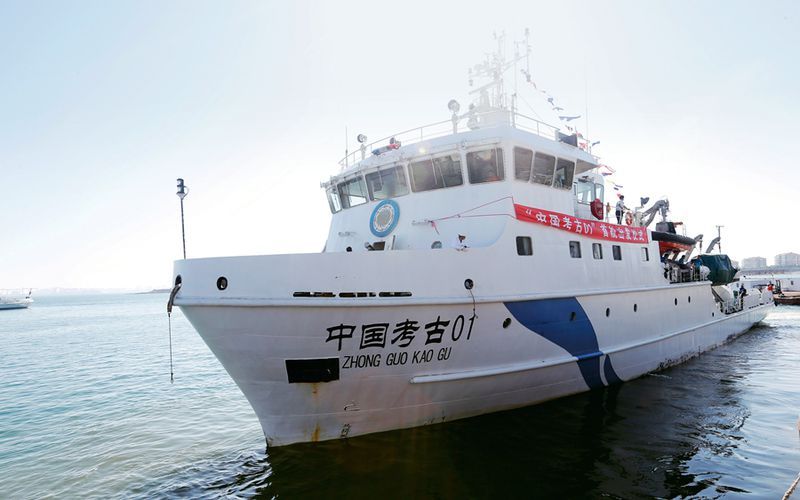 Archeologists spend two to three months a year at sea

According to Li, a team of excavators will usually spend two to three months each year at a site for up to three years for a large shipwreck, based on weather and water conditions. When archeologists are not onsite, looters try to take advantage.

In an interview with Archaeology magazine in 2011, police officer Zhu Zhixiong described his efforts to organize round-the-clock patrols of the Nan’ao I shipwreck off the coast of Shantou, Guangdong province. Besides convincing local fishermen to give up the artifacts they had taken to sell for much needed income, Zhu often found himself chasing down professional treasure hunters on the open water. “You can’t sleep if you want to protect our heritage,” he commented.

“No other country in the world has put in as much dedication or resources into the development of underwater archeology as China has,” Jeffrey tells TWOC. However, he notes that most of China’s enthusiasm and efforts in the field comes from the central government, whereas other countries also see strong community support from local governments and universities, national parks, and historical preservation societies. 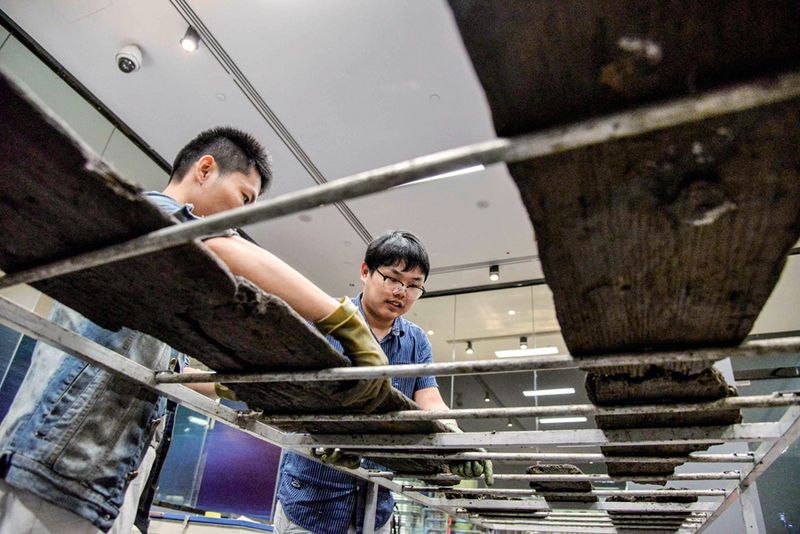 Pieces of the ship must be kept in a controlled environment

Substantial state support has allowed China to become a leader in the field from a technological standpoint. The launch of the Jiaolong-01 in 2010 made China the fifth country in the world to send a manned submersible deeper than 1,000 meters. However, China’s crowning maritime achievement is without doubt the discovery of the Nanhai I, a Southern Song dynasty (1127 – 1279) merchant ship that is now housed at the Maritime Silk Route Museum on Hailing Island in Guangdong, the largest underwater archeology museum in the world.

“The Nanhai I shipwreck project is the largest of its kind: the recovery of a complete shipwreck intact and its excavation in a controlled environment,” Miksic enthuses. “No other country has ever invested such a large amount of resources in an underwater archeology project.” The ship was raised from the murky ocean floor in 2007 through a custom-built crane system that placed the boat and some of the seawater into a “steel shoebox.” The shipwreck was then placed into a glass facility at the museum dubbed the “Crystal Palace” and opened to the public in 2009.

“I am hoping that China will invent some new processes which will lead to the preservation of wood, rope, and other materials without fundamentally altering their properties,” Miksic says, explaining why the Nanhai I is still submerged in water. “Organic materials dry out when they are exposed to oxygen, and the cells of wood and fibers then begin to shrink and decay. This is the key problem for underwater archeology.”

Besides new technologies, Miksic is hopeful that China’s focus on the Maritime Silk Road might allow for partnerships between China’s teams and his excavations in Indonesia and other parts of Southeast Asia, many of which are filled with Chinese artifacts. “Underwater archeology is a very expensive form of research. International cooperation, especially with poorer countries in Southeast Asia and Africa, would be very beneficial,” he says, suggesting it might boost China’s image abroad to help fund such research in developing countries. 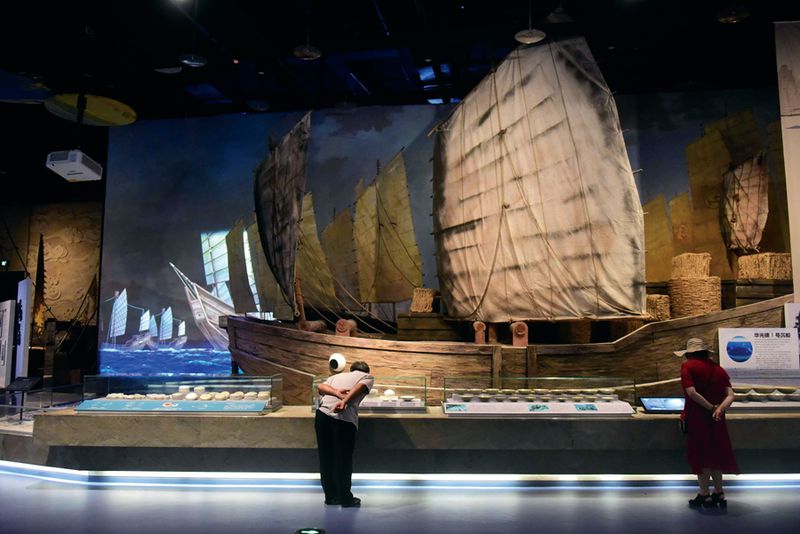 One of the biggest barriers to international cooperation is language. In 1990, Jeffrey could only communicate with his students through an interpreter, and is even now only able to speak with a few of his Chinese colleagues in English. Miksic notes that most reports about China’s maritime discoveries have only been published in Mandarin, and there is a dearth of Chinese underwater archeologists at international conferences.

Even though each shipwreck can render thousands of artifacts, most of the excavated objects seem destined for the plethora of domestic museums popping up in provincial capitals and regional cities, rather than traveling exhibitions that could reach foreign audiences in overseas museums.

In spite of the seemingly insular nature of China’s maritime archeology, though, Li is enthusiastic about the future. “With every new discovery, we are getting more and more experience,” he says, stating that his team has discovered Chinese, Arabic, and Indian ships along the Maritime Silk Road. “These were businesspeople from all over the world. We are discovering the history of international trade. The next natural step is to share our expertise with teams abroad.”

Under the Sea is a story from our issue, “High Steaks.” To read the entire issue, become a subscriber and receive the full magazine. Alternatively, you can purchase the digital version from the App Store.