When hundreds of netizens posted this welcome message in November 2018, it was not to hail the arrival of some beloved athlete or celebrity. Instead, they were celebrating the return of a 3,000-year-old vessel, looted in 1860 and kept abroad for over 100 years.

This ying vessel, now stored in the National Museum of China, is just one of an estimated 17 million Chinese artifacts believed to be in private collections or public displays in over 200 museums overseas. Many were lost during wartime, or smuggled out by unscrupulous traders, often working in cahoots with tomb raiders.

According to veteran archeologist Sun Ji, ying were traditionally used to hold alcohol, which was burned along with spices during the ancient sacrificial ceremonies of the Western Zhou dynasty; no more than eight are known to exist, and the Tiger Ying, named after leaping casts of the jungle cat that decorate its lid and spout, is believed to be the most intact, with a four-character inscription, “self-made ying,” carved inside its lid. As Sun told China Daily, “The vividly portrayed tiger sculptures and exquisite patterns are also incomparable.” 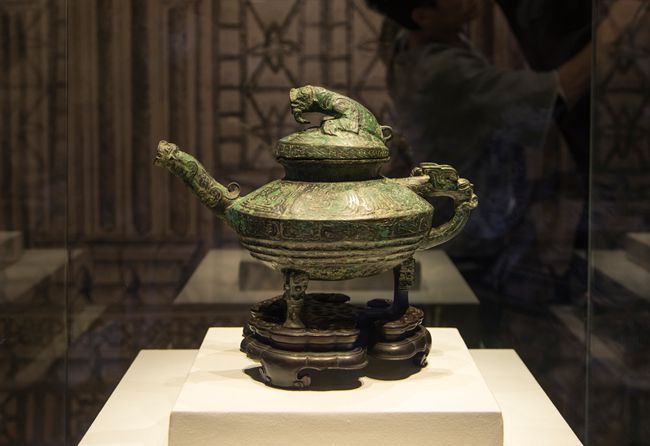 The 3,000-year-old Tiger Ying is now in the collection of the National Museum of China

In 1860, when the Old Summer Palace, an imperial garden of legendarily exquisite design on the outskirts of Beijing, was ransacked and burned down by Anglo-French forces, the Tiger Ying was grabbed by Royal Marines captain Harry Lewis Evans, and entered the private collection of the Evans family.

Over 150 years later, in April 2018, the Tiger Ying appeared in an auction catalog by Kent’s Canterbury Auction Galleries in southern England. The vessel was accompanied by letters, written by Evans, which authenticated the find, recording the robbery explicitly: “I went out on Thursday with a party to burn down the Summer Palace…The temples were enriched with quantities of the most beautiful bronzes and enamels, but were too large and heavy to be moved conveniently.

“I succeeded in getting several bronzes and enamel vases that will, I hope, some day find their way to Southsea, as well as some very fine porcelain cups and saucers of the Emperor’s imperial pattern,” Evans continued, “but they are so dreadfully brittle that I quite despair ever being able to get them home in their present condition. I have, however, packed them up very carefully.”

The discovery of the letters triggered outrage back in China. Though the Chinese government strongly protested the vessel’s sale, its auction proceeded, and was finally won by an anonymous buyer at the price of 410,000 pounds (3,631,000 RMB) on April 11.

Then came a dramatic—though not unfamiliar—twist: On April 28, the National Cultural Heritage Administration (NCHA), which had previously been working to repatriate the artifact, received a message that the mysterious buyer wanted to donate the Tiger Ying to China. 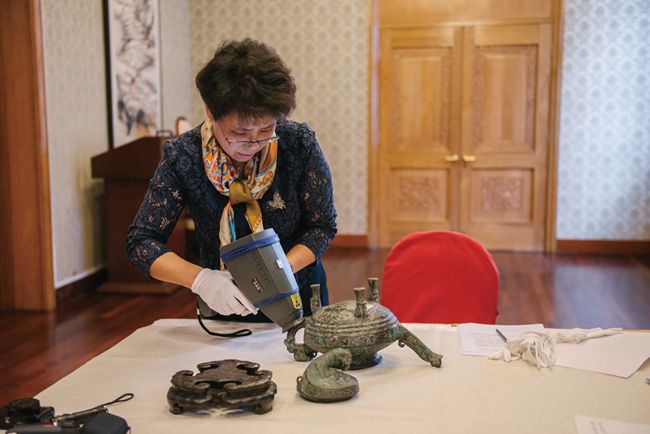 The NCHA, the Chinese Embassy in Britain, and the National Museum quickly began preparing a plan to bring the item home. In September, experts from the museum traveled to Britain to further authenticate the artifact, noting that the vessel showed characteristics of Western Zhou bronzeware from its shape, sculpture, and inscription.

After identification, NCHA representative Wu Min signed a confirmation receipt with the auction house, and on September 23, the ying was returned to China’s custody, remaining in the Chinese embassy until it was moved to Beijing in November. On December 11, the Tiger Ying was officially transferred to the National Museum for a handover ceremony.

“Its journey back home is a milestone in our efforts to repatriate lost treasures from overseas,” director of the NCHA Liu Yuzhu commented at the handover ceremony. “It fully shows our responsibility to protect our country’s cultural heritage, and may contribute more wisdom about handling similar issues.”

In March this year, China and Italy announced an agreement for the latter to return over 700 cultural relics, a move that came amid renewed calls for more historical artifacts to be returned to their countries of origin.

Last November, France gave 26 artworks back to the West African nation of Benin, and China has been particularly robust in using its political clout to demand that items looted during conflicts such as the Opium Wars be recognized and returned. The UK returned about 3,000 smuggled artifacts to Beijing in 1998. Since then, there have been several high-profile returns: two bronze zodiac animal heads, also taken from the Old Summer Palace, from France in 2013; and 361 antiquities, seized by the FBI in 2014 during a raid on an Indiana farm, sent back from the US earlier this year.

“There are museums the Western world over that are full of artifacts which were acquired under dodgy circumstances, going back,” Hong Kong University Professor Quentin Parker told CNN in March. “China has had so much of its cultural wealth destroyed and also stolen over centuries, and especially over the last few decades, so it’s trying to make a stand.”

According to the China Cultural Relics Academy, over 10 million artifacts were illicitly taken between 1840 and 1949. Now, as many are coming home, the NCHA’s Liu has remarked: “The loss and return of Chinese cultural relics are closely connected with the fall and rise of the nation.”

A Relic’s Return is a story from our issue, “Funny Business.” To read the entire issue, become a subscriber and receive the full magazine. Alternatively, you can purchase the digital version from the App Store. Raiders of the Lost Art

For China’s tomb robbers, an ancient business is still booming A “protected” Hakka village is gradually being abandoned to the elements