Concubine Yang Guifei of the Tang dynasty, one of the “four great beauties” of ancient China, was accustomed to a life of intrigue—yet a posthumous discovery involving the controversial imperial beauty puzzles archeologists to this day.

In 757, the year after Yang was executed for her supposed part in the An Lushan Rebellion, the remorseful Emperor Xuanzong ordered her remains to be relocated. According to the Book of Tang, although her exhumed body was badly decomposed, her “perfumed pouch” (香囊) remained in virgin condition.

For centuries, historians were mystified: How could an accessory made of silk and stuffed with fragrant herbs remain unblemished atop a rotting corpse? The answer would remain buried for 1,213 years, until a construction dig outside Xi’an struck gold. 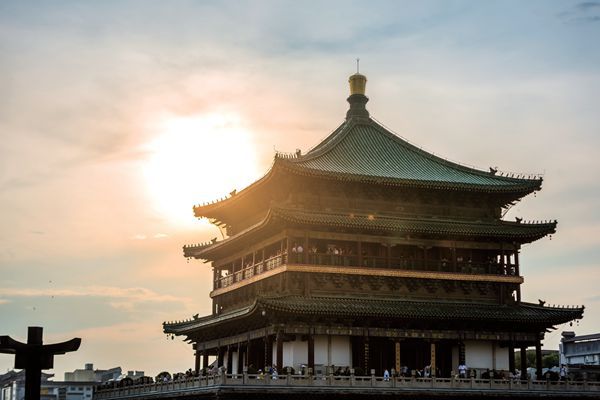 In 1970, workers digging an emergency shelter in Hejiacun village unearthed a large pot filled with gold and silver. A further excavation also revealed exotic coins; minerals such as cinnabar, stalactite, amethyst and litharge; and artifacts made of agate, crystal, jade, and amber.

In total, over one thousand pieces of some of the most remarkable and best-preserved Tang relics ever discovered were unearthed in the village—and the treasures became known as the Hejiacun Hoard. Historians deemed the site to be atop the former Xinghua Quarter, a neighborhood popular among the Tang imperial family and high officials in the capital of Chang’an.

One baffling object was a small silver sphere on a chain. Examining the hollowed half-spheres on twin axes, archaeologists classified it as a portable spice burner. Textual cross-references suggested that an object like this was the late Concubine Yang’s “perfume pouch”—not a silken bag as generations had assumed—explaining why it hadn’t decomposed after a year in the ground. 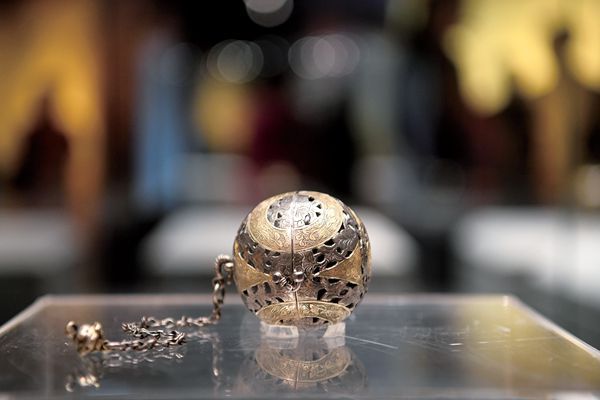 Silver censer with open-work design of flying birds and grapes

This was the beginning of many twists in the fate of the Hejiacun Hoard. In 1970, the Cultural Revolution’s destructive campaigns against ancient relics and academic institutions had just cooled off, and journals reported the astounding archaeological discovery (though all were careful to note that it “revealed…[how] the exploiting class squandered the wealth created by the working people”).

The following year, a grand public exhibition of cultural artifacts, including many key pieces from the Hejiacun Hoard, was held in the Forbidden City museum. Henry Kissinger was among its first foreign visitors during his two-day trip to China. By 1973, the treasures had been shown in 16 other countries, helping rehabilitate China’s image after nearly a decade of cultural vandalism.

After the Beijing exhibition, Mao Zedong’s wife, Jiang Qing, apparently took special interest in a golden bowl carved with lotus and mandarin ducks, and organized a private viewing. While this bowl safely returned to the collection, other items were not so lucky. Staff reporting to work at the Shaanxi History Museum in September 1975 found a broken window and 14 items missing from the Hejiacun collection. The lost treasures included six intricate gold dragons, believed to be used for Daoist rituals. Despite decades of investigation, these items have never been recovered. 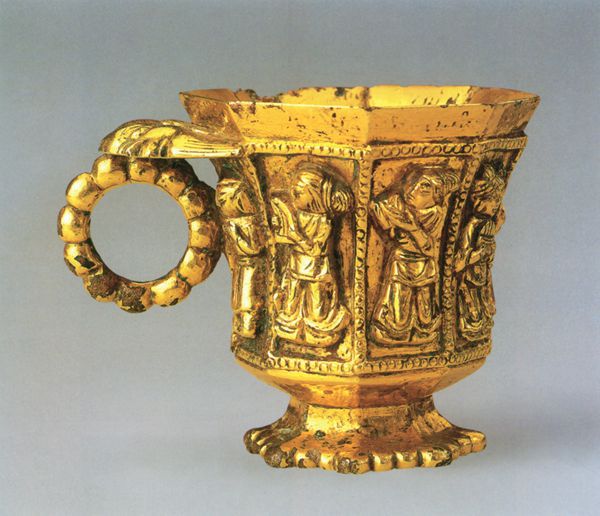 However, perhaps the biggest mystery surrounding the Hejiacun Hoard is the identity of its original owner. Scholars suggest that a political crisis may have precipitated the hasty interment of the trove, but when—and by whom—remains a source of popular speculation.

One theory was that prince Li Shouli, Emperor Xuanzong’s first cousin, buried the treasure at his residence around 756 before fleeing the capital during the An Lushan Rebellion. There is some evidence that Li had a mansion in the area, but no direct evidence linking him to the treasures.

In 2003, Peking University archaeologist Qi Dongfang proposed another theory. He noted that 10 sets of jade belts, issued to high-ranking officials, were among the treasures, along with silver tokens marked as tax collected for the national treasury. Each artifact was marked by name, weight, and number, suggesting systematic management. Qi’s theory was that a local tax officer named Liu Zhen had either tried to smuggle out the collection, or protect it by burial, when rebels threatened the capital during the Jingyuan Mutiny in 783.

Whatever the truth of the Hejiacun Hoard’s origins, it remains a remarkable capsule into the glories of a past millennium. Chang’an formed the easternmost point of the Silk Road and hosted an assortment of foreigners including Persians, Arabs, Turks, Uyghurs, Tocharians, Sogdians, and Japanese. The treasures included Persian silver coins, Byzantine gold, and a silver cup carved with Sogdian musicians. A 900-year-old gold-tipped agate rhyton (drinking gourd) shaped like an antelope’s head was the first of its kind to be recorded in China.

Unearthed in one of the most turbulent periods of modern Chinese history, the treasures are reminder of the wealth that could be found in one of the world’s first metropolises—and may have more secrets to yield yet about this pinnacle period of imperial culture, craftsmanship, and technology.

Treasure Trail is a story from our issue, “The Good Life.” To read the entire issue, become a subscriber and receive the full magazine. Alternatively, you can purchase the digital version from the App Store.