Love, war, and trade along the China-Myanmar frontier

“It was love at first sight, you know?” Nang Khan Sar giggles shyly as she cleaves a watermelon open with one swing of her knife.

At Nang Khan Sar’s roadside fruit stand outside of Ruili in Yunnan province, across the town of Muse, Myanmar, the border is an imaginary line in the fields—without fence or sign, but increasingly potent as the Chinese government seeks to control migration and trade in an ethnically diverse region.

But the border was no match for love. “We met last year during the Water Pouring Festival,” Nang Khan Sar explains of meeting her husband Ai La Wen during the New Year festivities of the Dai people, who live across southwestern China and Southeast Asia. “Everyone goes from village to village dancing. That was when we saw each other.”

Nang Khan Sar is a Myanmar citizen, Ai La Wen is a citizen of China; both are of the Dai ethnicity and grew up along the shores of the Ruili River that comprises the city’s border between China and Myanmar.

Along China’s 503-kilometer border with Myanmar in the Dehong Dai and Jingpo Autonomous Prefecture, dozens of ethnic groups have thrived where “the sky is high and the emperor is far,” as the saying goes. For millennia, family clans have walked across this mountainous belt freely for market days, marriage, and festivals.

Compared to the main touristic hubs of Yunnan such as Dali or Lijiang, Ruili, one of several border towns in Dehong, is not known for its naturalistic visas—its river is muddy, and its hills are distant. However, travelers willing to endure hours of winding mountain highways to reach the remote town are rewarded with Ruili’s border culture: Bustling jade markets, colorful ethnic minority festivals, and Burmese residents walking to-and-fro sporting thanaka, a yellow-white facial paste made from ground tree bark. The city at first glance resembles most regional urban centers in China, with its malls, parks boisterously full of dancing aunties, massage parlors, and coffee shops. But look closer and you will find betel nut stains on the sidewalk, mohinga noodles on many corners, and even China’s first Myanmar-language cinema. Head even a few kilometers out of the city, and there are towns inhabited by people of the Dai, Jingpo, Lisu, and Deang ethnicities, where the cycles of life ruled by harvests and festivals remain largely untouched by Ruili’s sprawl.

Ruili has always been a crossroads. It was once known as the Dai kingdom of Mong Mao, and the first ruler of modern-day Ruili can be traced back to 568 CE. The Dai are part of a larger group called the Tai-speaking peoples that includes some 93 million descendants today, including the Thai of Thailand, Lao of Laos, and Shan of Myanmar, many of whom migrated south from Yunnan due to political instability over 1,000 years ago.

The Dai kings were conquered in 1259 by the Yuan dynasty, whose Mongol emperors, loathing the humid southern climate, happily let the Dai elite administer the region from afar. In 1388, however, the Ming dynasty led a military campaign that destroyed a Dai army of 100,000 soldiers and 100 elephants. The Dai were gradually incorporated into the Chinese empire, and the last Mong Mao kings were extinguished in the 1600s. 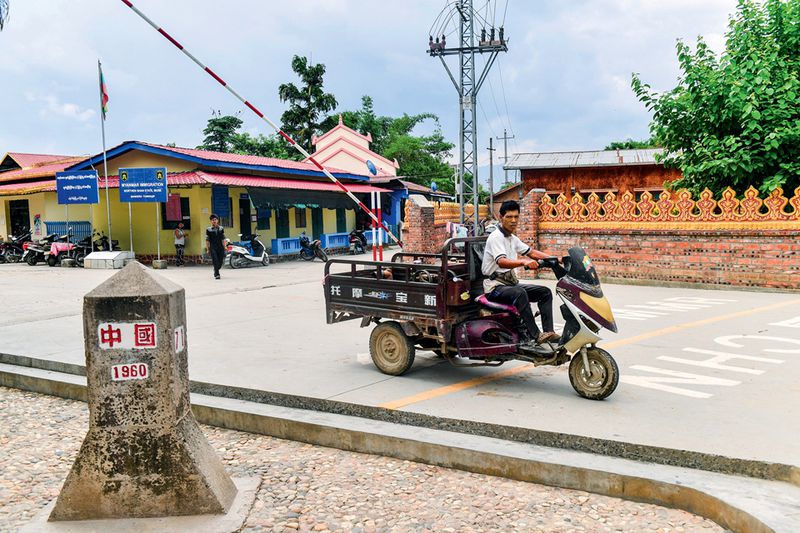 Today, a glowing vestige of the Mong Mao era is the Jiele Great Golden Pagoda, seven kilometers outside of Ruili. A Dai stupa of 17 golden conical towers, its main tower is nearly 40 meters high and paved in golden ceramic tiles. As for centuries, monks clad in orange robes host ceremonies on Theravada Buddhist holidays. Hundreds of bells tied at the top of the tower create a soundtrack of distant tinkling on a breezy day.

A few kilometers south along the Ruili River, Han Sha, the 48-year-old chief of Nongdao village, has something to say of Ruili’s constant pace of change. Sitting in the yard of his traditional wooden Dai-style home, he explains that for much of his lifetime, the border has been relatively porous, with populations fleeing in both directions to escape political persecution.

“In my parent’s generation, our side was messy. Now that side is messy.” Han Sha’s parents had fled from Ruili to Myanmar’s Shan state during the Cultural Revolution after being labeled as landlords. His elder sister was born there, but the family returned to Ruili in the 1970s.

In the last decade, fighting in Myanmar has come within 10 kilometers of his home. Ruili sits at the edge of Shan and Kachin states, where pro-independence ethnic groups have been embroiled in decades-long conflicts with Myanmar’s armed forces. Artillery shells have flown across the Chinese border and damaged buildings, and the violence continues to send tens of thousands of people fleeing across to Ruili for shelter. 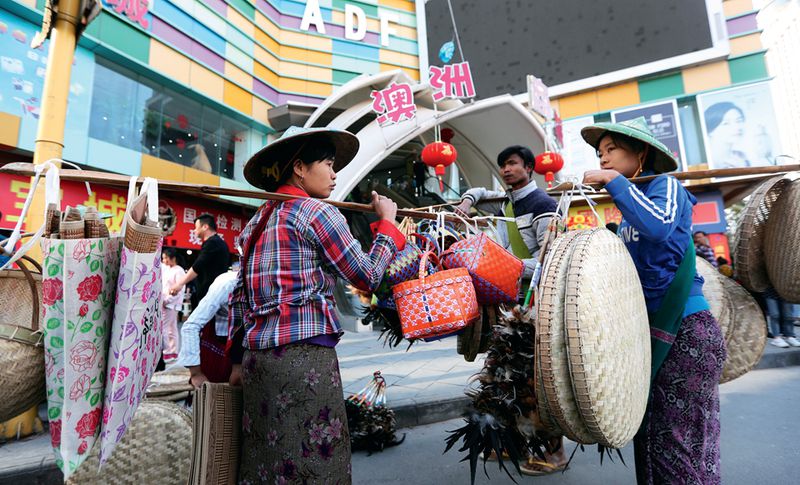 Ruili’s diverse population of Han, Dai, Jingpo, and other ethnicities hpe to bring cultural tourism to the city

In the last 20 years, China has gotten serious about border administration. Formerly paperless residents on this frontier have been issued state ID cards. Some women from Myanmar who married into Han Sha’s village were given Chinese citizenship. Citizens have access to public healthcare, as well as a monthly stipend of 600 RMB for no other reason than living on the border—a straightforward way to drum up governmental goodwill.

In Han Sha’s youth, only bamboo rafts and wooden boats crossed the Ruili River. Today, 1,500 trucks rattle over the Jiegao Bridge every day. Some continue to the Indian Ocean, where their cargo boards ships for Africa and Europe. On a good day, the crossing is a cacophony of rice, cattle, and timber heading north, and farming and fishing machinery, fertilizer, and mobile phones heading south.

At the Jade Market in the thrumming heart of downtown Ruili, traders and travelers from around the world are drawn by Ruili’s most famous import: “Are you spending a fortune on jade in your home city? Have you been ripped off before? Get it here cheap, in the jewelry capital of the world!” a seller shouts. 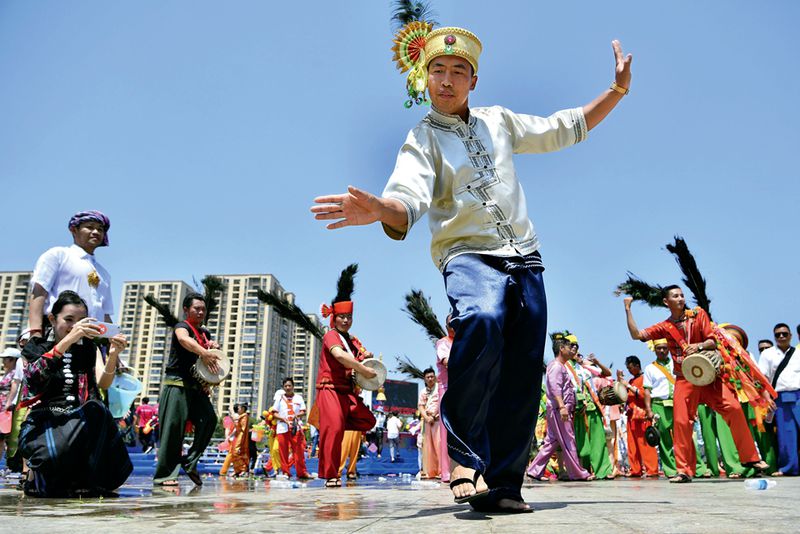 Over 90 percent of the world’s jadeite is mined in Kachin state; Ruili is the closest Chinese trade port to the mines, and China is the market for largest jadeite in the world. In Ruili’s warehouse-like jade markets, flashlights dart over rows of the precious stones, glinting white, dark green, and amber. The jadeite can be found embedded in silver and gold rings, shaped into laughing bodhisattvas, and carved into flat buttons popularly known as “peace knots.” When the vendors pour out their inventory, the polished clinking sounds like rain.

The market aisles clamor with Chinese tour groups from further inland, as well as Bamar and Rohingya jade processors from Myanmar rubbing shoulders with Chinese traders from Guangdong and Fujian province. All up and down the supply chain, the jadeite trade seems to be fostering international and inter-ethnic collaboration where politics have failed: Kachin and Shan from Myanmar work as suppliers, Dai and Jingpo Chinese as shop owners, and Rohingya and Bamar as cutters and polishers. Han Chinese, however, still control the largest jade companies.

Many enterprising folk from Myanmar, looking to get a taste of larger profits, come to Ruili themselves to learn Chinese language and the trade, benefitting from a bilateral policy for passport-less travel within Ruili’s border zone. Others come for the sheer fact that they can double their incomes even just by working in fields or factories. The Ruili city government counts 50,000 citizens of Myanmar working in the city—but some estimate another 35,000 undocumented migrants who do not show up for their weekly check-in at the border control department. One Village, Two Countries is a theme park on the border featuring Dai architecture

Over a steaming bowl at one of the Yunnan rice noodle shacks that dot the highway, a Chinese farmer slurps his breakfast with toppings of spicy bean curd and fresh lemongrass. Leaning over from the next wooden table, he tells of how it’s not unusual to drive a pick-up truck across unpatrolled mountainous roads to bring an entire Myanmar family over to work on their plantations, with little protection from the elements and even less protection from the law.

“We’re in big trouble this year because of the virus, though,” he sighs. “The border is so strict now, nobody can get over.” He mumbles about watermelon rotting in their fields.

Not only do people defy borders—pineapples do, too. The border itself is the theme of the sprawling “One Village, Two Countries” theme park, a bucolic Disneyfied Dai town bisected by the border 12 kilometers south of Ruili. Here, families from the Myanmar side sell fruits to the tourists by slinging over a long bamboo pole with a plastic bag. Tourists insert cash, before it is drawn back to the Myanmar side. The Ruili River forms a natural international boundary, with 10,000 people crossing each day by bridge

The park’s other attractions are tinged with non-ironic zeal: Visitors can try the “One Swing, Two Countries” ride (“With a gentle swing, you can go abroad in an instant!”). Not far from this is “One Temple, Two Countries,” and even “One Rock, Two Countries”—a boulder that has apparently witnessed the “storied growth of Chinese-Myanmar friendship.”

Driving back toward town, I wonder: What is the border? A political fabrication? A force that guides trade, investment, and conflict? A line across which people flee war, and seek fortunes?

Down the road, I stop once more at Nang Khan Sar’s fruit stand, where she is beginning to close up for the day. With watermelon juice dribbling down our chins, she shows me her wedding pictures: In one set, the bride and groom are dressed in traditional Dai-style clothing, and hold hands in front of a red bamboo umbrella. In another, Ai La Wen is in a purple suit, lying on the grass with his head on Nang Khan Sar’s lap. She leans down to touch his nose, beaming.

It is clear that when the newlyweds look into each other’s eyes, the border is nothing at all.

Borderlands is a story from our issue, “Disaster Warning.” To read the entire issue, become a subscriber and receive the full magazine. Alternatively, you can purchase the digital version from the App Store.