A guide to Hangzhou for avian enthusiasts

While much of the biodiversity of the past has made way for skyscrapers and Hangzhou’s myriad ancient architectural wonders, the city remains one of the most popular cities in China for bird watching. Birders come from all around the world to see Hangzhou’s resident avian species as well as those making their long journey from Siberia to Australia—finding in Hangzhou, as many travelers do, an oasis of biodiversity.

Birders at the Lake

Normally, birders find themselves having to travel far outside the major cities to sate their appetite for avian voyeurism, but this is not the case with Hangzhou. West Lake itself provides for a keen look at the more adaptable birds that make their journeys from the North; there’s also the fact that the lake’s wide berth and central location makes the area a paradise for birders wanting to catch these creatures in flight over a simply spectacular skyline, edged, depending on the season, with lotus flowers or plum blossoms. 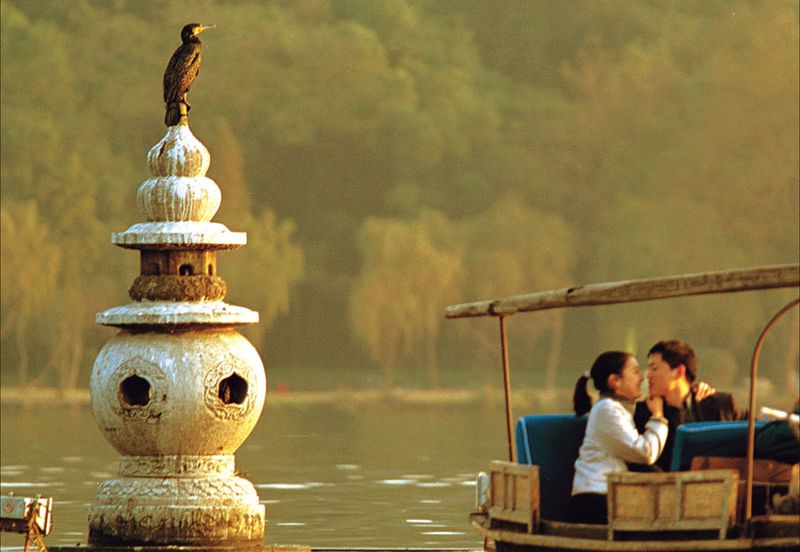 A cormorant rests on top of one of the three iconic stone pagodas of the Three Pools Mirroring the Moon in West Lake; cormorants are one of the most common birds in Hangzhou during the winter

Even here, in the heart of modernity, visitors strain their lenses and binoculars to catch glimpses of the common kingfisher skimming for prey, watch the swift ashy drongo hawking the skies for insects, listen to the inimitable song of the oriental magpie-robin on the wet summer skies, and stumble upon black-throated tits as they wander their way from the Himalayas to the Southeast Asia. All of these birds come, like most of the visitors, for the peace of West Lake—but also the insects.

In the Botanical Garden

While most visitors are drawn to the Hangzhou Botanical Garden by the diversity of flora, this is often the first place birders find themselves after casually strolling West Lake. Located near the many of the other famous tourist locations in Hangzhou in Xihu District, this site boasts a number of birds in a prime location for both amateur and professional photographers.

Bamboo forests near major metropolitan centers aren’t exactly known for their biodiversity, as bamboo can be a bit brutal on the soil below, but there is one species native to this area all the tourists are after: the Chinese bamboo partridge, notable for its ground-dwelling ways and gold-brown plumage.

If you find yourself in the botanical garden, listen for their distinctive, fast, high-pitched squeal, said to sound like ki-ko-kuai. These are one of the most photogenic of the birds in Hangzhou, not least of which because they are largely based on the ground and often travel as a family. If you’ve made them fly (or flush, as it’s called), then you’ve probably startled them. Even the taxonomy of this little bird is interesting, as one of the only two known surviving species of the Bambusicola genus remaining. 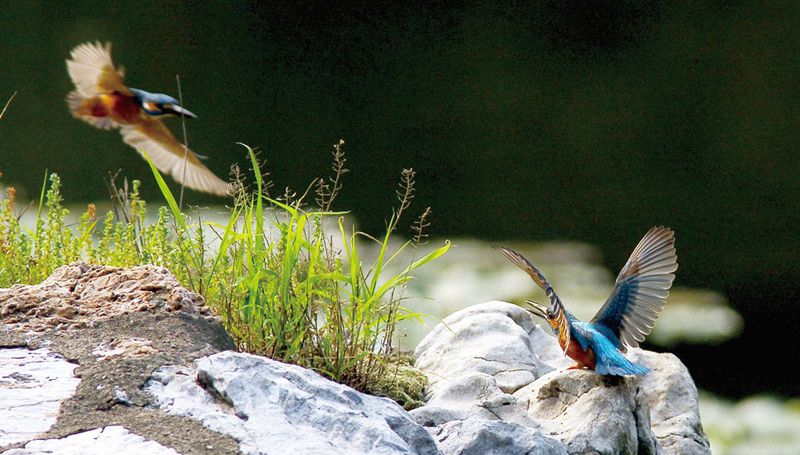 In spring, kingfishers fight for territory in the Hangzhou Botanical Garden

But, that’s obviously not the only bird you’ll find wandering around the botanical garden. The rich diversity of plants provides a haven for birds wanting to avoid the tourists at the surrounding hotspots.

The only real problem birders will find in the botanical garden is that there are so many birds hiding out in places like the azalea forests that you’ll be spoiled for choice. A big treat for bird watchers in the azalea forest is that of the fork-tailed sunbird, a curious little passerine bird with a sharp, curvy bill. The males are extremely brightly colored, so much so that they wouldn’t look out of place in a rainforest, and their call is a metallic chirp that adds a bit of what seems like mystical, tropical aesthetics to this inner-city botanical wonderland.

Now, the West Lake and Hangzhou Botanical Garden are all well and good, but, like most parts of Hangzhou, if you really want a taste of nature, you’ve got to head to the Xixi National Wetland Park. Here, birders from around the world try to catch glimpses of eastern China’s colorful waterfowl in an environment that looks like it was taken out of an ancient novel of mystical waterways and magic boatmen.

Besides all of the extremely active ducks in the area, birders will find themselves drawn to the herons that can be found throughout the area. Unlike the colorful birds one finds in the botanical garden, these herons are largely native and some can rise pretty high on the East China aviary food chain.

While night and striated herons can be found in the Xixi wetlands, the most curious species is that of the Chinese pond heron, a specialized hunter of fish, bugs, and crustaceans around these parts. If you catch them around breeding season, you’ll see that they are a curious blend of reds and blues, but normally it’s their large wings combing the lakes that get birders interested.

These wetland herons are sometimes overlooked in favor of the perhaps more bizarre-looking egrets, a favorite being the Eastern cattle egret—notable for its perfectly white plumage out of breeding season and, some have noted, a yellowish mullet, which we can all agree is a tough look to pull off. The intermediate egret is a regular feature of the waters of the Xixi wetlands—a fairly easy-to-spot species with a long neck that bunches up as it stalks its prey in the shallow waters.

However, chief among all of these bird watching experiences is finding the brown hawk-owl, perhaps the greatest hunter in all of East China. You can find them in the Xixi wetlands using their almost supernatural owl-eyes and hawk-like body to hunt the small rodents inhabiting the shallow, brackish waters. Some areas know the brown hawk-owl as a boobook, an onomatopoeia for this surprisingly pervasive animal’s odd owl hoots.

It is here, in the Xixi wetlands, that the avian diversity of Hangzhou can truly be seen—from the strange songs of passing flocks of laughing thrush to the bright colors of the red flycatchers and yellow-bellied tits—even the most picky nature lover can find something special in the skies and branches of Hangzhou.

Native to East Asia, the Mandarin duck has a special cultural importance in China as a symbol of love and fidelity. They are also the most prominent visitors to West Lake every year from late October to early April; during this time, up to 300 wild Mandarin ducks can be seen swimming and flying over the lake. The best spot to catch a glimpse of these birds is the West Lake Waterfowl Protection Zone west of the Su Causeway. These photos are provided by Zhu Chenzhou (祝辰洲) who has spent 14 years studying the avian life of West Lake. 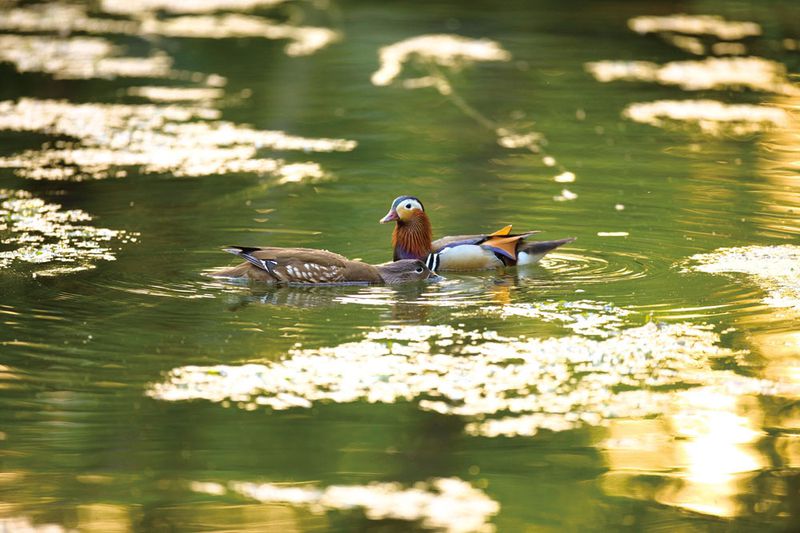 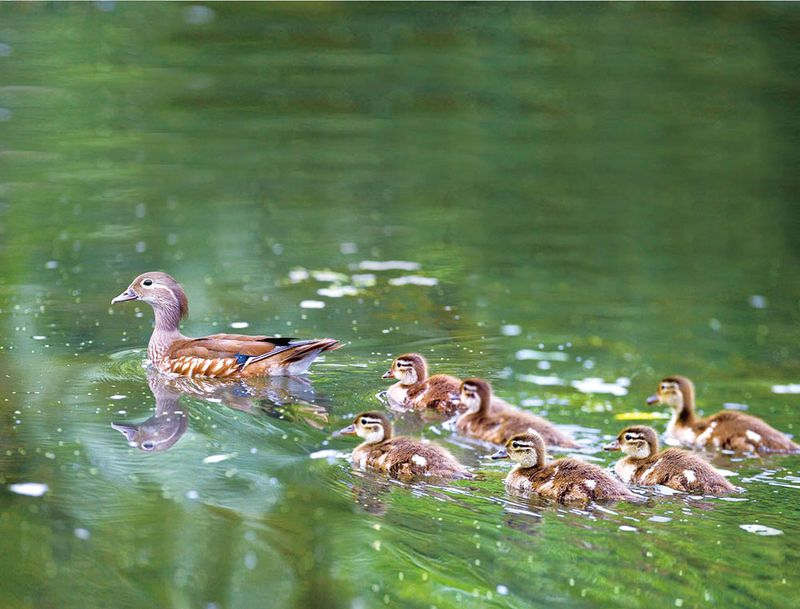 On rare occasions, Mandarin ducks stay in West Lake for the entire summer to raise their ducklings 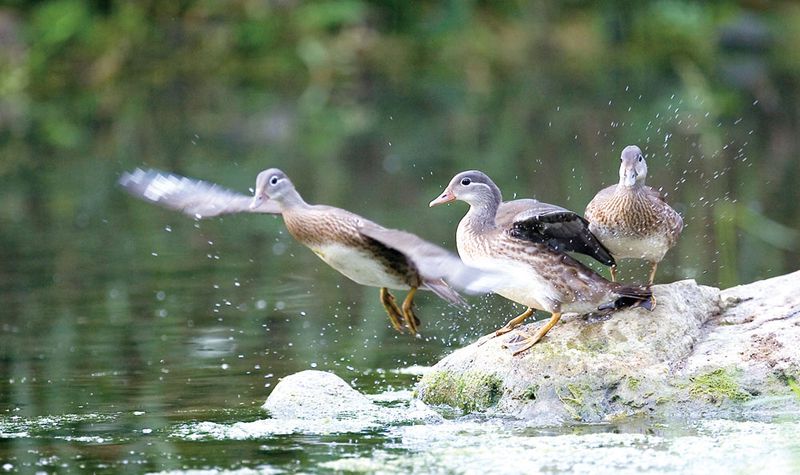 After 40 days of life, baby ducks fly for the first time 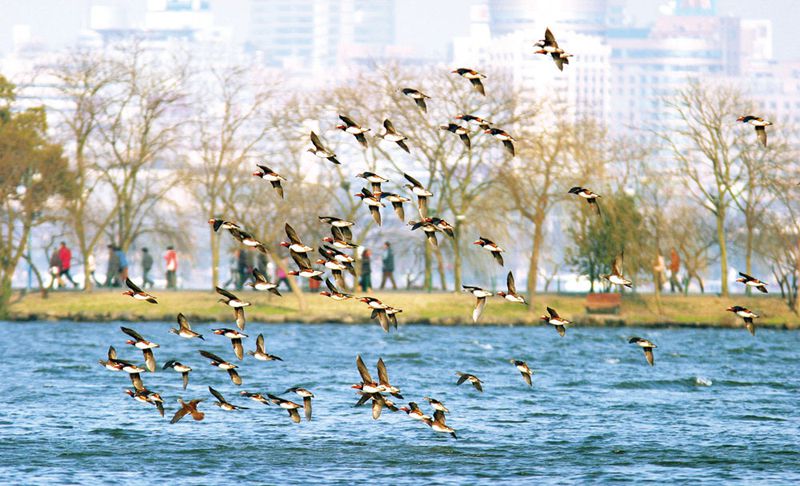 Domesticated Mandarin ducks spend most of their time in water, but wild ones are strong flyers, migrating thousands of miles from the North to the South every year 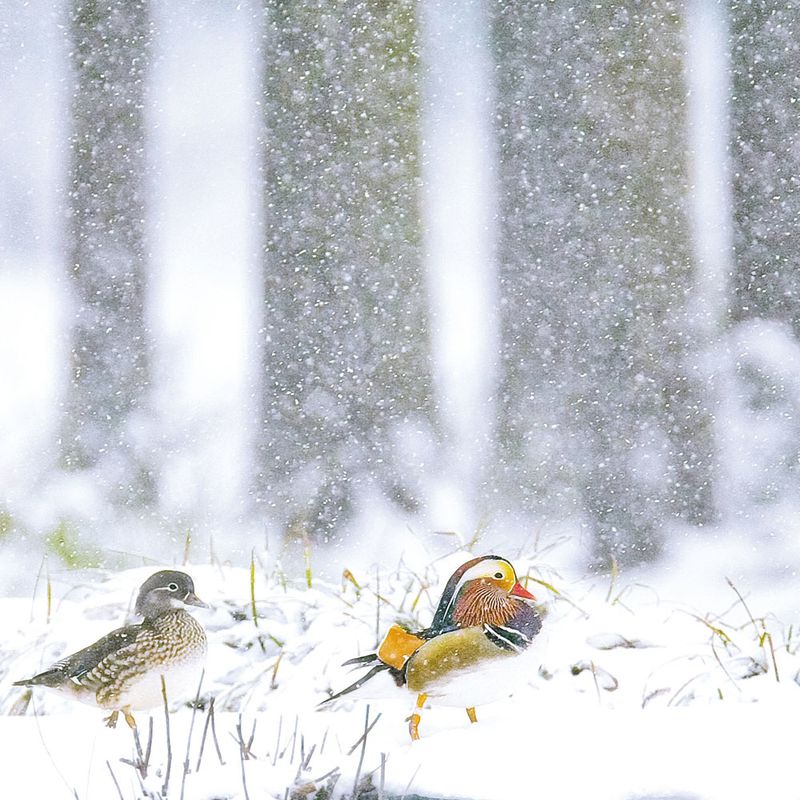 A pair of Mandarin ducks in a rare Hangzhou snow 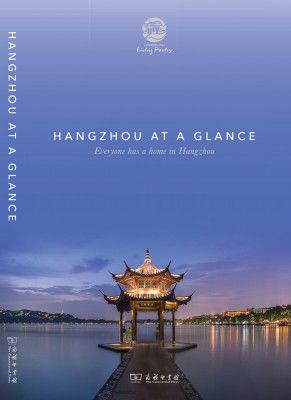