Cyberpunk is alive and well in China

Cyberpunk is alive and well in China

Cyberpunk– a science fiction genre that tends to be defined by high-tech-low-life urban dystopia—is usually set in the not-too-distant future: think The Matrix, ExistenZ or the forthcoming Bladerunner 2049.  But the mainland release of Ghost in the Shell on April 7—a film based on a 1989 anime series originally inspired in the landscapes of Hong Kong—has placed the focus back on the Chinese cities of today, rather than the Japanese setting of Bladerunner‘s tomorrow.

The Scarlett Johansson adaptation, meanwhile, features glimpses of both Hong Kong and Shanghai, where the film was partly shot. With its economic strength on the increase, it’s perhaps not surprising that some argue that China will oust Japan from its cyberpunk top spot, along with its GDP output — if it hasn’t already.

Some characteristics of post-cyberpunk, such as adhering to a tech-led society’s order rather than defying it, and seeking ways to live in the corrupt system rather than exploiting it, can be found in Chinese-inspired cyberpunk. Middle Kingdom cities have helped artists imagine a world where a high-tech-low-lifestyle dominates many peoples’ lives.

Ever since cyberpunk originated as a genre in the 1980s, it has looked to Japan’s technological and economic primacy during that decade. Asian cities like Dehli, Kuala Lumpar and Shenzhen have since become epicenters of technological development with attendant problems like pollution, drug-addiction, corruption, and other characteristics of a low-lifestyle. Such depictions have prompted a debate among netizens over the use of Chinese characters when these dark and cynical societies are fictional.

On the other hand, Chongqing, a steamy metropolis in Sichuan province, infamous for its Machiavellian politics, is one of many examples of cyberpunk reality. A main tourist attraction is a monorail that passes through a residential building — echoing themes of forced development — and the city inspired Tim Franco’s Metamorpolis, capturing the life of Chinese coping with fast-paced industrial progress.

Other Asian cities have served to create an alternative world where technology has reached the inner mechanisms of our hearts. Or at least that’s what Saman Kesh wanted to show with his tech-controlled love story short film Controller, based in Taipei, which is currently in the process to be adapted to the big screen by 20th Century Fox. The film tells the story of a superpower-enhanced man in love of a robot that can control people’s minds.

To say the least, other cities in the country are affected by mass migration led by incredibly fast industrialization, which creates a huge urban underclass of people that has to adapt to the current trends of technology. This homeless for example, begs for a QR code money transfer with a piece of paper. 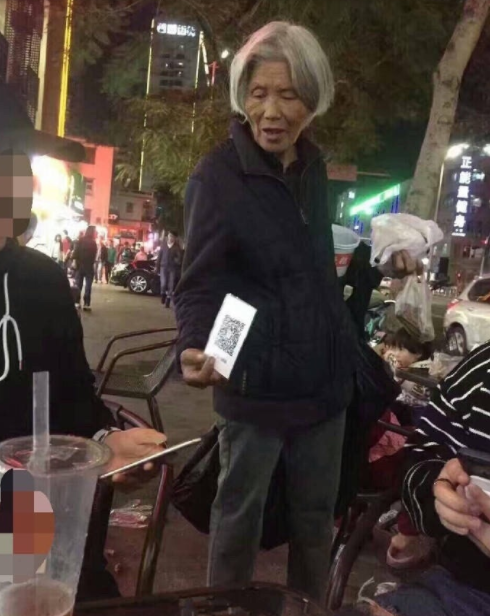 The truth is that China is naturally affecting cyberpunk art – and inspiring other artists – because economic conditions are slowly changing its social fabric. Showing glimpses of a low-life culture in China, a Motherboard reporter described a KTV nightclub in Southern city Guilin (in Guangxi province) as:

“a large, neon-soaked dancefloor with several bars no one pays attention to, served by half-male, half-female crew around the same age … in front of a gigantic plasma TV blaring Korean pop videos. The women are in black tops and skirts, the men are stripped to the waist and near skeletal thin; several are tattooed. All of them are off their heads on ketamine.”

Even though South China is arguably the epicenter of global ketamine consumption and production, this low-lifestyle surrounding drug-addiction and prostitution, among other social concerns, is obviously not true of all Chinese megalopolises (with the clearest exception of Kowloon Walled City in Hong Kong). But segregation and economic discrimination is definitely part of the country’s development. This photographer with more than 95 thousand followers on Instagram has captured some of this social conditions in cities like Beijing.

China continues industrializing and inspiring artists across the world by doing so. Cyberpunk is a mutable — not to mention moveable — beast. The concept of high-tech-low-life has even been adapted to a documentary thanks to Stephen Maing’s film High Tech Low Life, which shows the journey of two of China’s first citizen reporters as they travel and report on the country’s urban affairs, facing censorship regulations and avoiding political persecution.

Just like Maing, Cyberpunk’s legacy is kept alive thanks to other filmmakers, writers, and various artists who are inspired on the Middle Kingdom’s city landscapes, where boundaries between humans and technology are becoming blurrier. The PLA Wants You

The army looks to more modern methods for their recruitment drive