“These people would rather have their children sexually assaulted than let them have sex education. I was sexually assaulted by one relative for three to four years. I knew back then it was wrong, but no one told me how to protect myself. [I] don’t want these angelic children to experience what I went through. I can’t even be too intimate even in a relationship because of the trauma. China has to emphasize sex education. Learning about sex in adult films, isn’t that ridiculous?”

This was just one comment among over 123,888 responses generated in two days by a Weibo post (@浪里赤条小粗林) expressing outrage over the controversial recall of a primary school sex education textbook, Cherish Life. Hangzhou Xiaoshan Gaoqiao Primary School withdrew the book after an irate mother questioned the book’s use of biological terms such as “penis” and “vagina” and frank discussion of issues including homosexuality and child abuse.

Despite being used in sex ed classes for nine years in experimental schools and 18 schools for migrant children in Beijing, the textbooks became the center of a media storm—and immediately sold out.

Online mockery and ridicule spread when Li Tiegen, who runs a comedy account on Weibo with over four million followers, re-posted the illustration on sexual harassment depicting an elder woman asking to see the private parts of a boy. As the picture was taken out of context, many were quick to criticize the legitimacy of the textbook.

Only the bottom  half of the page, titled “Protect Your Private Parts,” was posted online, prompting ridicule from netizens

“Theme One: the Birth of Humans – Conception of Life. Father and mother love each other. Father puts his penis into mother’s vagina.”

Published by Beijing Normal University for primary students from the first to sixth grade, the series was based on longtime study and educational experiment supported by the Ford Foundation. Edited by Dr. Liu Wenli, the textbooks were compiled under the international technical guidance of UNESCO on sex education, covering a broad range of issues from growth and development, sexual health, sexual orientation, gender roles, and social equality. 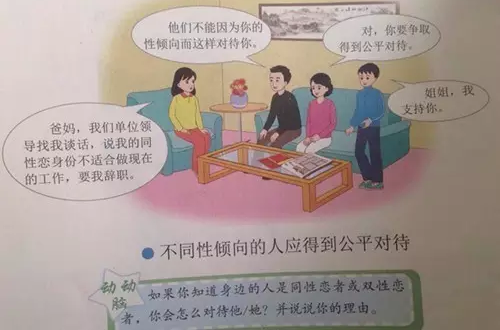 Woman: “Mother and Father, my boss says I am not suitable for my job because I’m a lesbian; he asked me to quit.” Father: “They shouldn’t treat you like that because your sexual orientation.” Mother: “Yes, you have to fight for equality.” Brother: “Sister, I support you.” People of different sexual orientations should be treated fairly: If anyone around you is homosexual or bisexual, how would you treat him/her? Explain.

As pointed out by the editorial team of the textbook, one of their aims is to prevent child abuse. According to data from Chinese organization Girl’s Protection, from 2013 to 2015 there were 1,790 child victims of sexual assault across the country—and these are just cases that were covered by media. Last year saw a 27.35 percent increase in such cases, according to a report released by the China Foundation of Culture and Arts for Children.

Among the victims, 125 were below the age of 7, while the youngest victim was less than 1 year old. Professor Wang Dawei from the People’s Public Security University of China put the real number of child abuse cases as high as seven times the estimates based on media reports. Even this may be a conservative estimate.

These numbers were supplemented by the voices of netizens who opened up about their traumas (TWOC has left account names out to protect their privacy).

“I encountered [was harassed by] my piano teacher when I was a child, my high-school male classmate and gropers in the pool; saw exhibitionists on the street at least twice. When chatting about these subjects, my female classmates all said they had similar experiences. If you think it’s rare, it’s because most girls are afraid of speaking up.”

“I was sexually harassed when I was at the third grade, a man put his hand repeatedly in my pants, but I knew nothing back then. If he hadn’t tried to cover my mouth and nose and I realized something was wrong, it could have been so much worse. You tell me if it’s necessary for primary schools to teach sex education.”

“I am sorry, I can only talk about this on my other account. Because my parents haven’t taught me any knowledge about sex, I was molested by my primary school teacher. I hope more children won’t have to be like me. It is a prick in my heart. [The memory] resurfaces from time to time, making me nauseous. I wrote a lot, but writing about what happened to me is like writing a pornographic novel, so I deleted them all. I only hope everyone can hear the voice of a victim and universalize sex education to protect their sons and daughters.”

The textbook series is currently sold out. The publishing house’s customer support department explains that their printers are working day and night to meet the sudden influx of orders, and the textbook will be back in stock around March 15. I Have an Intellectual Disability, But I Still Desire Sex and Love