Welcome one and all once again to the weird and wonderful world of the Middle Kingdom. Coming up on today’s Viral Week, we bring you law enforcement through the eyes of dogs, an analysis of female drivers, the act of reading making a comeback, and an ice theme park for your enjoyment. But first…

A man in Liuyang, Hunan province, was pulled over by traffic police and given a fine because he was apparently driving a Porsche.

However, this was not some government-mandated vendetta against the German car manufacturers. Instead, it was due to the fact that the vehicle the man was driving was only disguised as a Porsche. Underneath the cosmetic makeup—that apparently cost the man a total of 200 RMB—lay a Chinese Zotye SR9.

The driver was fined 500 RMB for making changes to his car that rendered it different from its registration details.

According to reports, the man’s SR9 set him back around 100,000 RMB while the Porsche Macan (the vehicle it was pretending to be) would cost five times as much. In the past, the German carmakers have looked into the possibility of legal action over Zotye’s car designs due to the uncanny resemblance.

Many of you have probably seen videos online in which an owner strapped a camera to the backs of their pets before leaving the house. Upon returning, they review the footage to see what kinds of shenanigans their animal friends had been up to.

Well, police in Beijing have taken this one step further by utilizing this technology on police dogs. A batch of fifteen terrain-proof action cameras have been fitted onto the backs of police canines. Each camera has a range of ten meters and can transmit live images via wireless internet. On the receiving end will be police officers wearing specially made virtual reality glasses that will allow them to experience what the dog sees in real time.

According to Wang Lei, a police officer, this technology will allow officers to command dogs to complete tasks even when they are not on the scene—though he did not elaborate on what kind of two-way system was installed to allow this feedback loop to exist. Current models of the camera have up thirty gigabytes of storage and can record for six hours on one charge.

Nope. I am actually wrong.

On last week’s International Women’s Day, traffic police in Zhejiang province released posts that informed the public of just how much less accident-prone women are compared to men.

Reporting from statistics collected in 2016, they claimed that although one third of the drivers in Hangzhou are female, they only cause around ten percent of accidents. The city of Wenzhou also produced similar statistics, though they added that female drivers were more likely to scratch their vehicle due to high heel shoes or distraction by their children—whatever that means.

Of course the internet had to share its opinion on the matter, with many raising a skeptical eye and claiming that the statistics may need to be further broken down for significant analysis. Others lamented the fact that the term “drivers” only refer to men and the term “female drivers” is often used to single them out.

READING BACK IN STYLE

Recently, the Chinese TV show Readers《朗读者》has managed to gain all sorts of popularity. The premise of the show is simple: guests (often with some degree of fame) are invited to undergo a short interview, after which they perform dramatic readings in front of an audience.

Although the show has only been on for a month, it has somewhat revived a love of literature among its viewers. Special booths have been set up in major cities in China that allow enthusiasts to read in front of recording equipment. The showrunners then select the best ones to air on their show. 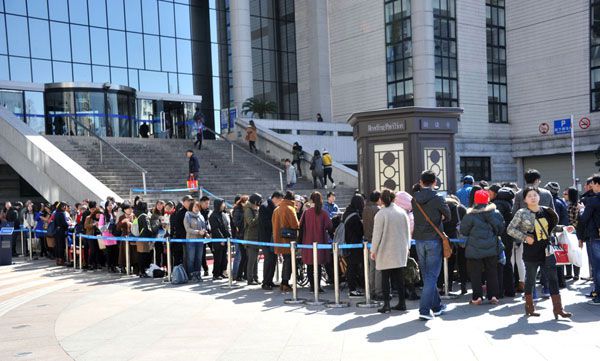 When the first booth opened up in Shanghai earlier this month, over 200 individuals were queued up for their chance to read.

Booths have also been set up in Beijing, Hangzhou, Guangzhou, and Xi’an, so what are you waiting for? Grab your favorite novel and get over there.

A PLACE TO COOL

As we approach the Ides of March, the weather has already begun to warm up. This may come as a relief to many of you, but certain parts of the population may not share your sentiment.

Fortunately, Harbin, the capital of Heilongjiang province and reputed ice-land, has unleashed the Ice-Snow World Theme Park on the people.

Situated inside an inflatable membrane, the theme park takes up 6,000 square meters and promises to maintain a temperature of -7 to -10 degrees celsius all year round: Perfect for those of you wishing to get away from the torrid spring warmth.