This isn’t a list of travel editor picks. The Top 10 Scenes of West Lake are based on an age-old aesthetic tradition that dates back to 12th century and has inspired some of the best literature and art in Chinese civilization. These scenes are artworks themselves, curated by both humans and nature. The earliest reference to these ten scenes appeared in Southern Song Dynasty when the construction of the lake was at its peak. As the capital city, Lin’an, today known as Hangzhou, attracted talented scholars, writers, and artists, giving rise to many lake-themed shanshui (山水) or Chinese landscape paintings. Works by painters from the Imperial Painting Academy were particularly influential—so much so that rather than simply mimicking reality, painters projected their inner world on the larger universe. Similarly, poets strove for a balanced relationship, one in which man and nature were equal. Over time, scenes for every season began to take shape. With the fall of the Southern Song Dynasty, these scenes dipped out of memory, but they came bubbling back to the surface four centuries later when Emperor Kangxi of the Qing Dynasty took an interest and rejuvenated the lake with his works of calligraphy and poetic names. Today, you can find these names inscribed on a stele at their respective locations. So, get your walking shoes on and hit as many of these sites as you can, and maybe you too will be inspired like the poets and painters of ancient China.

Named after Song poet and Hangzhou governor Su Shi, this expansive causeway cuts through the western third of West Lake—a whopping 2,800-meter belt perfect for biking. The reason spring is the best time to visit is evident in the peach blossoms perfuming the moon bridges of the causeway, as well as the soft willows. Perhaps the best way to enjoy the path is to start off at the north, a stone’s throw from the Shangri-La Hotel. Walk, jog, bike, or rollerblade down the causeway to admire its six bridges and their charms. An early morning walk can also be curiously soothing considering the trek’s popularity. 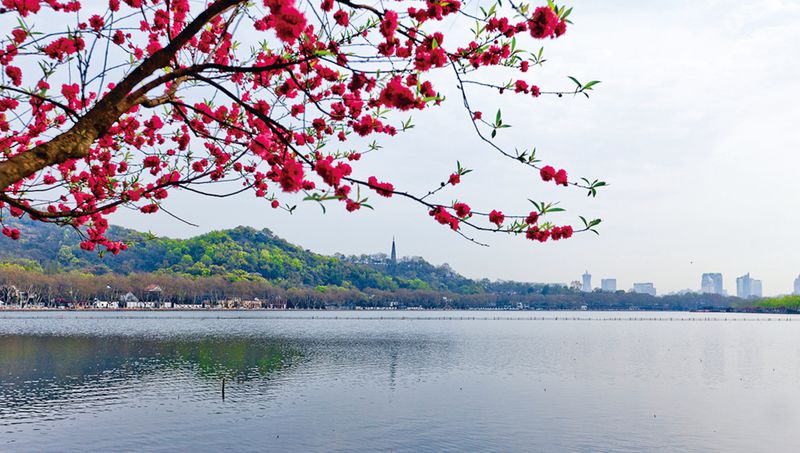 Quyuan Garden’s lotus lilies bud with ebullient pink, and in high summer you’ll see plenty of steam rising from the green surface of the pond. The garden used to be a brewery for making wine in the Southern Song Dynasty. Both bouquets of summer lotus flowers and fresh wine punctuated the musings of poets and wanderers who meandered through this stunning scenery. 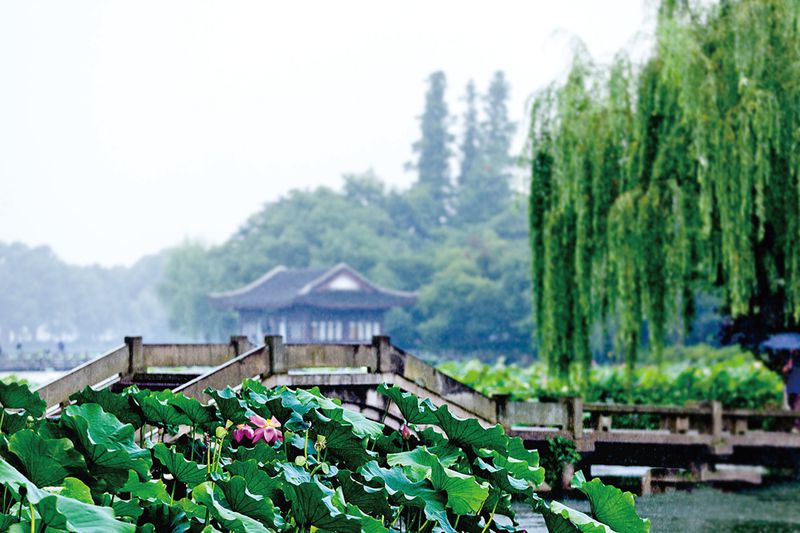 Autumn Moon over the Calm Lake

When late autumn looms and the moon is full, the scenery here is renowned for its romance. Located at Bai Causeway’s western point on Gushan Hill, this spot is one of the best places for a panoramic view of the lake. Of course, you can also jump on a boat, cruising while appreciating the serenity of the moonlit lake like a real Song Dynasty connoisseur. Considering the great Emperor Kangxi of the Qing Dynasty enjoyed this particular spot, it’s guaranteed not to disappoint. With a garden, a stele pavilion, a winding bridge, and Gushan Hill behind you, there is plenty to see before nightfall. 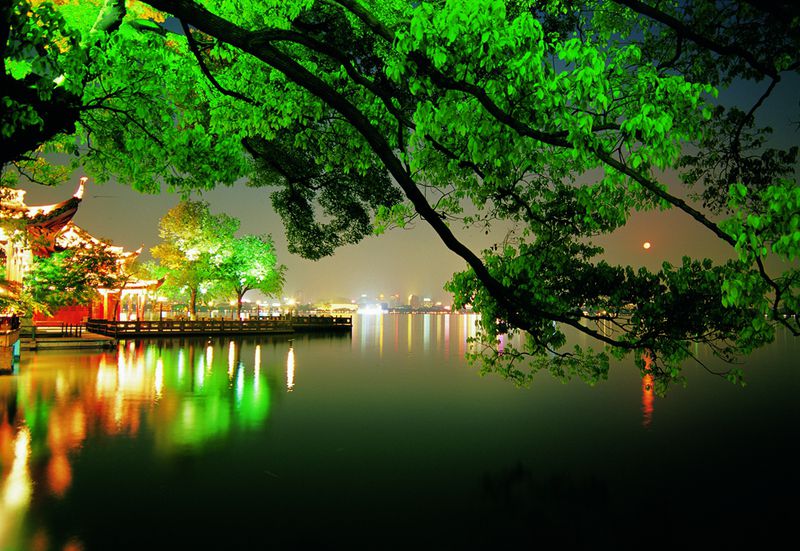 Lingering Snow on the Broken Bridge

When rare snow hits, this area is abuzz with visitors (particularly couples) looking for that perfect snapshot of the Broken Bridge. Located at the east end of the Bai Causeway in the north of the lake, the Broken Bridge, contrary to its name, is firm and intact. It only appears to be broken after a snowfall when the sunny side of the bridge melts the newly-fallen flakes. With its dark brown surface revealed, it creates an illusion that the bridge is broken from the Bai Causeway. But what really makes this site spectacular is its role in the famous folk tale “Legend of the White Snake”—as the spot where the couple in this romantic story first met—making it one of the most romantic spots in Hangzhou. 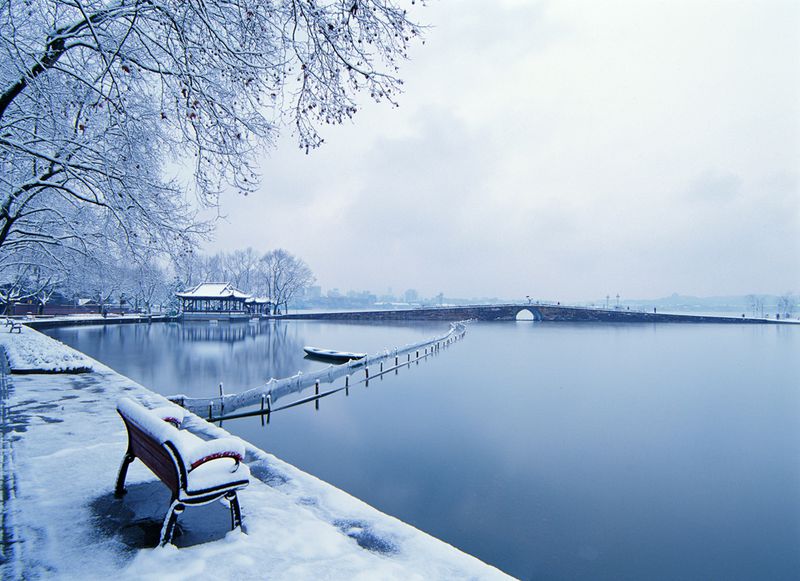 Swirls of orange, albino, and calico carp make these ponds into living paintings. Nestled at the southern end of Su Causeway, the area was once owned by a few ancient officials and literati as a lakeside villa, and over time it has been decorated with gardens of rockeries and pavilions. The Red Fish Pond is located at the center of the garden complex. An interesting scene at this spot is when the brocade carps vie for fallen peach blossom petals in spring. Outside the garden in the free waters of the West Inner Lake, an even larger and no doubt happier school of fish can be found. 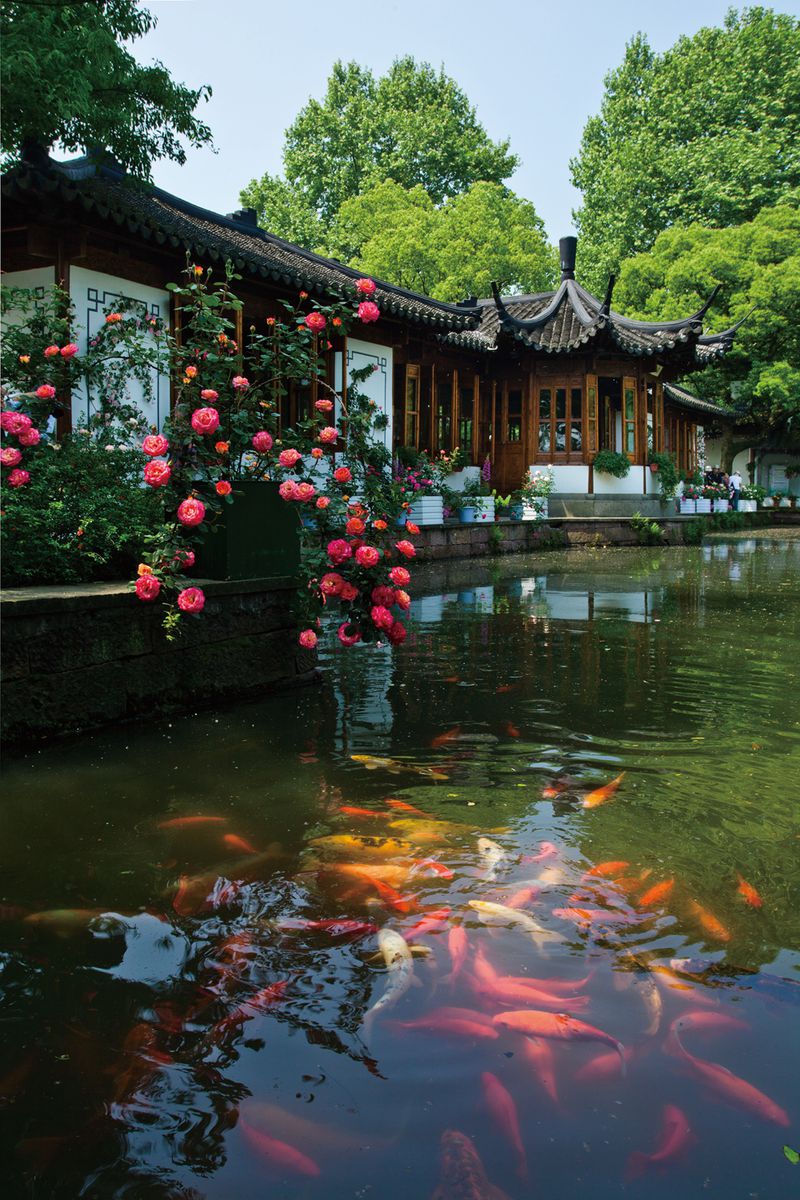 Orioles Singing in the Willows

This is where locals and visitors alike go to get away from it all: 200,000 square meters of beauty and willows. In spring, the songs of the orioles ring through the willows, mixed with elderly Hangzhou residents crooning classical Chinese opera odes. The orioles in China aren’t just favored for their song; they’re a symbol of vitality and the natural order. Ming Dynasty poet Wan Dafu wrote of this place, “The singing of the orioles never stops in the forest; also, somewhere on the pleasure boats over the lake comes more music.” 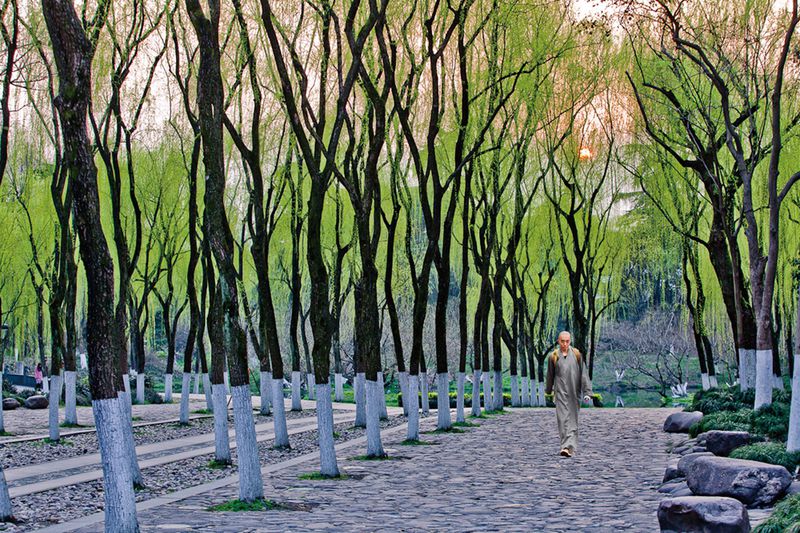 If you find yourself far from Hangzhou and still hanker for the Three Pools Mirroring the Moon, just take a one-yuan note from your pocket and look at the back. Obviously much better in person, this little islet features three two-meter-tall pagodas with an almost alien-like ethereal aesthetic. Marked with five round holes, these pagodas are lit at night to match the shimmering geometry of the full-autumn moon. Booking a boat early is a necessity; long queues are inevitable for what is arguably one of the most famous and historic art installations in China—an island set up in the shape of the character “田” (meaning “farm field”). If you spend enough time here, you may find yourself wondering, as did the original creators centuries ago, whether this is a land of immortal fairies. 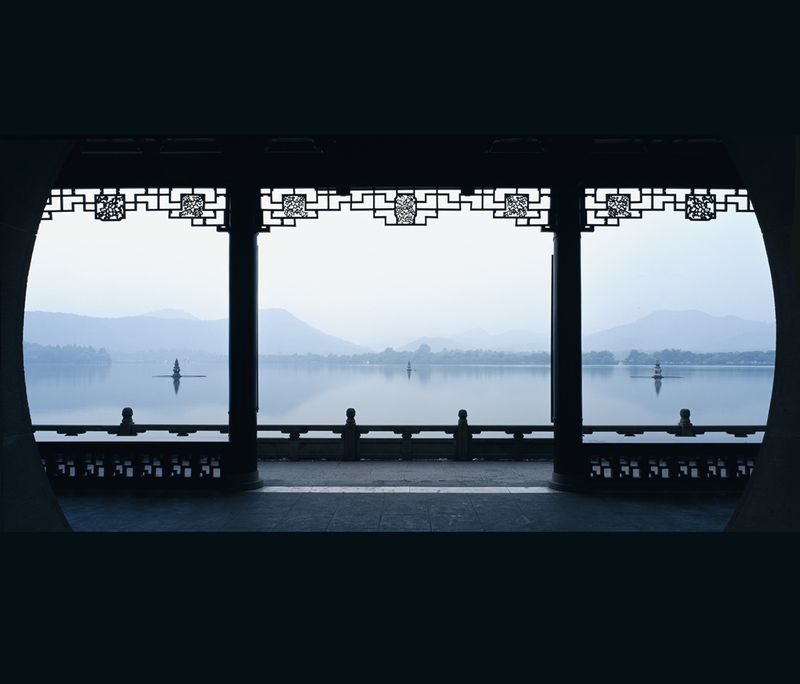 Whether you’re in it for the exercise or just trying to get a little closer to the divine, the north and south peaks of the eastern stretch of the Tianmu Mountain range can’t be missed. The best viewing spot for the twin peaks is by the Hongchun Bridge (洪春桥) in the northwest corner of West Lake. If you’re lucky enough to be visiting on a foggy day, you will see both peaks poking through the haze during a morning stroll. About five kilometers apart, the South Peak is over 256 meters tall, about 100 meters shorter than the Northern Peak. A hike to the North Peak will take you through the Lingyin Temple (灵隐寺)  scenic area. 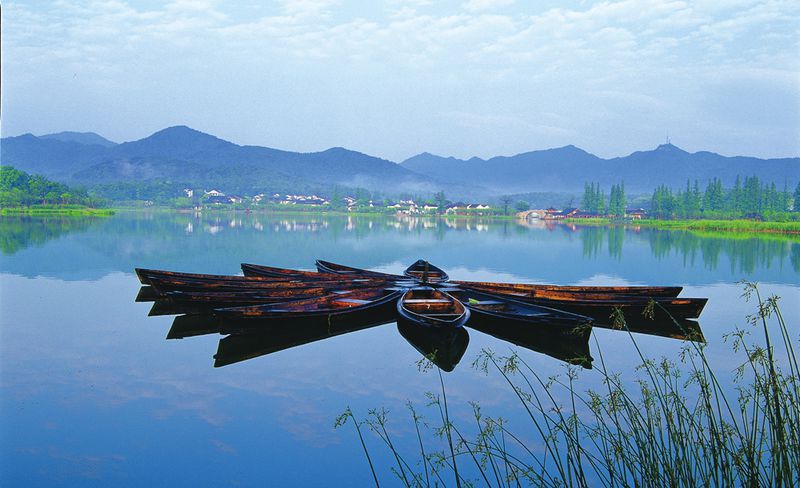 The “glowing” reputation of this pagoda can be seen in the evening, when the hues of regal Buddhist red shine with the sunset. But, if you mention this site to anyone in China, the first thing to come to mind is the myth of the White Snake, who, legend has it, is still trapped beneath this towering monolith. 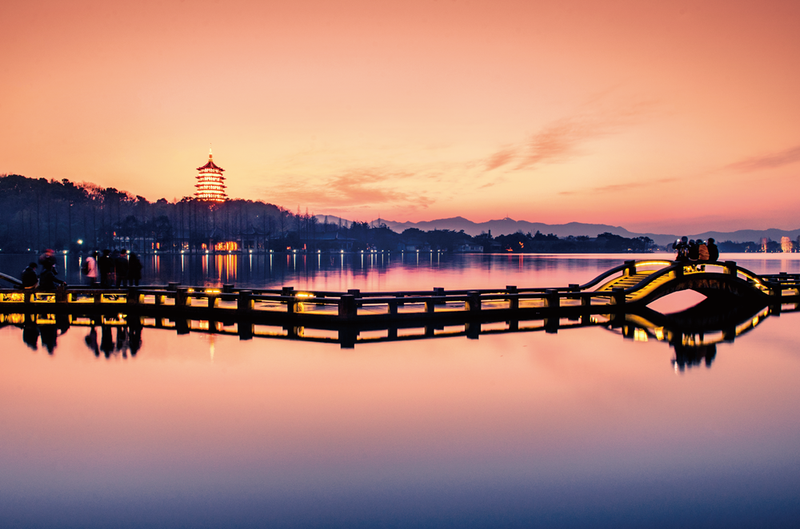 At first sight, this spot might not seem to have any particular importance, but just close your eyes and listen. Around 4pm every day, the evening bell inside Jingci Temple (净慈禅寺) on the northern slope of Nanping Hill (南屏山)  resonates against the limestone hills; the sound travels across the lake and echoes when it meets the igneous stone of Geling Hill (葛岭). The sound was of course more resonant in the bell’s younger days without the noise of the modern city, but this is still one of the oldest attractions on West Lake. Inside the maroon and butter-yellow Jingci Temple, pilgrims often line up and nurse home-brewed tea while monks ignite their incense sticks and pay homage. It’s also customary for local people in Hangzhou to visit Jingci Temple on Chinese New Year’s Eve to strike the bell in a spirit of respect and reflection.

Story from Hangzhou At A Glance by TWOC. You can pick up a copy now or daownload a digital copy on our China Dispatch app. Go get your copy now.