The bike-sharing world moves fast, and competition is fierce. Mobike and ofo have been dueling it out for first place, but the latest news indicate a bumpier road ahead for ofo.

Bikelock Technology, the operator of ofo, has announced they will pull out of 14 cities in China. These include Qingdao, Jinan, and Sanya, as well as a host of third-tier cities.

Ofo initial strategy was to compete with Mobike in terms of cost—Mobike started out with more expensive, bulkier bikes (which have since been modified to make them much cheaper) while ofo came out of the gate with lower-price bikes without the GPS-tracking bells and whistles. This has made ofo bikes a more common target of vandals and thieves, but also lowered the risk attached to each individual bike and made it easier for ofo to recoup any potential losses.

Took him a week to find a working bike (tianjimedia.com)

The company has, however, run into various other roadblocks. Officials in various cities—such as Huizhou, Guangdong, and Tai’an, Shandong—have issued orders for bike-sharing companies to rein in their errant bikes, which were not heeded by ofo, resulting in crackdowns (though it’s pretty safe to say officials in various cities are getting annoyed with bike-sharing companies in general, not just ofo, as bikes continue cluttering up footpaths). There are also potentially legal issues, such as a recent case (Chinese) in which a cyclist sued ofo because the brakes on his bike failed, leading to an accident.

These problems with local governments may be why ofo is withdrawing, though in lieu of a public statement from the company itself, we can’t be sure. Meanwhile, despite withdrawing from some Chinese cities, ofo has been making its way abroad with an experimental ride-sharing project in the hallowed UK city of Cambridge.

You’d think, amid all of this, that Mobike would be celebrating. Well, things have been pretty hectic on their side of the fence as well. 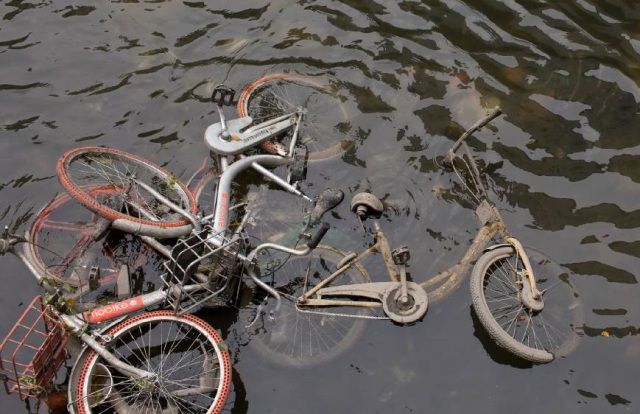 Over the fence and into the water (ifeng.com)

Mobike is currently tussling with Zhihu, a question-and-answer website that’s basically the Chinese equivalent of Quora. Apparently, a Zhihu user posted claims of corruption among Mobike executives. These posts were erased relatively quickly, but Mobike is now suing Zhihu for 100,000 RMB and, crucially, the identity of the anonymous poster. The financial side could easily be settled, but revealing the identity of a Zhihu poster would have a chilling effect on the site’s operations, not to mention all the ethical questions it would raise, so the case will have to go to court.