Urbanization has left only the elderly as stewards of the countryside

When reporters from Xi’an’s Huashang Daily asked 99-year-old Yu Fangyin about his secret to longevity, he told them he drinks 10 kilograms of rice wine every month. His daughter, in the same report, said that her father smokes as well and doesn’t really have any other interests, except perhaps getting married as a centenarian.

The local newspaper was collecting amusing health advice from the elderly residents of Shuping, a Shaanxi community of about 5,000 people, where the average life expectancy is well above the national average of 75 years. A similar fascination with elderly communities is being played out on the other side of the country, in southern China’s Guangxi Zhuang Autonomous Region. The village of Bama has been enjoying a boom in tourists seeking better health, due the advanced age of the residents supposedly being proof of beneficial geo-magnetic forces or longevity-boosting water. Researchers, however, point out that it’s a mountainous, underdeveloped region, and the advanced ages are more likely due to the once-isolated population and natural selection.

Not all rural villages packed with elderly are doing as well as Bama and Shuping. Health problems, increased rates of suicide, and families that have been separated by the forces of urbanization are all features that have come to define the experience of living in China’s countryside as an elderly person.

But perhaps the most striking feature to interlopers in these aging rural communities is the fact that a whole range of ages are missing. Elderly can be found, and children, but working-age adults are rarely seen, particularly in the smallest villages, where farms are largely tended by the elderly.

China’s stratospheric growth in recent decades has in large part been due to a population shift into its cities, but this process has hollowed out rural areas of the most productive age group, and in many cases it has left the very young and very old to fend for themselves. Often the elderly are not just stewards of the land, but of the very young children as well.

By 2050 over a quarter of the Chinese population will be over 65 according to most population projections. In many rural areas, this aged future has already arrived, and the system is struggling to keep ahead. Estimates in 2013 put the percentage of rural families in which grandparents are the primary caregiver for grandchildren at 35 percent. Meanwhile, these elderly are sometimes also struggling to take care of themselves amid their own health problems.

“Most rural doctors can only diagnose fevers and colds, and for most diseases, they just give antibiotics though an IV. A lot of the doctors in county-level hospitals did go to school, but they’ve only learned from textbooks, and lack experience compared to city doctors. They never had real mentors when they were interns,” said Dr. Zhang, (pseudonym), a doctor in a third-tier city in Anhui. A lot of patients that come through the hospital are elderly, and most are local.

Occasionally, elderly people from the countryside come through the doors in an effort to find better medical treatment. If they have the means, most would prefer to go to Beijing, but even a hospital in a third-tier city is an expensive proposition. So much so, that Dr. Zhang fears many elderly people in the countryside simply can’t afford medical treatment. “Hospitals don’t receive much money from the government and they have to make their own money. Sometimes, this means charging 10,000 yuan for a surgical solution that could instead be treated for 3,000 yuan,” she told TWOC.

Despite the fact that 70 to 80 percent of the costs can be covered under the insurance offered at county-level hospitals, the costs still scare the patients away—a view that is supported by national surveys of healthcare spending and studies of elderly. In Abingluogu county, Sichuan province, volunteers from Shenzhen bring toys and candy to the left-behind children in the village during the Spring Festival (VCG)

In 2011 and 2012, the biggest study to date of the nation’s elderly was launched, and it continues to this day. Over 17,000 middle-aged and elderly people throughout China sat down for interviews with over 300 researchers from China’s elite Peking University.

The people interviewed were chosen to be representative of their age group. All were either over the age of 45, or had a spouse over this age.

When this phase of the report was issued in 2013, it listed authors from universities from China and around the world, as well as the World Bank and Rand Corporation. But before even they were listed, credit was given to those 17,708 interviewees.

The ongoing project, formally dubbed the China Health and Retirement Longitudinal Study, is known by its acronym CHARLS. The study, which tracks these people over many years, is the foundation for much of China’s current knowledge of its aging population, and the results make for worrying reading.

Across the CHARLS survey’s myriad findings, one thing becomes crystal clear: rural residents (recorded in the study as those holding rural hukou, or household registration) lead much more difficult lives.

Elderly rural residents—those over 60—were more likely to go without diagnosis for health problems, like high blood pressure. When looking at spending and consumption, urban residents experience a U-shape curve, in which a lot is spent in their later years. In rural areas, however, spending trails off. Urban residents pour money into healthcare when they age, while rural residents simply don’t. About half of the elderly throughout China receive cash from family members, which means that about half go without.

Then there is outright poverty—the CHARLS study calculates poverty by looking at what people spend, rather than their patchwork sources of income, which aren’t necessarily indicative of the costs of the local area. Rural holders experience a poverty rate, as determined by spending, of 28 percent. For urban residents, that statistic is 9.5 percent. It’s worse for women and those who live alone, and the study points to a lot of wealth transfer from cities to the countryside.

And then there are added responsibilities and expenses of rearing children. Stripping away elderly who live with their spouse or children, around 9 percent of China’s elderly live alone. There are 16 percent who live with others, and in these cases, around 60 percent live with grandchildren but no children or children-in-law. The report explicitly states that “a large number of elderly play the role of primary caretaker of grandchildren when children and their spouses migrate.” 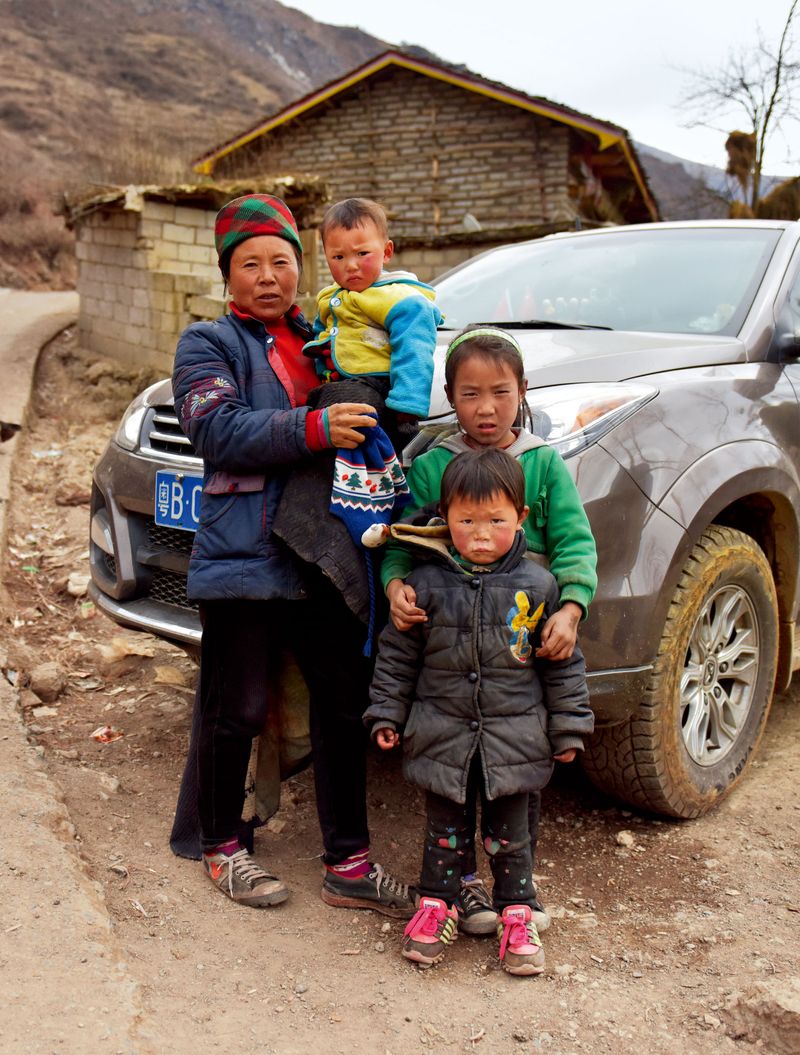 With the young adults away as migrant workers, the elderly are left as caretakers of their grandchildren (VCG)

Boiled down to their basics, this means that about one in 10 of China’s elderly are raising grandchildren without their children around to help.

Estimates released by the National Health and Family Planning Commission in October of 2016 put the number of left-behind children in the countryside at 61 million, with the bulk of these being cared for by grandparents. Citing the survey, a South China Morning Post analysis stated that “the problem of left-behind children is most severe in Anhui, Henan and Sichuan provinces, the key sources of migrant workers, where 44 percent of rural children live without their mother or father. This is far higher than the national average of 35 per cent.”

Perhaps the biggest takeaway there is that even the national average means that over a third of children are not being raised by their parents.

And then there are the elderly who receive little or no help from their offspring.

Across China, various measures are being taken to try to address the issue, some more effectively than others. One Sichuan village started putting neglectful offspring on a noticeboard and broadcasting the names of offenders on loudspeakers, in an effort to shame them and encourage better treatment of elderly.

Other local governments have issued rules that force children to visit their elderly parents. These certainly occupy headlines, though very few wayward offspring have actually been taken to court by neglected parents. One village in Hebei launched measures to encourage able-bodied elderly to assist their less-able elderly neighbors.

From the national level, arguably the most important measures relate to pension schemes and healthcare. China has been rolling out various pension schemes over the last decade, but the financial scale of the problem is, to say the least, daunting. In 2014, the pension fund went from surplus to deficit. Wang Dehua, an expert from the Chinese Academy of Social Sciences, told China News that in that year, the net pension funds added by employees was 1.87 trillion RMB, but that 1.9 trillion was spent, resulting in a gap of over 30 billion RMB. Should the current trends continue, driven by a dwindling workforce and increasing number of elderly, Wang warned the fund that all the pension reserves could be drained by 2024.

Since 2014, the government has continued to rack up a deficit in this area and has been seeking means to solve the problem. Raising the retirement age has been suggested, and each time it has met with a widely hostile public response, both from the old, as well as the young who view older workers as occupying too many of the best positions. The solution has been to turn China’s pension funds into an investment fund that can be used on the stock market. By the end of 2016, hundreds of billions of RMB had been given the green light to go on the domestic stock market.

If using the nation’s pension fund to invest sounds like a risky proposition to you, you’re not alone—none other than China’s breast-beating nationalist tabloid, the Global Times, issued a note of concern, saying that local governments have often made unwise investments and that graft was a large risk.

The system, as it stands, will try to separate local governments from the investment of this money. Local governments will put money into the National Social Security Fund, which is administered from a higher level of government, but has permission to invest in riskier projects.

But will this money ultimately trickle down to the rural elderly?

Without a crystal ball none can say, but CHARLS has found that at the moment yes, rural elderly do in fact seem to receive wider coverage than their urban counterparts (though a majority of both are covered) under pension schemes, though the amounts vary and tend to be very little. A medical emergency can still wipe out their finances in the blink of an eye. Or as Dr. Zhang would put it, “The government is paying more for people’s insurance, but medicine and checkup fees keep rising and the burden on patients is getting even heavier.”

It would seem that, if China’s future elderly are to be taken care of, reform will need to stretch well beyond pension funds alone. Whether the other measures being attempted will add up to a cohesive result is, at best, an optimistic forecast. But one thing is certain: time is running out.

The Old Country is a story from our issue, “Wildest Fantasy.” To read the entire issue, become a subscriber and receive the full magazine. Alternatively, you can purchase the digital version from the App Store.