Shenzhen and Guangzhou have become the first Chinese cities to test women-only carriages on their metro systems. The trial, which began on July 26 in Shenzhen and July 28 in Guangzhou, has reignited the debate surrounding gender equality in China.

To minimize any disruption the initiative may cause, such as overcrowding and wasted space, the Chinese People’s Political Consultative Conference Guangdong Provincial Committee decided to trial the system on a temporary basis. In Shenzhen, one carriage on every rush-hour train on lines 1, 3, 4, and 5 has been designated as a “priority carriage” for women. The roll-out is even more limited in Guangzhou, applied only to rush hour trains on Line 1.

The idea, which was inspired by similar systems that have already been implemented in Cairo, Rio de Janeiro, and Tokyo, is the result of “careful research” that is “searching for new methods of transportation and continually improving the quality of the transport service” says committee member Su Zhongyang.

Yet the trial has not been welcomed by everybody. Some netizens questioned,“What happened to gender equality?” While others were more worried by the precedent that the system has set, asking whether it was “the beginning of [social] divisions.” 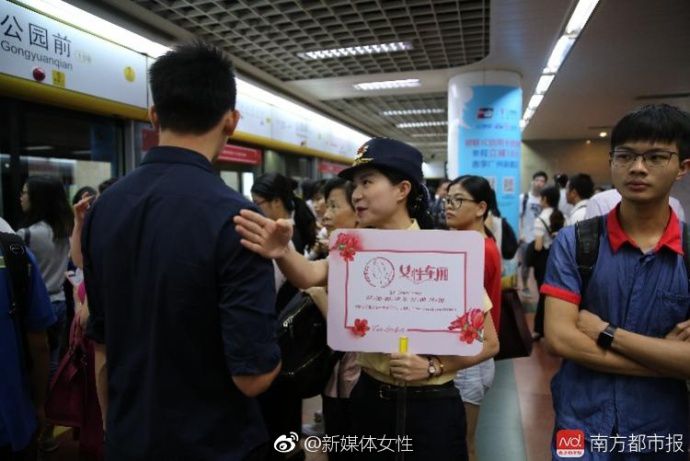 However, Su emphasized that the concept behind the system was about rights “advocacy, not enforcing differential treatment.” He explained that the move was designed to “curb groping, protect pregnant women and babies, and make the facilities friendlier for female passengers.”

Most of the passengers interviewed in a Guangzhou Daily livestream on the morning of the start of the trial supported the initiative, saying that they had “no problems with women-only carriages.” “It’s great,” one passenger said, though some wondered whether it would lead to “problems of overcrowding during rush hour,” adding that “both men and women need to get to work.”

The system received support online, too. “These are the equal rights I’ve been looking forward to,” wrote one woman on Weibo, who also hoped that there will be a time when “men and women can stand shoulder to shoulder in the same carriage without fear of harassment and groping.” Hitting back at those who had criticized the trial run, another Weibo user wrote that “if you think making women-only carriages is against gender equality, then you obviously haven’t come across groping.”

Enforcing the new system is, however, a completely separate issue and has thus far proved difficult. Despite announcements in stations, notices, stickers on walls and floors, and special livery on the priority carriages, some men have flouted the rule. At 7:37 on June 28, just seven minutes after the trial began, one passenger took to Weibo to note that there “are currently lots of guys sitting in the women-only carriages.” Photos from the morning’s commute suggest that the incident was not isolated.

As of yet, no end date has been announced for the trial period, with the committee merely committing to “carefully considering…the data gathered [from the trial] and listening to passengers’ comments and suggestions.”