Hot and heavy greetings to all and welcome back to the Viral Week. Coming up on today’s issue, we bring you the first train without tracks, evidence that destruction is easier than construction, robot gaokao and diseases, and a very sad anniversary. But first…

Now that the business of traditional Chinese combatants fighting experts in other disciplines has died down, practitioners can get back to what they are known for—outrageous stunts.

A largely male crowd gathered at a hangar just outside of Beijing to watch tai chi maestro Ye Hongwei attempt to break a world record with the help of his little friend.

As the rules were read out, Ye attached a rope to his penis. On the other end was a five-ton military helicopter. When the challenge began, Ye began walking backwards in an effort to pull the helicopter along.

If you’re thinking that this is one of those nonsense world records that you only “break” because no one has attempted it before, then you are sorely mistaken. Ye needed to pull further than eight meters to become the new record holder. He managed over ten because…why not.

Ye’s world-beating win was authorized by the World Record Certification Limited which, if you simply go look at their website, seems a far cry from Guinness. 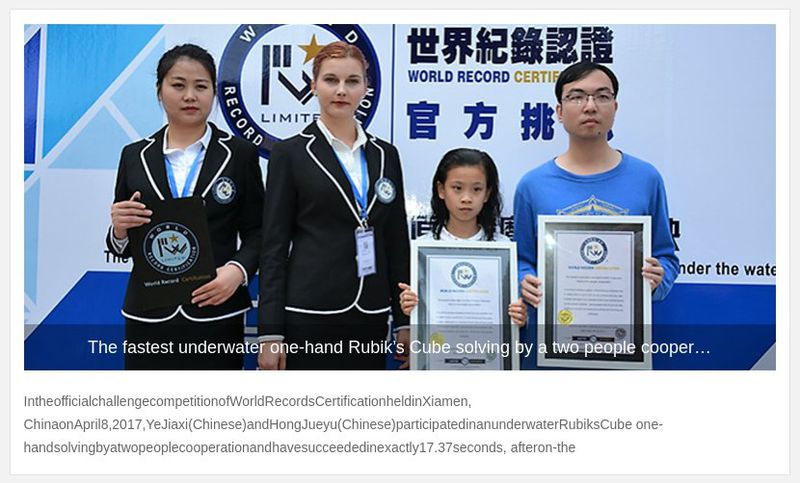 World Record Certification Limited caption: Read all this in one breath

A new environmentally friendly, technologically advanced train has been unveiled in Zhuzhou, Hunan province. The gimmick? No rails.

The first of its kind, this new train-bus offspring will run on specially constructed roads with its rubber wheels.

This train is made up of three carriages, is thirty meters in length, and can carry a load of five hundred passengers. It runs on electricity and can travel up to 70 km/h. The makers say that implementing this system would cost only a fraction of a subway system.

Remember back to when you were in primary school. It was playtime and you hurried over the Lego station and decided to make the tallest tower you could. That feeling of satisfaction and fulfilment washed over you once completed after what seemed like hours. Then Biff, the class bully, comes over and knocks the whole thing down in an instant.

This is exactly what happened in cave in Songtao county, Guizhou province, except instead of you, it’s nature, and instead of Biff, it’s this man.

Stalagmites like the ones shown take millennia to form but only three attempts to decapitate. Cave officials have already contacted the local police but unfortunately the man has yet to be found. There have also been reports of similar vandalism in Shandong and Liaoning provinces.

The South China Morning Post reported that a lawyer, Chen Hao, has said that the cave administrators should have the broken piece appraised. Then they can either have the man detained on criminal charges or sue for compensation.

The Green Harbor Red-Ribbon School is the only facility in China that provides education, refuge, and acceptance to children with HIV/AIDS. Situated in Linfen, Shanxi province, they provide boarding facilities at no cost.

This year will see 16 of their 33 students taking the gaokao as they enter the next phase of their lives.

Unfortunately, controversy has arisen as the local authorities have determined that Green Harbor students will take their exams separately from other students in the city.

Normally, students from all the schools within a city will be gathered at certain locations to take the gaokao. This time an exception has been made for students with HIV/AIDS and they will be sent to other locations.

Critics say that this reinforces the prejudices and discrimination that saw the need for a special school in the first place. Testing in the same room carries no risk of infection, so this separation helps disseminate false information about the illness.

In defense of the move, Kang Chuangji, director of the student admission office in Linfen, has said that they are taking into consideration the concerns of other students. (Though if education was done right, there wouldn’t be any concerns)

Further south, in the city of Chengdu, a robot will be taking this year’s exam. AI-MATHS was developed by Chengdu Zhunxingyunxue Technology and will be challenging itself on the mathematics portion of the gaokao.

China’s Ministry of Science and Technology have previously announced plans for gaokao robots. The hope is that they will be able to enter leading universities by 2020.

So to sum up, China will be marginalizing humans and welcoming smarter robots.

Yesterday marked that anniversary of an important event in Chinese history—the death of Emperor Huizong.

The eighth emperor of the Song dynasty, he was a big proponent of Taoism and actively banned Buddhism.

But perhaps what Emperor Huizong was best known for was his love of the arts. He was a painter, poet, calligrapher, and musician. He even wrote the Treatise of Tea, a must-read book on the most sophisticated tea ceremony in Chinese history.

Unfortunately it was this love of the arts that led to his downfall. Emperor Huizong neglected his military and soon the Song capital was overrun with enemy armed forces. An incident largely forgotten by today’s generation, Huizong and his comrades were forced to flee to avoid death.