It’s not unusual to hear complaints about the state of school uniforms. In 2015 China Daily remarked that Chinese netizens felt their uniforms “could claim the global crown” in ugliness.

The newspaper cited a Weibo survey in which just 10 percent of respondents said they looked good, while 44.6 percent were happy to call school uniforms ugly—slack, shapeless track suits with “no aesthetic value at all.”

Scrapping uniforms altogether is an unlikely solution, though. While some deplore the homogeneity, others are loath to let personal appearance become a distraction. In March 2017, one school in Fujian had to ban imported sneakers, explaining that students were constantly one-upping each other with expensive footwear.

While schools such as the Zhengzhou Experimental School are beginning to explore clothing more clearly defined by gender, others are importing styles from the UK and South Korea. Schools have even hosted fashion shows to help improve the aesthetics of mandatory school attire. 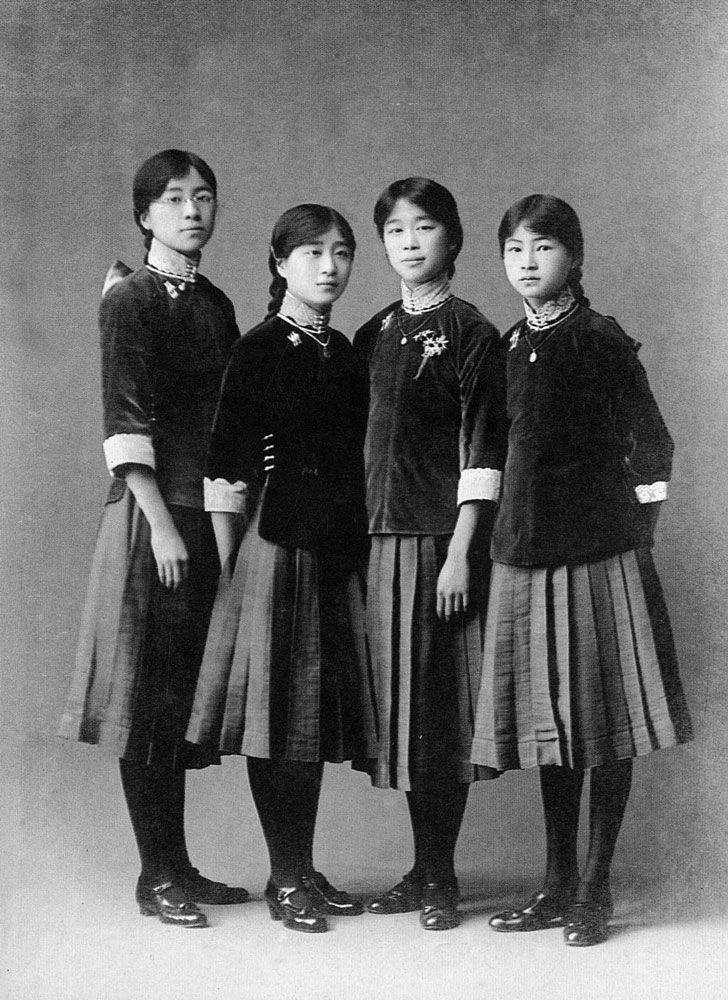 But as inequality grows in society, uniforms are becoming yet another form of status symbol—then again, how students dress has always had important political and social implications in China.

Indeed, uniforms were first introduced in the fallout of the crippling defeat of the Second Opium War as part of an urgent call to learn from the West. Encouraged by missionaries, Qing officials sponsored numerous “new” schools in Beijing, Fuzhou and Shanghai in which foreign languages, science and military knowledge replaced traditional texts. Clad in robes, hats and boots, their students wore uniforms similar to the attire of government officials—albeit without the badges of rank—to show that their education was in the service of government (women were not allowed to enroll).

By the time of the Republic of China (1912 – 1949), alterations in apparel and customs became critical components of the government’s larger social and political reform. Besides abolishing the “Manchu queue” and female foot binding, the government stipulated that official ceremonial wear for men should be a black tuxedo with silk hat. In the same year, the Ministry of Education stated that, “male uniforms should resemble that of common military training wear,” based on Western officer garb.

Students returning from Japan brought new features, including stand-up collars. Originally based on Prussian  military designs, they were called “students’ suits” (学生装) in China. But despite a newfound eagerness to modernize the nation through outside ideas, the Republic was also characterized by strong nationalistic sentiments; regulations expected that “school uniforms should be mainly made of plain, strong materials produced in the country.”

Although restrictions had been lifted since 1907, female schools were rare and limited to students from elite families. They wore unembroidered versions of typical female attire, usually a cropped cheongsam top and black skirt, a look known as the “civilized new outfit” (文明新装) which drew admiring commentary from some in the intellectual class. “Ever since the flourishing of female schools, all students wear light makeup and simple, elegant clothes,” noted scholar Xu Ke, who deplored the bound feet, piercings, jewelry and excessive makeup that had long epitomized female beauty standards. “Even women in brothels copy [their] look.”

Nevertheless the May Fourth Movement—in which over 3,000 students gathered in front of the former Forbidden City to protest the terms of the Treaty of Versailles on May 4, 1919—stunned the establishment. Speaking with patriotic fervor and eloquence, the students demanded a modernizing nation that adopted ideas from Western civilization. The ensuing publicity cemented their attire within the national imagination, and women’s uniforms became known as “May Fourth suits” (五四装); they are now ubiquitous in films and TV shows about the early Republican period.

In 2001, logos for Beijing’s application to host the 2008 Summer Olympic Games could be found on many primary students’ uniform (Fotoe)

Surprisingly, traditional Manchurian gowns made a comeback in the 1920s and 30s as women began favoring a single cheongsam over their previous two-piece outfits. “It is not to show loyalty to the Manchurian Qing government, advocating the restoration of the monarch, but because women are intentionally mimicking men,” noted writer Eileen Chang. “Influenced by Western culture and infatuated with the idea of gender quality…they reject all feminine qualities and would rather exterminate all characteristics of women. The early qipao were squared shaped and quite stern, bearing the air of the puritans.” At schools, qipao were usually plain white or Indanthrene blue, but the newly fashionable cheongsam soon took society by storm, quickly evolving away from its prudish origins into tight fitting, revealing versions.

The war-torn 1940s ended with the arrival of the Communist government in 1949. Unlike their Republic predecessors, attire was probably the least priority for the Maoists, who were far more concerned with the notion of a united front between workers, peasants and intellectuals. In Yuan Ze and Hu Yue’s One Hundred Years of Clothing, one Peking University student recalled a riot of clothing styles in these early years, including worker’s gear, long gowns, qipao, Western suits and leather shoes.

It didn’t last long. Amid a series of ideological campaigns, the drab, unadorned aesthetic of the worker and peasant classes became the dominant style, casting a long shadow on fashion that, in many schools, continues to this day. Yet this Marxist zeal gave rise to one particularly colorful item—the red scarf. 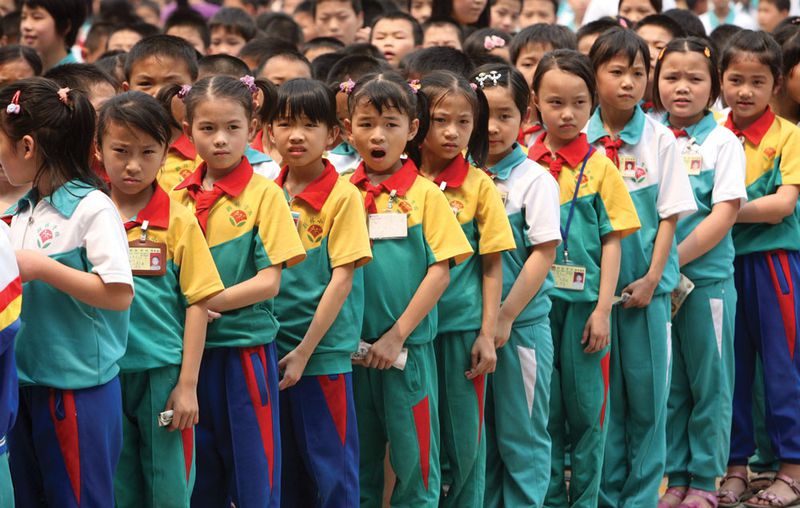 Students in Foshan, Guangdong province line up to make donations for earthquake victims in Sichuan, May 2008 (VCG)

Symbolizing a corner of the Communist red flag—itself a symbol of the revolutionary martyrs’ blood—the scarf is the symbol of the Young Pioneers, the preteen stepping-stone to the Communist Youth League. Inspired by Soviet style, Young Pioneers wore white shirts and dark trousers or knee-length skirts for girls. After 1952, girls were allowed to wear floral skirts, because children are the “flowers of the nation,” but as left-wing thought hardened in the 1960s, military styles became en vogue. Proud schoolboys would aspire to wear a blue-striped sailor shirt, known as “spirit of the sea” (海魂衫) paired with red scarf and a “national defense green” (国防绿) cloth bag.

During the Cultural Revolution, both the Young Pioneers and Youth League were disbanded as teens across China organized themselves into rival factions of Red Guards. Instantly identifiable by their red armbands, Red Guards leaving for their ideological instruction in Beijing had to prepare their own “uniform” of sorts, as described in Frank Dikötter’s The Cultural Revolution: A People’s History. This included a letter of introduction from the local Cultural Revolution committee, “a canvas shoulder bag, an aluminum flask, a tea cup, toothbrush and towel, and of course the ubiquitous Little Red Book, tucked away in a pocket or rolled in a quilt.”

As reform and opening-up gathered steam in the 1980s, individual choices like wearing bright colors no longer brought accusations of “bourgeois tendencies,” and Western fashions returned—indeed, government officials led the way by ditching their military costumes for a business suit and tie.

The tracksuit-style uniform so abhorred today first emerged in the 1990s, the culprit a 1993 notice from the Ministry of Education (then known as the China Education Committee) snappily titled “Suggestions Concerning Improving the Management of Urban Primary and Middle School Students’ Uniforms.”

In the heady days of post-revolution diversity during the early 1950s, students in Heilongjiang University’s campus wore a variety of styles (Fotoe)

According to the notice, uniforms ought to be “frugal, natural, lively, and functional,” while stressing they are not the same thing as “exercise clothes” and that policies of a particular region ought to be made with support from “students, parents, and all levels of society.” It also mentioned that designs should be based on the economic circumstances of the student body; the notice initially addressed only urban areas.

Officially associated with Young Pioneers, the red scarf lingered on as a totem of loyalty; primary schools in the 90s often expected students wear them in a show of school pride.

Such expectations continue today, alongside varied other styles more in line with Western standards, such as slacks or pleated skirts. Increasingly, though, elite, independent and boarding schools are adopting fashions that a student in the Republic of China might well recognize: long socks, collared shirts, sweater vests and ties. Meanwhile May Fourth suits are making a comeback on special occasions, such as graduation photos or assemblies commemorating the end of the war with Japan. Apparently, the school uniform, like history, has a way of repeating itself.

Class Acts is a story from our issue, “Wheel Life China.” To read the entire issue, become a subscriber and receive the full magazine. Alternatively, you can purchase the digital version from the App Store.