In an industry stuck in an IP age, crowd-funded Dahufa bucks the trend for safe, box-office friendly fare, and, though it failed to match this month’s big releases (Wu Kong and Despicable Me 3), it beat Midnight Diner 2—an IP based on two TV series and a film—in its first week by 21.6 million RMB (3.2 million USD).

The animated Dahufa, whose title uses characters for “big” and “uphold the law,” is also the first Chinese film to set its own content rating at PG-13. Alluding to the film’s violent content, Bu said in an interview with Weibo blogger Meiri Renwu that the decision was because the film was an “adult animated film the likes of which had never been seen before.” Prominent Weibo critic Chu Mufeng described the fight scenes in which the film’s Peanut People—enslaved and brainwashed subjects of a brutal regime who are not permitted to speak or have a sense of self-consciousness—were “beheaded, with blood spurting out as limbs and bodies were cracked open” as “Tarantino-esque.” 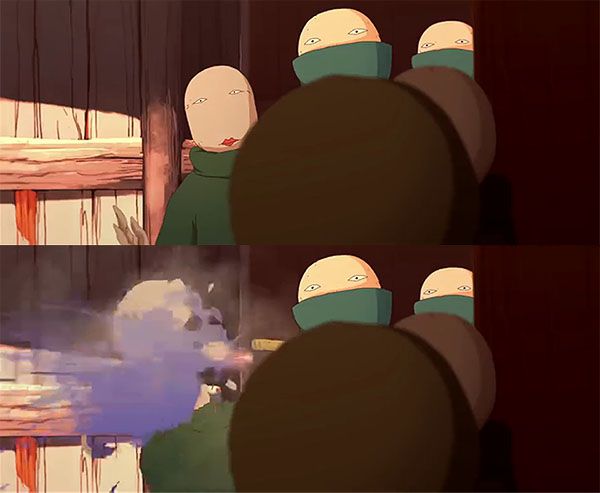 Perhaps more impressive than the breakthroughs for independent film-making and animation styles, Dahufa also sets a new standard for creative and conscientious storytelling. Indeed, it is a wonder that Dahufa made it past censors at all.

The film is saturated with politically implicit imagery and allegory. Chu compares Dahufa’s metaphors about the centralization of power in a fascist state to Orwell’s Animal Farm. He added that the film, which “holds a mirror up to contemporary society” with “bitter irony,” was not a “political fable”—an abstract exploration of morality through storytelling—but a “political forecast.”

What is perhaps more surprising is that, more than just raising these sensitive themes, Dahufa goes further and tells the story of the Peanut People, a population with “fake eyes and fake mouths” who live in a supposed “utopia,” overthrow a despotic government. According to one popular answer on Quora-like site Zhihu, responding to the question “How do you rate the animated film Dahufa?” with “This is a story about waking up and resisting.”

Bu Sifan said that he “wished to systematically explore a few problems [through] the animation, including being chained, and the fears behind restrictions.” On this front, his film delivers, albeit heavy-handedly. Dahufa probes everyday restrictions in a stylized utopia which is ruled over by despots called the Immortals. “Why is the sun this red and still so cold?” (为什么太阳这么红，还是这么冷?) one character asks in a jarring bit of referential dialogue.

Other criticisms of metonymically “red” figures go even further: “It’s just that old guy—hanging his propaganda posters on the outside, pretending to be an Immortal all day; it’s nauseating.”  (就是那臭老头，外面都挂着他的宣传画呢，整天装神仙，恶心死了。)

At other times, the film comments with verve and wit. One line, “Don’t be that bloody and violent again, be a little more civilized.” (别再那样血肉横飞，文明点), pokes fun at the government’s endless campaigns to promote “civilized” behavior.

The film’s political commentary was considered incisive enough to provoke the ire of The Communist Youth League (CYL), a prominent body of the CPC that organizes political activities for 14-28 year olds whose previous First Secretaries include Hu Yaobang, Hu Jintao, and Li Keqiang. In an article published on the CYL’s official WeChat account last week, Dahufa was criticized for being “full of malicious political metaphors” intended to increase ticket sales, the China Film Insider reported.

The release of Dahufa into a domestic market widely considered to spurn creativity has made waves, especially online. “Lots of netizens were surprised, and have even said that it’s the only film worth seeing all year,” wrote one blogger. The film has a respectable 8/10 score on the ratings website Douban, higher than both Wu Kong (5.4) and Despicable Me 3 (7.0).

Yet although Dahufa and its release—“Were the censors blind?” quipped 放逐 on Douban—can be considered a breakthrough for many reasons, it is by no means a perfect production. Dahufa’s liberal approach to narrative and world-building, which mixed allegory and realism, was a little too much for some.

“Dahufa belongs to the ‘pros outweigh the cons’ type of good [film],” 有用老阿飞—故园 wrote in a four-star Douban review, praising the film for its “veiled but not obscure content,” but concluding that some parts of the narrative “simply didn’t fit.” The criticism was echoed by other viewers, some of whom were less forgiving. 漂洋过海来看你 wrote, “I don’t care what it’s a metaphor of, please tell a story properly first,” giving the film two stars.

Despite the appetite for thought-provoking films such as Dahufa, with one reviewer saying they “want to encourage this type of production,” films such as Dahufa sit in that awkward gray area between “systematically exploring problems,” and digging too deep and falling into a black hole of censorship and censure. This deliberately edgy dynamic means there will likely always be a trade-off between narrative and content in Chinese films.