Zhuo Wei (卓伟) knew the price of fame exactly. For months, his surveillance team had been following actress Bai Baihe, hoping to prove rumors of her infidelity. They’d traveled as far as Japan, but it was in Thailand that Zhuo’s snoopers finally hit the jackpot: Video of Bai embracing a model, identified as Zhang Aipeng, on the street.

As Zhuo prepared for publication, someone claiming to be Bai’s friend offered “a big number” to spike the story. Without waiting to hear the sum, Zhuo hit the post button, igniting yet another Chinese celebrity sex scandal, while adding a further 1.6 million followers to his “China’s Number One Paparazzo Zhuo Wei” Weibo account and 200,000 users to his entertainment news app, Quanming Xingtan (“All-Star Investigation”).

Two months later, Zhuo learned the other price of fame. His personal Weibo, with over 7 million followers, was abruptly shuttered, along with his Studio Fengxing (“Travel Like the Wind”) company account, the account of photographer “Detective Zhao Wu’er,” and those of nearly 90 gossip and entertainment blogs across WeChat, Weibo, Toutiao, and other platforms.

Entertainment and sports journalism had long been considered “safe spaces” in China’s strictly regulated media environment, but on June 7, the rules suddenly changed. According to the State Cyberspace Administration, “The lowbrow and vulgar trends to amplify celebrity scandals, exploit personal privacy, sensationalize celebrity news, and display wealth and indulgent lifestyles” were now in the crosshairs of the Communist Party, who have called on the likes of Sina Weibo, Tencent, and Baidu to “combat the vulgar and sensationalist coverage of celebrity scandals and lifestyles.”

Until he found himself out of a job, Zhuo was China’s most prolific gossipmonger. It was Zhuo who revealed that director Zhang Yimou had three secret children despite the one-child policy, Zhuo who first reported the romance between actress Zhang Ziyi and musician Wang Feng, and Zhuo who caught married actor Wen Zhang cheating. For 14 years, Zhuo was the king of celebrity news, widely regarded as the top paparazzo in China.

While the English term “paparazzo” derives from a character in the 1960 film La Dolce Vita, the Chinese word 狗仔队 (gǒuzǎiduì, literally “team of puppies”), was coined in Hong Kong in the 1990s. According to Jimmy Lai, founding member of Next Magazine, which compiled the city’s first investigative team of entertainment reporters, the name was borrowed from a special Hong Kong police unit that worked with informants. Like puppies, they follow, sniff, and dig out what’s hidden. Paparazzi, though, is rarely a term of endearment, and neither is gouzai—the character “dog” (狗) has particularly negative connotations in mainland culture and can be a serious insult.

Zhuo, however, has never seen his work as degrading or trivial. In his gray suit and pinstriped shirt, he could be easily mistaken for a venture capitalist, and once told a journalist he was living his childhood dream. “I was probably the only person in the entire country aspiring to be a tabloid reporter at a young age,” Zhuo explained to Vista magazine in May, adding that reading about 1930s tabloid reporters in Shanghai had caught his imagination as a teen. 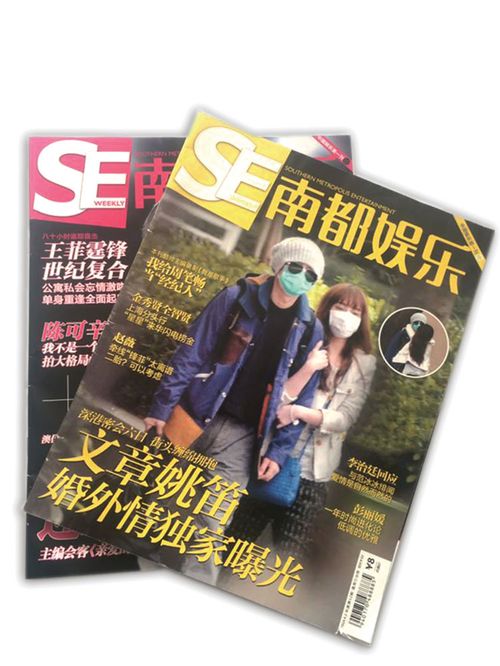 Zhuo has long operated above the fray of the red carpet and long lens, though. Far from tailing celebrities and rifling through their garbage like a typical paparazzo, he worked behind the scenes, identifying targets, spotting clues, and masterminding the investigations. Others took the pictures. In one instance, he surmised that a pair of actors was having an affair simply because they were comfortable eating together in silence. Months later, footage leaked suggesting the two had spent the night in a hotel.

Zhuo started his career as a film reporter at a Tianjin newspaper in 2000, under his real name Han Bingjiang (韩炳江). Two years later, citing differences in “news beliefs,” he left for Beijing, where he met photographer Feng Ke at entertainment magazine Big Star Weekly. It was here that Zhuo had his first big break, snapping a picture of iconic 1980s actress Liu Xiaoqing after her release from prison for tax evasion. Instead of waiting outside the jail, Zhuo had spoken to Liu’s neighbors and discovered her passion for badminton. After staking out the court for two days, Zhuo and Feng clinched their shot.

Tiring of the slow pace of magazine publishing, where reporters mostly serve as a megaphone for celebrities’ PR moves, Feng and Zhuo decided to partner up to find their own exclusives. “If I work as a reporter for 10 years and all I can tell people is that I have been to 200 press events, where’s the fun in that?” he explained to Renwu magazine.

Zhuo’s career soon took off after he and Feng set up Studio Fengxing in 2006, sending out three teams each day to scout for stories—each with a driver, a videographer, and a photographer, with specialists waiting at the studio to edit the images and add sound effects and commentary.

Over the years, Zhuo has been accused of invading privacy, inflicting hurt, and breaking up families; he’s denied it all. “There was an actor who cheated on his girlfriend…He called and accused me of hurting his girlfriend. I told him he’d mixed up the cause; it was him who hurt his girlfriend,” Zhuo argued to news site Sohu Entertainment. In 2015, Wang Feng sued Zhuo for libel, demanding 2 million RMB and a public apology after Zhuo’s report about the singer’s honeymoon referred to Wang as a “top gambler.” Zhuo argued that Wang had indeed frequented casinos when in Macau, and he was simply carrying out his “right of free speech and media supervision.”

Zhuo won the case, bolstering his conviction that stars are often hypocritical when it comes to protecting their image. Celebrities frequently use fake relationships to boost their profile or mend a reputation, and Zhuo maintains there is a double standard when it comes to privacy. “Why don’t they mention privacy when they decide to put their children on TV?” he once asked. “So if they are paid, their children’s privacy no longer matters?” 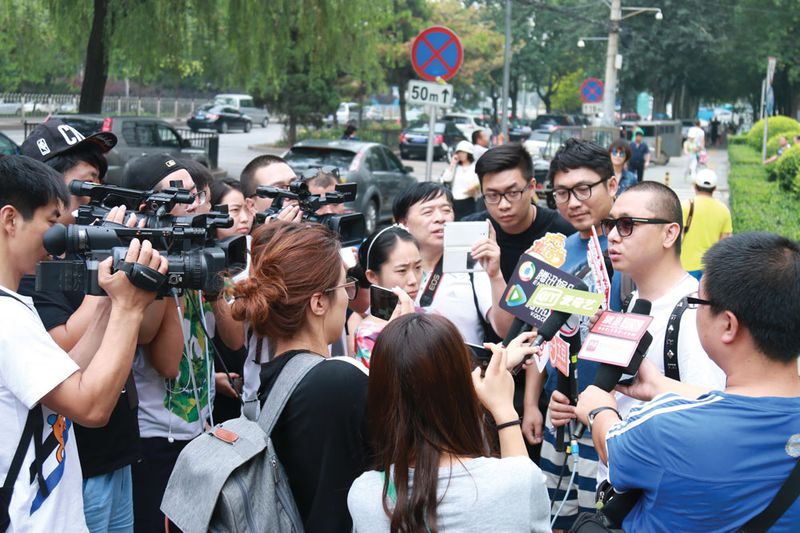 Zhuo has claimed in various interviews that revealing ugly truths is a civic duty. “It’s our right to know, when it comes to a public figure. We cannot be presented with only their good side,” Zhuo said to Sanlian Weekly. “We Chinese often have a misunderstanding that a celebrity or a successful public figure has perfect morals. But it’s quite often the opposite…Behind the halo, there are many hidden, dirty deals.”

Zhuo—now a celebrity in his own right, due to his many media interviews—has been accused of similar shady practices, including posting bogus text messages, manipulating controversies, and making groundless insinuations to promote himself. “Many [paparazzi] simply fabricate stories to generate views. They make money from every click…When did the paparazzi ever leave empty-handed?” wondered the Qianjiang Evening News after news of Zhuo’s troubles broke.

“I am a journalist with integrity and belief in news,” Zhuo declared after being awarded the 2013 Nanfang Media Group “Journalist of the Year” as a chief writer at SE Weekly. In February, Zhuo won “Media Person of the Year” at an award ceremony held by Phoenix News. But even before the June crackdown, cracks in Zhuo’s carefully constructed image had started to appear.

In May, Zhuo’s entire team of photographers collectively walked out, citing his attention-grabbing behavior. “We do not wish our hard work to be used as tools by a certain individual to seek attention,” the team wrote on Weibo.

But many believe the walkout was over disputes with Studio Fengxing’s profit-sharing policy. While Western photographers can sell their work as individuals at market value, in IP rights-unfriendly China, paparazzi often have to deal with the fact that their work is undervalued, and can be easily and frequently stolen. Zhuo built a strong personal brand that claimed ownership of all works from his studio, partly as a bulwark against industry thieves. But some employees felt he used this position to profit unfairly from their work. According to a Tencent article, Zhuo has annual contracts worth 20 million RMB with at least three video sites, Iqiyi, Youku, and Sohu.

Some of his former team have started their own studio, first calling themselves “New Fengxing” and later, “Go Ying.” But Go Ying also fell victim to the anti-vulgarity policy, although the studio was quick to rebound with a fresh Weibo account and an astutely humble apology.

“This was a very profound lesson,” Go Ying announced. “From now on, we will make sure to strengthen our own thinking and moral education.” Zhuo, meanwhile, has remained silent, denying interview requests and refusing to comment on the apparent loss of his main business. But one can be sure that, where there’s people and profit, there will forever be gossip—and people like Zhuo.

Papped is a story from our issue, “Beyond Go.” To read the entire issue, become a subscriber and receive the full magazine. Alternatively, you can purchase the digital version from the App Store.