After a teacher asked volunteers to bring a shrub to class, Ms. Chu gave her son a potted snake plant she already owned. “It was one that he could easily carry to school. A week later, I asked about his plant and he complained, ‘mine is the smallest in the class.’ Every student had brought a plant; I think the parents had gone out and bought them.”

The teacher’s request, it emerged, had triggered a competitive instinct among Chu’s fellow parents, who vied to outdo each other in size. Some were so large, “the parents had to drive the plants to school. The biggest was over a meter tall…the classroom looked like a forest.” Within a week, the snake plant was wilting. Over-watered, and overshadowed by its larger neighbors, “it died.”

The anecdote offers an apt metaphor for how intense competition can crush the spirit of children. But the more literal takeaway might be how China’s education environment locks the parents in a similar destructive cycle with one another, fueled by their own anxiety, as well as their children’s.

The stress peaks during summer vacation, when students are expected to engage in a litany of extracurricular activities that often require parental oversight.

This year, Chu’s son has been assigned almost 20 tasks. “There was one activity regarding fire safety,” she recalled. “We needed to log onto a website and complete a test. My son couldn’t do it. It was far too difficult. I tried and only got 70 percent…This wasn’t my area of study, but I had to learn it as well.”

Students who complete the activities are praised, at the expense of others in class who do not. The issue came up indirectly during parent-teacher interactions. “They made it feel like I wasn’t his real mother, if I ‘cared’ so little about his education,” Chu said.

In a 2015 Pew Global Attitudes Project, China was the only country in which most people thought parents put too much pressure on students—68 percent, in contrast to 64 percent of US parents who felt there was too little pressure. A 2010 study by University College London attributes the problem directly to China’s growing middle class and competitive job market: “The aspirations of many parents, who had limited educational opportunities themselves, are now invested in their only children,” the study concluded. In fact, as a result of the one-child policy enacted between 1980 and 2015, only children also often carry the aspiration and over-attention of four grandparents as well. 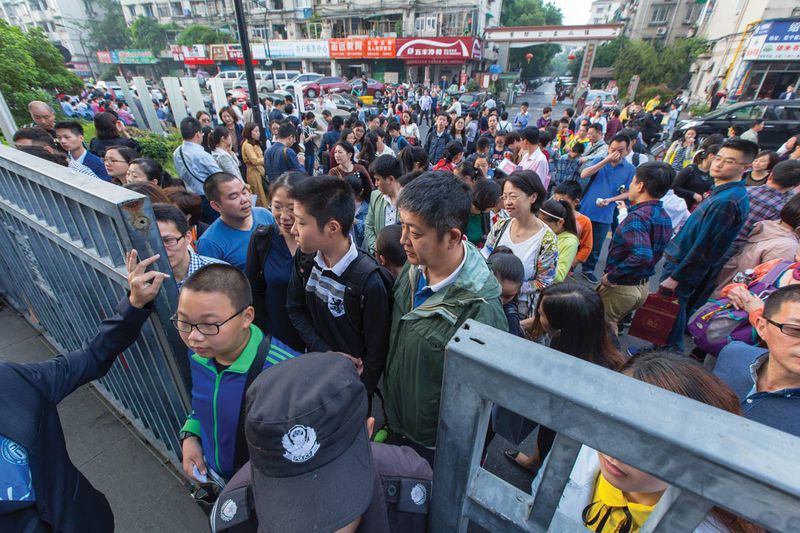 Parents queue with children outside a private school in Hangzhou in May, what may be their last opportunity to attend a good school (VCG)

Education has been an important cultural value in China for at least two millennia: As the Three-Character Classics (《三字经》), a 13th-century distillation of Confucian wisdom, states, “A child should be educated, not just raised, or else the parents are at fault.” The Extended Worthy Aphorism (《增广贤文》), a Ming dynasty (1368 – 1644) primer of Daoist education views, states, “A child’s education must start in the womb.”

In the mid-Tang dynasty (618 – 907), the imperial civil-service examination became standardized, and education had an immediate, real impact on a family’s fortunes: As the only path to becoming a government official, passing the exam was a gateway to upward mobility. Today, the big exam is the gaokao, or National College Entrance Examination, a make-or-break, three-day gauntlet for high school seniors that determines which university they can attend. A good university, in the eyes of many parents, gives an edge in their offspring’s future career, potentially making up for the parents’ own shortcomings in education, connections, or financial resources.

Many parents believe that the best gaokao result, however, is contingent on a selective high school, which in turn depends on attending a competitive middle school—today, the nation’s top preschools have waiting lists and admissions interviews. The high stakes push parents to send their only child to cram classes outside of regular school hours—and increasingly, a litany of extracurricular projects and activities that promise to cultivate well-rounded geniuses with each dance recital and extra English class, besides signaling an enlightened, middle-class approach to parenting.

The pressure-cooker environment caused by the education system echoes through all age groups: a 2010 paper in the British Medical Association’s Archives of Disease in Childhood found that children in Zhejiang as young as 6 were suffering from severe anxiety at school; 80 percent of 9-to-12-year-olds surveyed by the researchers “worried a lot” about exams, and one-third exhibited physical symptoms associated with stress, such as headaches and stomach pain.

While government spending on education has increased steadily by about 19 percent each year, according to a 2015 Xinhua report, household spending on education has ballooned. Market Research groups ICEF Monitor and the McKinsey Global Institute (MGI) indicate that the increase will soon affect the global economy. “Between 2015 and 2030, China is expected to spend 12.5 percent of overall consumption growth on education for those under 30—a higher share than in any other country in our sample, save Sweden, the country with the largest share at 12.6 percent,” ICEF stated, citing the MGI. “On average, education spending makes up nearly half of the per capita consumption of a 20-year-old in China, as opposed to less than 25 percent in the US.”

Parents look for their child’s name on the list of eligible entrance examinees to a prestigious Nanjing middle school, determined by lotteries (VCG)

It’s not just university students. The pressure to perform starts young in China, and accelerates regardless of circumstances. Improved performance only raises expectations.

Sara Zeng, a teacher at an English training institute for children, cited one “typical parent” of a 6-and-a-half-year-old boy. “His English is exceptionally good for his age,” she said. “He never speaks to us in Chinese and he can read lengthy storybooks. But when his mother saw another child pass the Cambridge KET exam at age 7, she became very anxious and asked us to give him more classes.”

It’s often worse for those who struggle. One foreign preschool teacher in Beijing, who asked not to be identified, said that parents who sit in on their kids’ classes get upset if their child is not among those regularly raising their hand to answer questions; in one extreme case, a mother pinched a child to force them to answer. “Often I see this when a child has an obvious learning difficulty which could benefit from professional help,” the teacher told TWOC. “But whenever I speak to parents about this, they dismiss what I am saying and point out, incorrectly, that other children don’t need help, so it’s normal.

“Parents might know that their child needs help but they won’t take this extra step,” she added. “When pressed, they change the subject. I can see that they are struggling, worn out, and stressed. It’s a hard situation because there isn’t much information or assistance.”

Then there is competition between parents.

Chu, a working mother, observed that any fight that pitted working mothers against stay-at-home moms could have no winner—the extra time and attention that housewives lavish on their children may only serve to make them more likely to see a child’s academic success as reflecting their own worth. “There is so much competition,” she sighed. “I try to do my best but I can only finish about two-thirds of my son’s summer activities each year, yet there are always families who can finish them all.”

Like many working parents in China, Chu is helped by her parents, who take her son to activities while she is at work. Family planning policy has meant many children may be the sole focus of two sets of grandparents. This can be a resource, but one that not every child has access to. 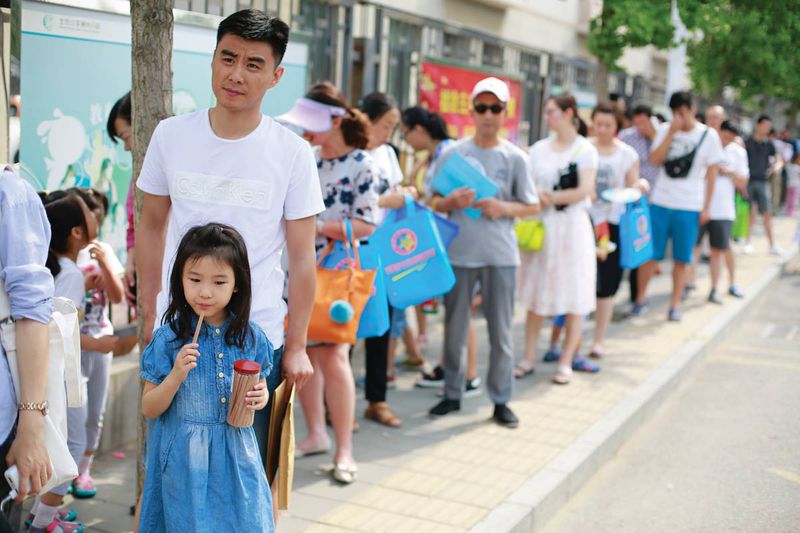 During a blazing hot July day, parents line up for class registration in Beijing (VCG)

The offspring of migrant workers—parents who have moved from rural areas to find work—already face a number of disadvantages because they only have access to education resources where their hukou (household registration) is registered. They face added obstacles registering their children in urban schools, and are less likely to have grandparents around to help out, leading many workers to instead leave their children for the grandparents to raise in the countryside.

In this competitive environment, companies that offer extra education outside of school have become behemoths, influencing the system itself and further intensifying competition in money, emotional investment, and time.

Education giant TAL, listed on the New York Stock Exchange, runs a menagerie of facilities in China including Xue’ersi Excellence Education, which offers mathematics, English, and Chinese evening classes for most ages, and relies on competitive parenting as a marketing strategy.

Xue’ersi’s entrance examinations are deliberately limited by “hunger marketing,” a technique typically used by tech companies such as Apple and Nintendo, where supply is kept artificially low to stimulate demand: Parents who were too slow to sign their children up for the test miss out, with no second chances. According to a Xinhua report in May, some prestigious middle schools in Guangzhou were quietly using Xue’ersi’s competition results for their admissions process.

Strikingly, Xue’ersi elevates parental involvement by permitting them to attend classes. Although voluntary, the option is openly encouraged by the company, which says that parental participation can help students review the complex material that Xue’ersi promises to teach at faster speeds than the typical school. On its website, the company cites a third-party survey claiming that 83.3 percent of clients approve of parental attendance, with only 13.3 percent opposed and 3.3 percent neutral. 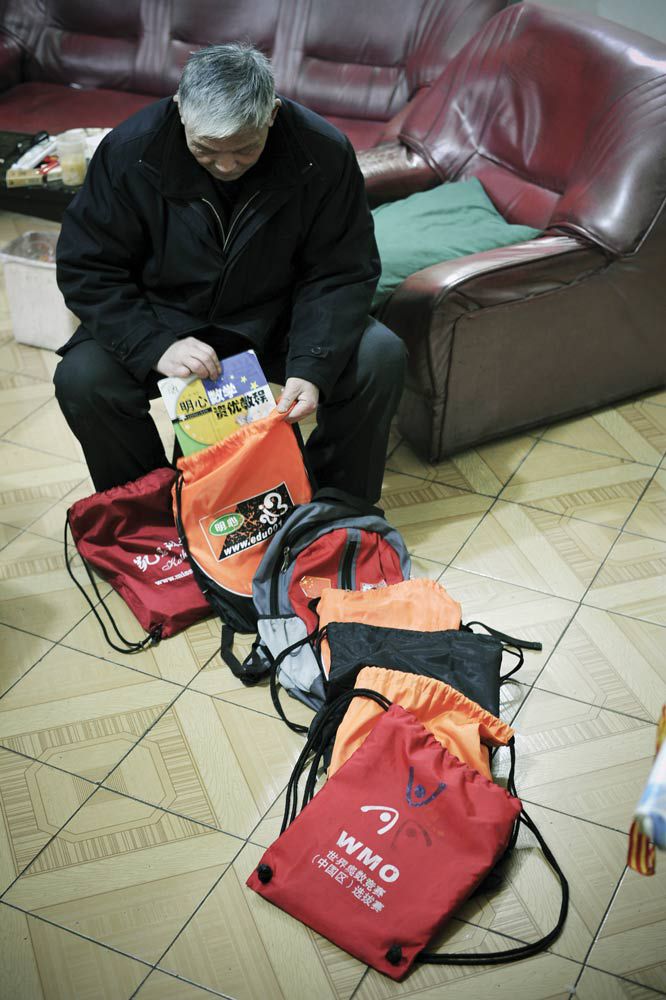 “Parents who attend Xue’ersi classes can learn more about the course and understand their children better,” the site claims. “This way, the parents will not simply blame the child for not studying hard enough if they fail to understand certain points during class.”

As a mainstream company, Xue’ersi is a relatively safe option; there are plenty of dubious companies offering to miraculous results for a steep price. In 2012, one company was exposed after charging parents 100,000 RMB to teach children to “read books in 20 seconds,” and perform sketchy card tricks. The Guardian cited one angry father who said his daughter believed she could read poker cards by touch. Another parent complained, “I found that my child learned nothing except how to cheat.”

With all the intense focus on education, it’s no wonder parents are getting tired of it. Chu, after failing to get a spot for her son at Xue’ersi, instead sent him to football camp.

“He likes football. This, at least, is something I can do for him that he will enjoy.”

School’s in for summer

These are some of the tasks assigned by a Beijing school to an 8-year-old child for his two-month summer vacation. The school is neither exceptionally expensive nor cheap, and is reasonably representative of schools in Beijing. Students who do not complete all exercises are not punished, but their inability to complete the tasks is noted and not-so-subtly hinted at during parent-teacher interviews. Due to the nature of most of these tasks, parental participation is all but compulsory.

Each student has to

Keeping up with the Zhous is a story from our issue, “Down to Earth.” To read the entire issue, become a subscriber and receive the full magazine. Alternatively, you can purchase the digital version from the App Store.