In the bamboo forests of Ningbo, distillers produce a notoriously delicious firewater

Harvest season in the bamboo forests of eastern Zhejiang province doesn’t just mean fresh shoots on the dinner table, but perhaps surprisingly, some of the best rice wine in the country. Brewed and then injected into cavities of a live bamboo plant to mature for about three months, it’s a delicious amber liquid with a thick bamboo aroma.

A century-old local grain store in the city of Ningbo, Wangshengda (王升大), has perfected the preparation method. First, a spirit is made usually the traditional way: Fermented glutinous rice is steamed in a wooden bucket with a metal pot on top. A funnel is placed in between. Cold water is continually poured into the pot so that the steam condenses at the bottom, falls through the funnel, and is collected in another container. The resulting shaojiu (“burnt spirit”) is a strong liquor, around 52 percent alcohol by volume. Here at Wangshengda, the whole distillery process still happens in the village kitchen under the eye of experienced brewers, instead of a factory.

With tanks full of liquor, staff at Wangshengda hike to an altitude of 600 meters into a bamboo wood, planted precisely for making perfect storage containers. A strong, healthy bamboo is ideal, and can hold three “joints” of liquor. Any more will affect the bamboo’s growth, “drinking” it to death. The liquor is stored for about 100 days, as the plant absorbs the liquor and alcohol, causing the ABV to drop to about 30 percent.

There are scattered historical records mentioning various types of “bamboo wine,” but the current method was inspired by the great-grandfather of Wangshengda’s current manager, Wang Luke. It is said this Wang forebear liked to bring wine in a pottery jar with him whenever he went to dig bamboo shoots to eat. One day, his jar cracked a little and started to leak, so he poured the wine into the cavity of a bamboo stump. Days later, he recalled the wine while revisiting the area, so he had a snifter and consequently discovered a fresh bamboo fragrance. Wang’s family then tested various methods and storage periods, and came up with the current system. It is also why Wangshengda gave the brand name “Old Grandpa” to its bamboo wine.

There are of course various health claims made about the bamboo wine, such as the idea that it can “cleanse lungs” and “improve circulation,” although none have been proven. The novelty factor and deliciousness are enough for many Chinese wine lovers. 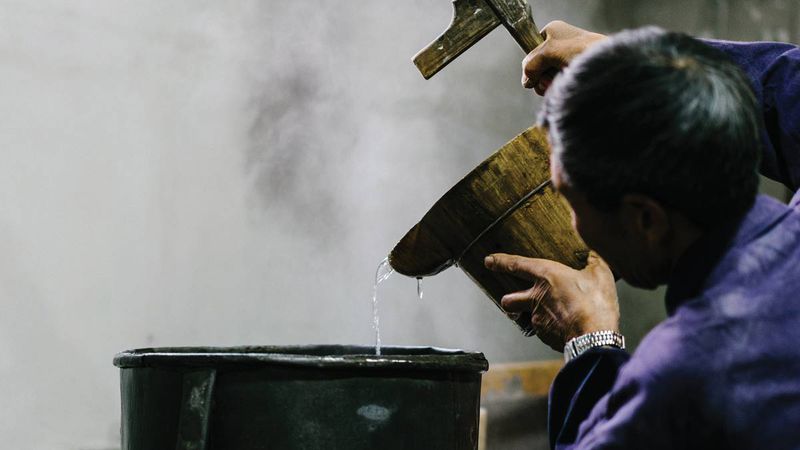 A Wangshengda employee adds cold water to the metal pot, part of the traditional process of distilling rice wine Freshly distilled shaojiu is strong, at 48 to 60 percent ABV 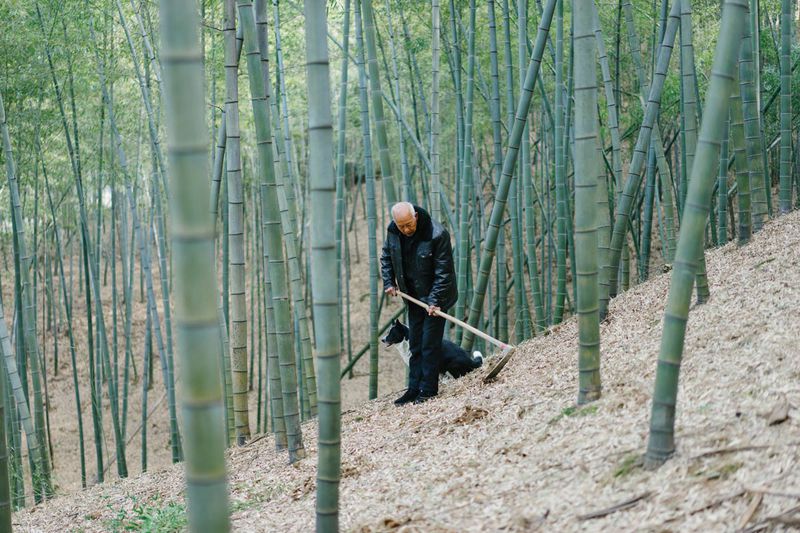 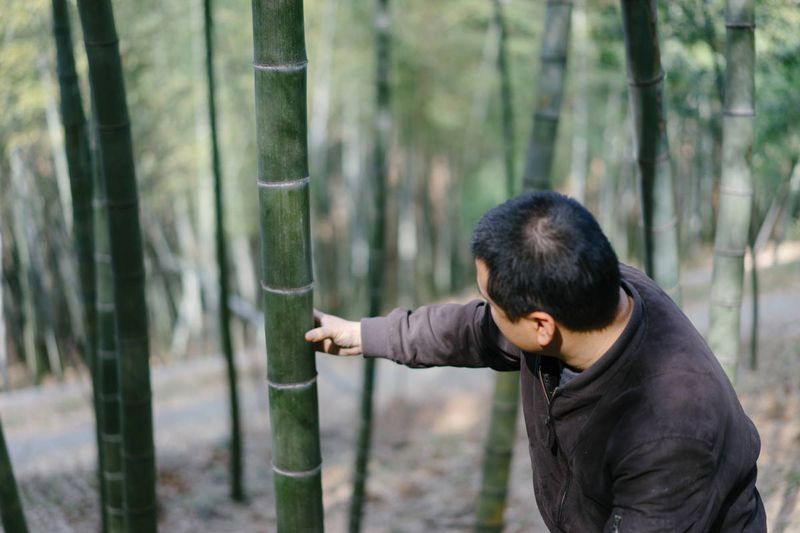 Wang Luke picks out a strong, healthy bamboo plant to store the liqour Through the particular vessels involved have varied, this traditional distillery method has a history of at least 600 years 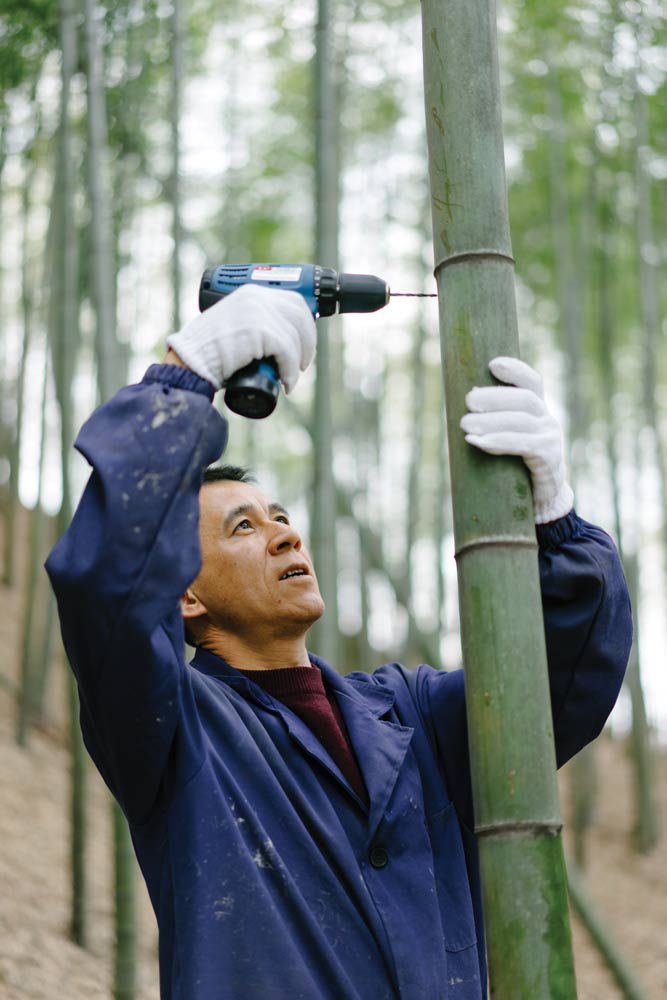 An employee drills a small hole into the bamboo, where the liquid will be inserted 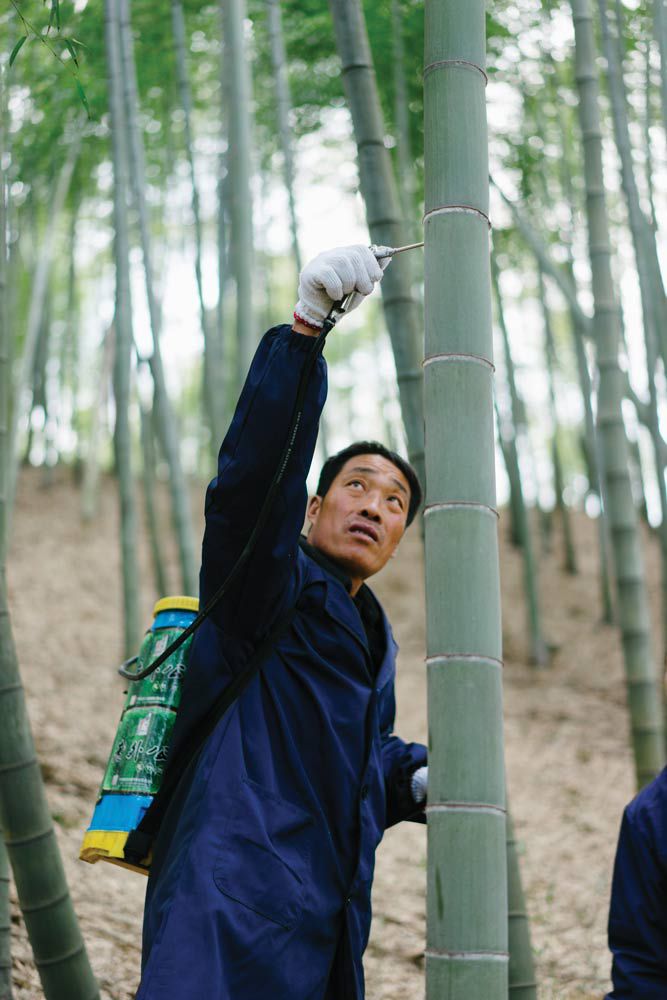 Using a special injector gun, distilled wine is put into the cavity of the bamboo; the wine-filled bamboo is then marked with paint for future harvest 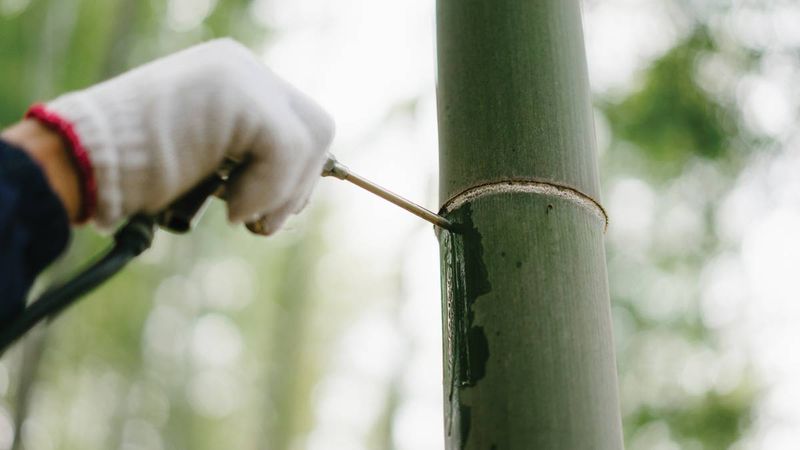 Only three joints of the bamboo should be filled with wine; any more will cause the bamboo to wither 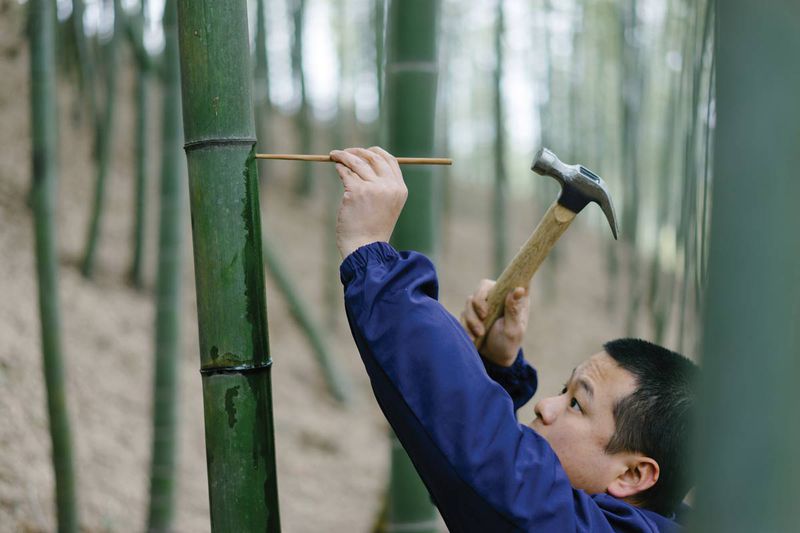 An employee seals the hole in the bamboo with a chopstick 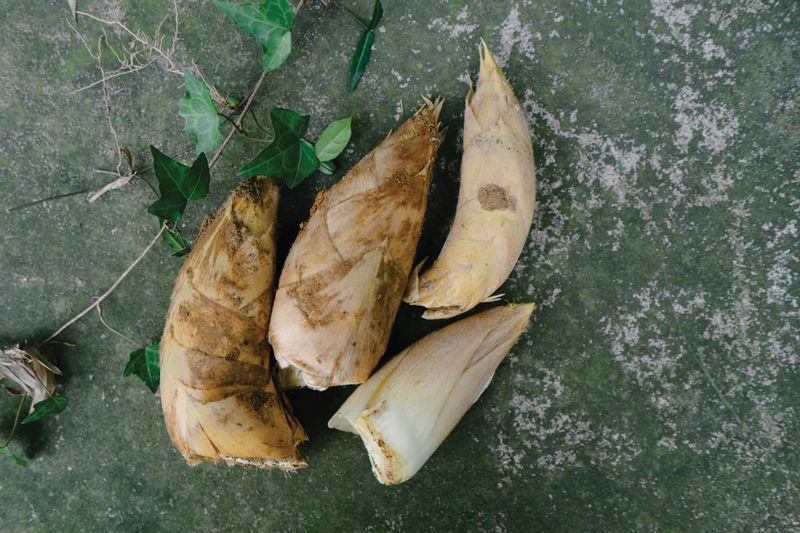 Bamboo shoots are another tasty gift of nature from the forest 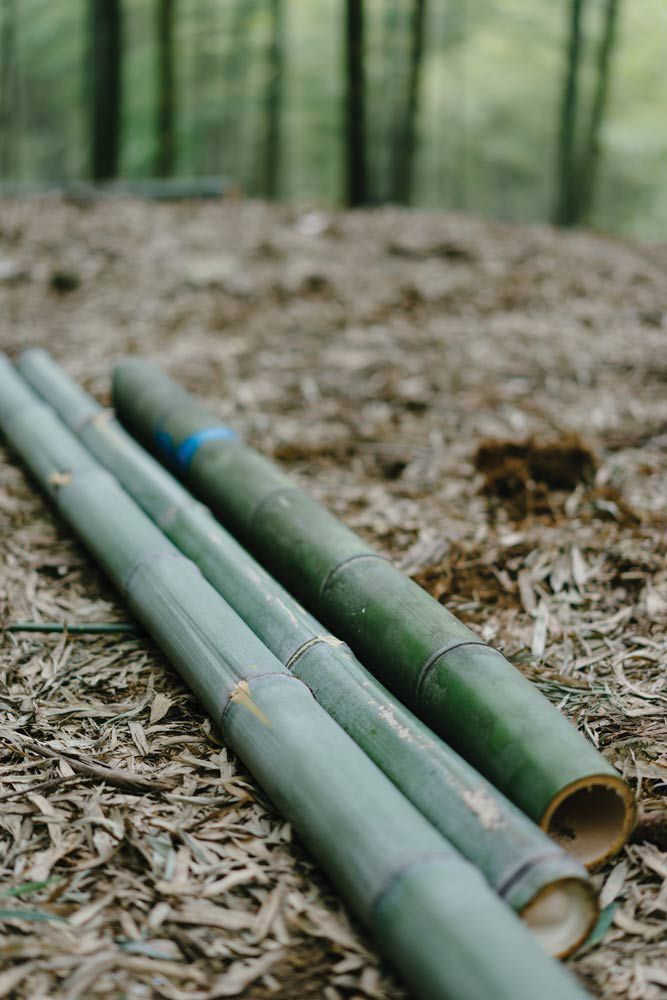 The leftover bamboo can be made into hangers, brooms, shoulder poles, and other handy tools for the villagers 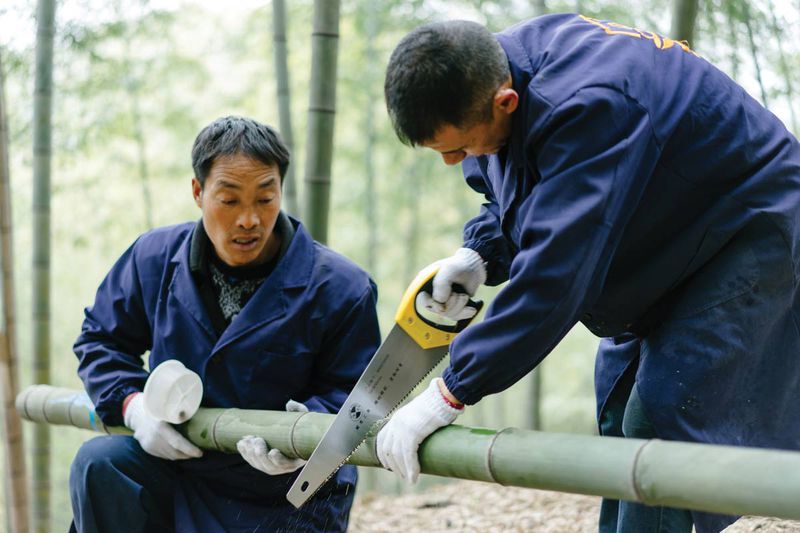 Three months later, the bamboo wine is mellowed and ready for harvest 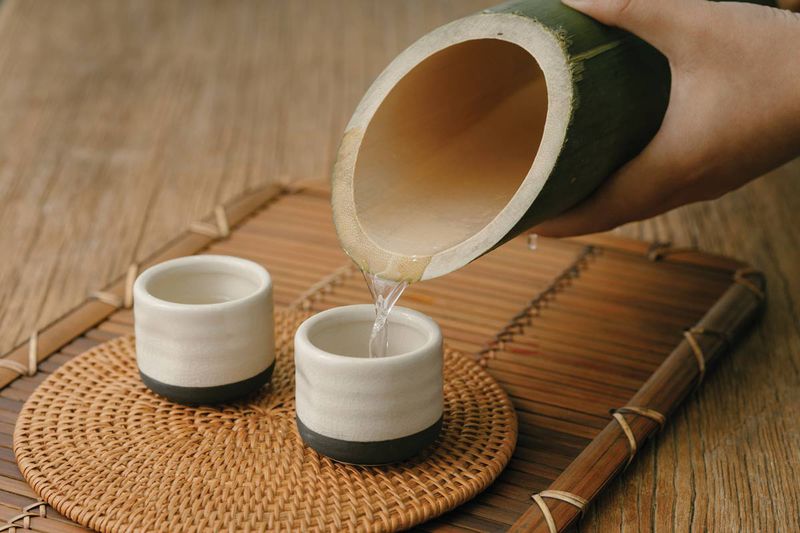 The wine is now less strong but full of the sweet aroma of bamboo, making it a treat for rice-wine lovers

Bambooze is a story from our issue, “Cloud Country.” To read the entire issue, become a subscriber and receive the full magazine. Alternatively, you can purchase the digital version from the App Store. The Legendary Century-Long Life of a Leprosy Patient, Part 1

From wandering the streets to living in a leprosy colony, an ordinary 93-year-old woman recounts an extraordinary century of life Taking the Field: Bringing Sports to Every Village