With Chinese cuisine, you can always expect a riot of taste: “Spicy in the east, sour in the west, sweet in the south, salty in the north,” as they say. Yet our taste buds are still not content even with these flavors. Sometimes, we need a little bit of something else. Something special; something…stinky.

The most famous in this genre is Stinky Tofu (臭豆腐 chòudòufu). With many people scared away by its unique smell—not to mention its name—loyal fans insist this snack is something that “smells smelly, but tastes tasty.” Others say it reeks like rotting meat in summer. It’s made by soaking tofu in a fermented brine of milk, vegetables, and meat. Sometimes, Chinese herbs, dried fish and shrimp are added. The brine is made first and left to fester for weeks, sometimes months, resulting in a putrid, rotting brew. Just as one’s senses can take no more, tofu is added, for further fermentation. Many producers will choose to reuse a successful batch of brine just to recreate the same pungent flavor.

Methods for cooking the fermented tofu vary greatly by region, but can be roughly categorized into “soft” and “hard” varieties. Soft stinky tofu, also called “greenish cube (青方),” is popular in northern areas like Beijing: Wang Zhihe (王致和) Stinky Tofu is the most representative. 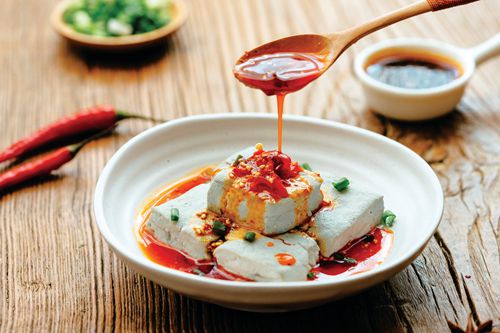 Legend has it this verdant variety was invented in the Qing dynasty by a Beijing tofu seller called Wang Zhihe, who made a living hawking curd after failing his imperial exam. One day, Wang had a bunch of leftover tofu; rather than throw it away, Wang cut the tofu into small cubes and put them into an earthen jar (legend does not explain why). A few days later, a curious, possibly drunk Wang opened up the jar for a look. He found the tofu had turned green and smelled like a sock, so he tasted it (again, legend does not explain why). It was, in his estimation, quite delicious, so from that moment on, he decided to sell that “stinky greenish tofu” as a commodity in his store. Even today, you can still find Wang Zhihe Stinky Tofu sealed in glass jars in supermarkets across China.

Southern folks, though, prefer the hard stuff—tofu, that is. The Changsha version, hailing from Chairman Mao’s home province of Hunan, is the most popular. It is black, deep fried, and heavily seasoned with chili. Huogongdian (火宫殿)  is the most well-known snack street for Changsha stinky tofu; indeed, Mao used to be a loyal customer. The “Beijing School” writer Wang Zengqi (汪曾祺) recalled an anecdote about this in his famous food essay “Five Tastes”: When Mao was young, he often went to Huogongdian to catch a taste of its tofu. After he became the leader of China, he revisited the shop and commented: “Huogongdian’s stinky tofu is still delicious.” As this was during the Cultural Revolution, Mao’s innocuous comment was immediately transcribed on the wall of Huogongdian, with a note referring to it as “the highest direction.” While tofu is the reigning favorite of funk, there are plenty of challengers. The humble vegetable, for example: In Hangzhou, “Shaoxing Three Stinky Food” (绍兴三臭) refers to stinky Chinese spinach stems, and stinky white gourd (OK, and stinky tofu as well), which all go great with a bowl of rice. They’re produced by soaking the vegetables in stinky brine for days, then steaming them right before eating. Local people say that, of the three, the spinach stems are the headiest: Apart from the smell, the texture is like jelly, which makes this dish even harder to accept for rookies.

When it comes to Huizhou, Anhui province, though, that scent in your nostrils is coming from the fish. In The Analects, Confucius told us: “If the fish and meat get rotten, don’t eat it.” But apparently, Anhui people are prepared to repudiate the sage, if Smelly Mandarin Fish (臭鳜鱼) is anything to go by. The dish took off after it was featured in the CCTV documentary series A Bite of China, giving the acrid fish the respectability outside Huizhou that it badly needed. As with our previous contenders, making Smelly Mandarin Fish requires a fermentation ritual in brine at a temperature of around 28 degrees Celsius for several days, until the skin starts to raise a smell. Then the fillets are shallow fried and braised in soy sauce, so the flesh is fresh and tender. 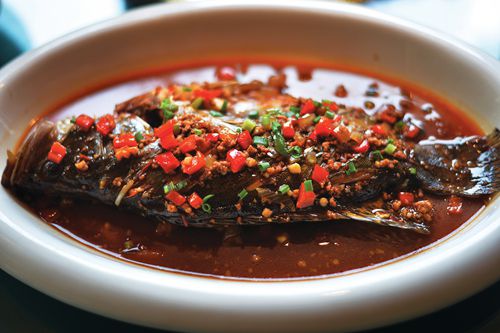 Unlike others on this list, this delicacy is only around 200 years old, which makes it young by Chinese standards. Back in the day, Anhui fishermen in the Yangtze River used to keep their fish from decaying on the way home by rubbing the skin with salt and carrying them in wooden buckets. The fish stayed fresh even after the weeklong journey to Anhui, with only the skin getting a bit whiffy. Nowadays, with transport and food preservation no longer a problem, the smelly salted fish remains a characteristic dish of this region.

If you don’t fancy any of the above, you should at least try Snail Rice-Flour Noodles (螺蛳粉), a Liuzhou, Guangxi province specialty that’s probably the least freaky of this bunch. The noodles are boiled in soup of river snails, pork bone, pickled vegetables, dried bean curd, and fresh green vegetables, with peanuts and chili added to the results. But the most essential ingredient of authentic Liuzhou Snail Rice-Flour Noodles are pickled sour bamboo shoots, made from fresh bamboo shoot that are, yes, fermented and serve as an appetizer or side dish. But it’s the sour bamboo shoot that gives the whole noodle dish its unique flavor. 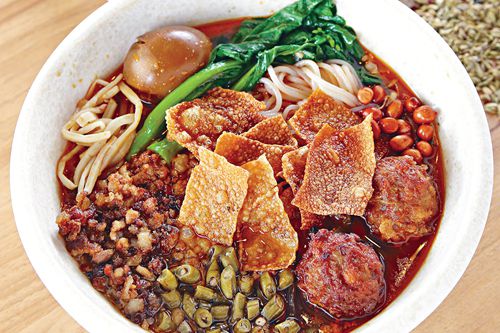 Though these dishes are famous throughout China, stink lovers are still a minority. So, as an unwritten rule, if you want to order a stinky food at dinner, make sure that everyone around you is down with it. If your order passes the smell test, enjoy and count yourself one of the eating elites.

Funky Food is a story from our issue, “Fast Forward.” To read the entire issue, become a subscriber and receive the full magazine. Alternatively, you can purchase the digital version from the App Store.