Viral Week is our weekly round-up of the previous weekend’s trending memes, humor, rumor, gossip, and everything else Chinese netizens are chatting about. Think of this as a heady dose of allergy medicine that jolts you awake while catkin flies into your hair…your clothes…everywhere….

This week, we look at awkward surnames, WeChat’s LGBT crackdown and U-turn, and China’s unluckiest fugitive. But first…

Dr. Tan Qindong, a Guangdong physician and one of many people involved in exposing last year’s fake medicine scandals, is now being sued by an Inner Mongolia drug manufacturer for “damaging the commercial reputation” of their brand, police in Liangcheng county, Ulanqab, revealed on Sunday.

In December, Tan wrote a blog post titled “Hongmao Medicinal Liquor, Poison From Heaven,” that accused the medicinal drink—especially popular among senior citizens—of using toxic Chinese herbal materials. It also noted that there was no evidence for the medicine’s claims to cure serious conditions like coronary heart disease, thrombosis, and hair loss. Despite the apparent civil nature of the legal case, Tan was detained by police in January.

The police’s recent statement clarified certain points for Tan’s family and netizens, such as on what grounds the police made their arrest, while opening up whole new cans of worms—apparently, a police case opened by the drug company against Tan spurred a cross-(provincial)-borders manhunt and three-month-long detention. The company is suing the whistleblower for 1.4 million RMB, which they claim is the monetary and emotional damage sustained from seniors who went out for Hongmao’s blood after the original blog post was shared. The case is ongoing. 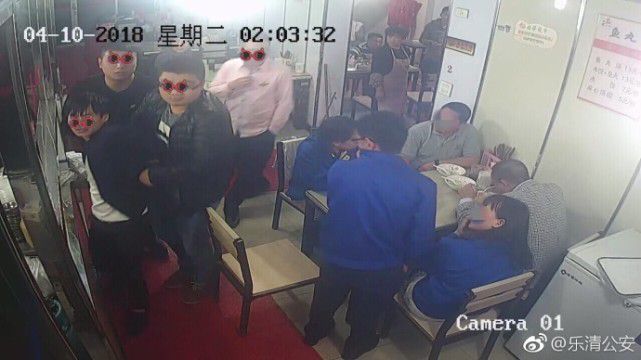 Don’t brag about your exploits here: It’s like robbing a donut shop in the US (HNR)

Flirting in a crowded restaurant can be a risky endeavour. There are many ways it can end in public humiliation—or much worse, as one unlucky criminal in Wenzhou found out.

According to surveillance videos taken at a humble fish ball restaurant at 2 am, a man is seen bragging loudly to two women and two other men at his table about his illegal exploits. Unfortunately at the next table, there are 11 plainclothes policemen grabbing a bite after their shift.

And that was how a fugitive from justice was apprehended at a restaurant  last Tuesday. His alleged crime is, as yet, unknown.

One of many posts on Weibo, though the hashtag has been banned

Though there’s been cautious progress in recent years, and tolerance is on the steady rise in major cities, the Chinese LGBT community still suffers from discrimination, and are often victims of prejudice, assault, and forced conversion therapy. China’s official stance is often described as “not encouraging, not discouraging, not promoting” homosexuality. In 2015, the State Administration for Film and TV issued a regulation dictating that shows are not supposed to represent homosexuality.

To supposedly comply with online cybersecurity laws from last year, on April 13 Weibo launched its latest campaign to “further build a clear and harmonious community” by inspecting and deleting cartoons and short video content that is sexually “explicit, promoting violence and homosexuality.” The announcement triggered outrage from the LGBT community and netizens alike. The hashtag “#我是同性恋”(I am gay/homosexual) began trending on Weibo, under which many LGBT users came out or flaunted their sexuality by posting their photos, either with a partner, or alone, as an act of defiance.

Twelve thousand users have followed the hashtag, which generated nearly 100 billion reads in a single day. On Wechat, articles on the incident was shared with many declare, “we are all homosexuals today.” This morning, Weibo’s administration account announced that this latest round of “cleaning up will no larger target homosexual content”—just all sexual content in general. So, a victory (of sorts).

What’s in a name? A lot, apparently

You can pick your friends, but not your family—or family name. But a man surnamed Gou from Henan province recently tried to fight this adage.

As Henan’s Dahebao reports, Mr. Gou became the father of a second daughter a month ago, and went to the police station to try to change her surname, claiming Guo is “too embarrassing.” In Chinese, the surname 苟 is a homonym of “dog,” and when acquaintances add the characters 老 or 小 to show respect, it ends up sounding like “Old Dog” or “Young Dog.”

According to Mr. Gou, his entire family, including his brothers, nephews and nieces, and even his older daughter, have already changed their name to the similar-looking Jin (敬), but the cops refused to do it for his new daughter—for unclear reasons. Perhaps he might feel better to know he’s not alone? Statistics from 2006 show that there are about 330,000 people surnamed Gou in China, making it the 237th most-common surname. A few other awkward ones include: