The rigamarole of China’s “miracle doctors” (神医), individuals who masquerade as medical experts in order to peddle dubious drugs and supplements on TV, continued this week as media clamored for harsher penalties for the drug companies and TV stations behind the con, while wondering if the arrests made so far have been mainly for show.

The controversy began in late June when various Chinese media outlets, most prominently The Paper, revealed that a supposed medical expert called Liu Hongbin had been shown endorsing a variety of medical products on TV under different credentials, changing her professional identity as many as nine times in three years. Several cures she helped advertise had been cited by the authorities for false advertising in the last three years, with the TV station hosting these ads fined up to 14,000 RMB.

On June 28, the police in Huai’an, Jiangsu province, arrested another TV doctor, Hu Zuqin, and 45 other individuals for false advertising, though China Youth Daily reports (in Chinese) that least one of the products that Hu endorsed is still on the market. Chinese social media also sprang into action by publishing a list of “four big miracle doctors” including Liu, who have been making the provincial TV circuit for up to a decade and still remain “at large.” As the public continues to call for the blood of these individuals and the corporations behind the scenes, let’s take a look at what has been uncovered and what remains a question mark in this ongoing saga. The fountainhead of the current controversy is the grandmotherly Liu Hongbin (刘洪滨 or 斌 depending on the appearance), who’s first known to have appeared in the guise of a generational folk medicine practitioner specializing in cough treatments from the Miao ethnic group on Tibet TV. Some of her other identities include a diabetes expert from Peking University, descendant of a famous Mongolian doctor, a freckle-removal expert, and a vice-president at the China Association of Chinese Medicine (specializing in cough treatment again, at least). The association has denied the existence of any such person. 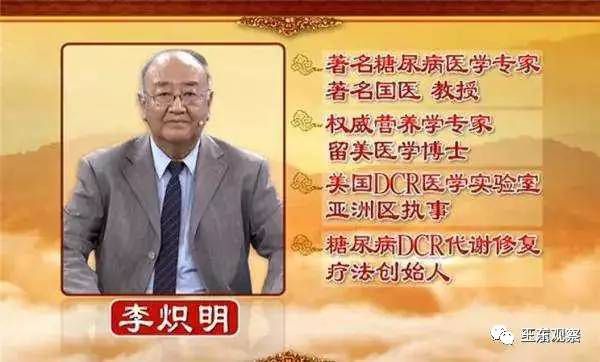 Liu’s male counterpart, the grandfatherly Li Chiming (李炽明), foregoes the ethnic packaging and instead loads up on the foreign-sounding credentials. The picture above identifies him as the Asia regional head of something called the “American DRC Medical Center” and originator of the “DRC metabolic repair therapy” for diabetes, with a PhD in nutritional studies from the US. Since the controversy began, Li has told Beijing Youth Daily (in Chinese) that he is a real (retired) doctor and doesn’t regret the content of the ads; however, he also claimed to have never watched the ads to see how he is presented. The paper also reported that Li was now taking a “sabbatical” from medical consulting for health reasons. 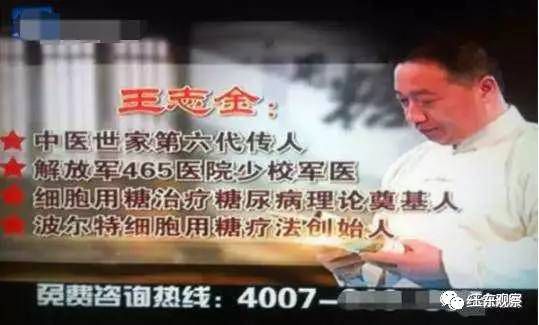 Wang Zhijin (王志金/今), another TV expert whose name seems to change with appearances, seems to have stuck to TCM as his expertise area. As pictured above, he has been packaged as the sixth generation of a TCM-practicing family, surgeon at the PLA 465 Hospital, and inventor of two different therapies for diabetes. One of his products, the “Old Recipe for Inverting Sugar,” a drug that with supposed benefits for liver, kidney, heart, and brain, was cited for false advertising by the food and drug administration of Zhuzhou city, Hunan, in 2014. Gao Zhenzhong/Zhenzong (高振忠/宗), the last doctor, takes the “generational expertise” route to new heights by claiming to be the 12th generation of a kidney-treating medical lineage. He also purportedly cures eyes, the gall bladder, liver, and strokes.

In the week after Hu’s arrest, the public is also calling for the investigation of Cao Qinghua, a purported doctor from Shanxi province and generational TCM practitioner who has supposedly been studying medicine since age 12 and practicing since age 19, according to her official website. Unlike the above profiled TV doctors, who simply appear as expert consultants on health-themed shows, she actually lends her name and face to a brand of drugs for sufferers of rheumatism and stars in her own ads.

The media has been drawing question marks over Cao’s status as early as 2015. The China Business Journal reported (in Chinese) that the hospital she worked for in Shanxi appears not to exist, the national TCM association at whose “rheumatism research department” she claims to be vice-president knew no such department or person, and her official website appears to be run by a different drug company in Guangzhou. Cao Qinghua-brand drugs have been cited for false advertising in numerous regions but remain on the market.

In both the 2013 and 2016 editions of CCTV’s “315 Gala,” the national broadcaster’s annual tribute to World Consumer Rights Day, health supplements called endorsed by a TV doctor known as Song Yifu were exposed as fake and Song’s medical credentials called into question. These ads, however, appear to not have been pulled from the air after, and in the past two weeks, the Beijing Youth Daily, CE Weekly, and Health Daily (a publication under People’s Daily) have all launched investigations into what Health Daily calls “the chain of benefits” behind fake health products. CE Weekly reports (in Chinese) that a number of websites for products endorsed by the “four big doctors” can no longer be accessed and the companies have refused to answer calls. Apart from the arrest of Hu and her collaborators, however, no further action seems to have been taken by the authorities.

“Patients” who come to consult the four doctors on their shows have also been revealed to be hired actors. Some highlights from Liu’s shows, as compiled by Southern Metropolitan News, include a patient suffering disfigured joints and a years-long wheelchair user who was able to get up after Liu treated her on-air. Beijing Youth Daily was also able to reach a company that produced one of Li Chiming’s ads. “The audience, patient, host—we’ll provide all of that. If [the client] has an expert, we can put the expert on; if not, we have them,” an ad director told the paper (in Chinese). According to the director, the cost of hiring an expert is around 5,000 RMB, whereas hiring an actor to impersonate an expert costs 1000 RMB. No ad companies or TV stations have been held responsible for producing these ads yet.

No governmental body has officially commented on the issue yet, but an op-ed (in Chinese) appeared in People’s Daily last Friday urged the “relevant departments” to tighten their enforcement of laws against fake traditional Chinese medicine (TCM) practitioners and support “skilled folk TCM doctors…keeping the flame of TCM alive among the people.” The public is urged to welcome the central government’s new TCM laws, which went into effect on July 1. The law provides new guidelines for accrediting TCM doctors and makes it easier for folk specialists to gain professional evaluation and accreditation. “Though [the miracle doctors] have nothing to do with TCM, TCM is ‘carrying the wok’ for them,” the piece states. “These ‘weeds’ growing freely in the garden that is TCM adversely affect the reputation of TCM.”