“The Rick and Morty special SzeChuan Sauce has arrived in China!”—words that no Chinese person has ever thought, or likely will ever utter. The bizarre phenomenon of truckloads of American edgelords and Morty fanboys fighting and bemoaning the McDonald’s promotion frankly baffled Asia, and made Americans look nuts; like Asians are often depicted in certain foreign media, for example. 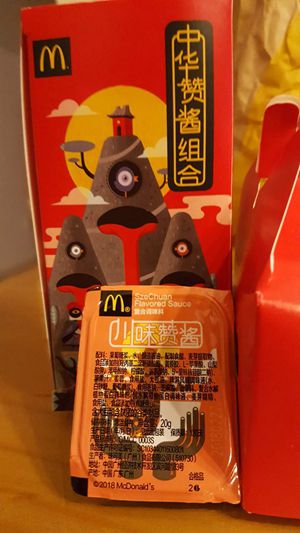 (For a full recap of the sorry episode, there’s this). Then, just last week, another bombshell dropped:

In a completely unforeseen move to bring the fandom-driven sauce craze to the PRC, McDonald’s China has announced a limited run of the sauce, alongside a new ‘Kungpao Flavored Sauce’ – both marketed as an accompaniment to the chain’s signature Chicken McNuggets, from March 28 – April 17.

According to promotional materials, the sauces will be provided with the purchase of certain chicken nugget sets and will be available at unspecified stores across the country following the end of breakfast service.

Never one to shy from a spot of serious investigative journalism, I duly went to check these bad boys out. Indeed, as I strolled past a Beijing bus stop, there was already giant poster pushing the PRC promotion. This was clearly big news: breaking stuff.

I purchased the promo kit: a handsome box of 20 nugs with an equally attractive accompanying tray of three sauces: the Rick and Morty (aka the good stuff, but here known simply as SzeChuan Flavored Sauce, because that particular famous cartoon doesn’t have much more than a niche following in China); the Kungpao; and the Sweet n Sour, essentially the friend who quietly tags along to every McNugget party on the mainland, so why not. This kit costs a hefty 30 RMB, about 5 USD, which is more than even a Big Mac Meal, for the love of Lenin. Plus… no drink? OK, Ron, OK: Your call.  After all, I’m the schmuck who’s paying.

As usual, the cardboard nuggets were hard to distinguish from the box: as arid and appetizing as the Gobi Desert. But what about the sauces, eh: How was the money shot? Here goes: 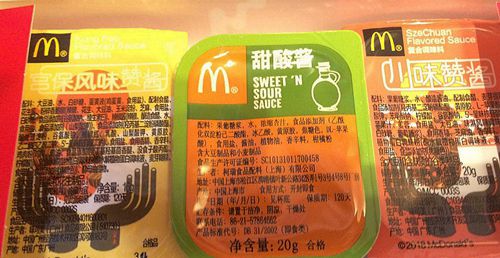 The SzeChuan: Tastes like disappointment. It’s not spicy (or Sichuanese) in the least. The taste is more like a sweet soy sauce, with a touch of plum. A generous soul would compare it unfavorably to the “hoisin” glazed dip that accompanies a good Peking Duck, only milder and more saccharine. It’s fine. But not worth fighting over, driving 60 miles, or paying ludicrous sums on eBay for.

The Kungpao: OK, shit just got real. This may be the most interesting dipping sauce that Ron’s ever sold in the PRC. A low bar, true, but look at this picture (below) and tell me you’re not, at least, intrigued. The taste is OK… not totally to my liking, but then, despite guzzling them whenever a bartender places a bowl nearby, I have no great love of peanuts, which are the main ingredient here. I’d describe the taste as similar to the dipping sauce typically served with Thai satay-style meat skewers, with an extra zing, sadly punctuated by artificial additives and the haunting thought that some peanut farmers probably got steamrollered by Ronald’s supply chain just to keep us all in Kungpao Sauce but, hey—that’s McDonald’s. If you eat there, you have to pay the blood price.

So there you go… Now I’m off to sell one of those unique, fancy presentation trays of average SzeChuan Sauce on eBay for millions of kuai, hopefully.

Robert Foyle Hunwick is a contributing writer at The World of Chinese.