Wu Jing dreams of a day when “European offspring travel to China for a glance at their ancestor’s antiques.” For the French-Chinese philanthropist and art collector, “someday in the future,” the expensive, time-consuming pilgrimages taken by generations of Chinese art-lovers to Europe will be “reversed.”

A certified antiques horologist, known to fellow connoisseurs as the “Queen of White Marble” for her extensive French marble sculpture collection, Wu seems an unlikely figure for such patriotic ideas. Raised in France, and hailing from a Wenzhou family that made its fortune in the hospitality industry, Wu trained in watch-restoration and auctions off her European art and antiques collection each year in Hangzhou to support various charities.

In 2017, she took on a new role: director of the Hangzhou European Art Museum, a new free venue for art education in a city known for its literary and aesthetic roots. It took only a year to assemble the nonprofit museum in the basement of the Hangzhou Library, which has offered gratis accommodation for the next three years. The September opening ceremony in 2007 was attended by directors of the Louvre, the Rodin Museum, and the Philadelphia Museum of Art.

As director, Wu is often personally on hand during the museum’s visiting hours to offer commentary on each of the 75 exhibits, displayed across 11 halls. “I wish I could tell…all the stories behind these pieces,” says Wu. The majority of exhibits come from Wu’s own collection, acquired at auctions around the world. “These sculptures are not just standing there, they have their own stories.” 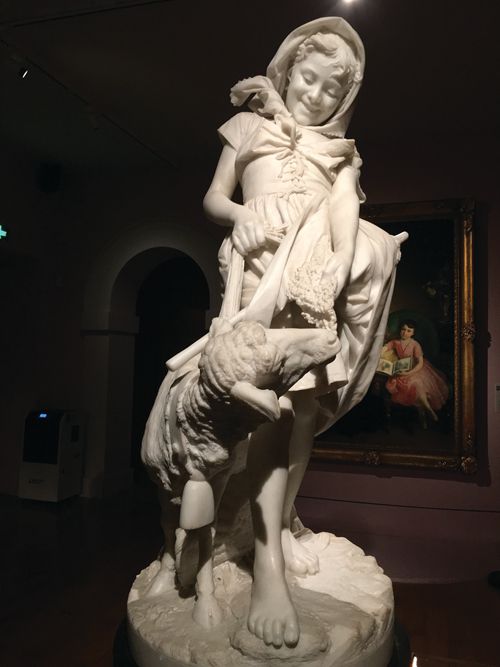 One tale concerns her purchase of A Veiled Woman, sculpted by G. Croff Milano in 1853, a rare example of non-profiteering in the art world. As Wu tells it, she spotted and immediately fell in love with the valuable work, known as “the Mona Lisa of sculpture,” at the Biennale des Antiquaires, but was unsure of how she could afford it. When she told the owner of her plans to establish a non-profit museum for Chinese unable to travel abroad, he dug out the original receipt from the 1970s and offered her the same price. “I finally found one who doesn’t treat [art] as speculation, but loves it from the bottom of her heart,” he reportedly told her: “You are the one.”

It wasn’t until 1996, when antique collector Ma Weidu established the Guanfu Museum, that the first private museum opened in China. Since then, numerous private collectors have opened museums of varying sizes and themes, from the Great Wall to Lei Feng to the Cultural Revolution. Some charge entry fees; others open by appointment only. Even so, the management costs can be taxing. In the US, wealthy patrons can provide endowments to assist with the costs, but most museums need a profitable business model or a financially independent founder.

A 2015 State Council Regulations on Museums, encouraging enterprises, institutions, public organizations, and citizens to establish museums “in accordance with law,” is expected to help matters. Wu’s museum, which was designed with help from the Louvre, will still operate at a loss, despite its “priceless” collection.

Increasing Hangzhou’s artistic reputation, according to Wu, is like “a business card.”  Compared to the strict safety checks and enclosures of large state-run museums in China, Wu’s management style is loose and welcoming; most of the works haven’t been put behind protective glass. “I wanted more art students coming to my museum, observing the sculptures and drawing them on sketch books,” she explains. “If there is a glass dome, the light will reflect and distance the students.”

One student recently returned from four years abroad told TWOC the museum “looks nearly the same as ones I visited in Europe. Most of us don’t know much about European art, especially the Renaissance. But now, even a child may quickly get a rough idea of what it is.” The museum gives Chinese students the chance to view originals instead of sketching from plaster models. When a professor from the China Academy of Art visited, he was shocked to see a white marble statue of David, exclaiming, “It’s the first time I’ve gotten to see the real thing!”

Chinese law once forbade rare foreign relics with “historic and artistic value” from being taken out of the country, but Wu intends to continue even after her lease expires at Hangzhou Library. She has recently been authorized to establish an official branch of the Rodin Museum in Hangzhou, the first of its kind, and with visitors discovering her antiquities for the first time, Wu seems to be delivering on her promise: At this museum, everyone, no matter who or how wealthy, can enjoy European art to the full.

For Art’s Sake is a story from our issue, “Vital Signs.” To read the entire issue, become a subscriber and receive the full magazine. Alternatively, you can purchase the digital version from the App Store.

Lu Dan is a contributing writer at The World of Chinese.