In the latest stage of China’s lunar exploration, a tracking and data relay satellite (TDRS), or “Queqiao” (鹊桥, Magpie Bridge), was successfully sent into space on May 21 to prepare for the Chang’e-4 probe’s arrival at the far side of the moon later this year. The aptly named “magpie” is so called after the bridge that brings Niulang and Zhinü, two star-crossed lovers from Chinese folklore, together for their annual reunion in mid-autumn over the Heavenly River (Milky Way).

Chang’e-4 used to be Chang’e-3’s backup. After Chang’e-3 successfully accomplished its mission in 2016, scientists decided to upgrade and repurpose Chang’e-4 to land and probe the far side, which will be humans’ first soft landing and surface exploration in this area. Due to gravitational locking, signals cannot be directly transmitted back to Earth from this area and so the Queqiao TDRS will serve to relay communication, including commanding a Jade Rabbit-like moon rover. Queqiao also carries the Netherlands Chinese Low-Frequency Explore to detect electromagnetic radiation from the early universe.

Didi has promised to investigate, but users are increasingly  growing impatient with the app’s lackadaisical approach to their safety. In April, a Shengzhou driver who was filmed making “vulgar motions” around his groin  was detained and fined by police, and sacked by Didi—but there was outcry when police prosecuted the female passenger who filmed his behavior, along with her friend, for “spreading pornographic imagery.”

Last year, a woman was robbed and killed by a driver using a fake license plate to evade Didi’s tracking system (he was apprehended); there have also been numerous rapes and robberies by drivers, prompting Didi to run more background checks—a move which resulted in thousands of Didi drivers in Shenzhen being expelled for their criminal, drug, or mental health history. Many wonder how many more are out there.

Amber Alert in the Digital Age

Missing children has long been a serious problem haunting Chinese families, but in the digital age, technology and new media are helping the police to respond faster, while engaging a wider local community. On May 24, China’s Ministry of Public Security announced the completion of phase four of the Missing Children Alert Platform, otherwise named the “Reunion System.”

On receiving case reports, local police can register details, especially the description of the missing children and their photos, while the system alerts the local community through its 25 new media and mobile app partners, including Amap, Sina Weibo, Taobao, Didi, Tencent News, and a series of top players in the industry, covering as wider an audience as possible.

Depending on the children’s location, within the first hour of going missing, an alert will be send within a 100km radius, and expand with the progress of time. As of May 15, since the system went online in 2016, 3,035 alerts were sent out through the platform and 97.6 percent of missing children were located; most were reunited with their families; 140 were found to have died of accidents. The platform also releases case updates in order to fight rumors surrounding missing children cases. 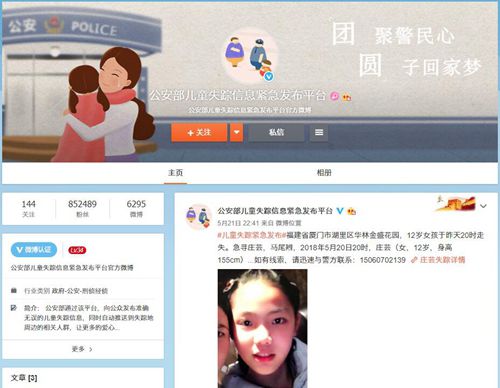